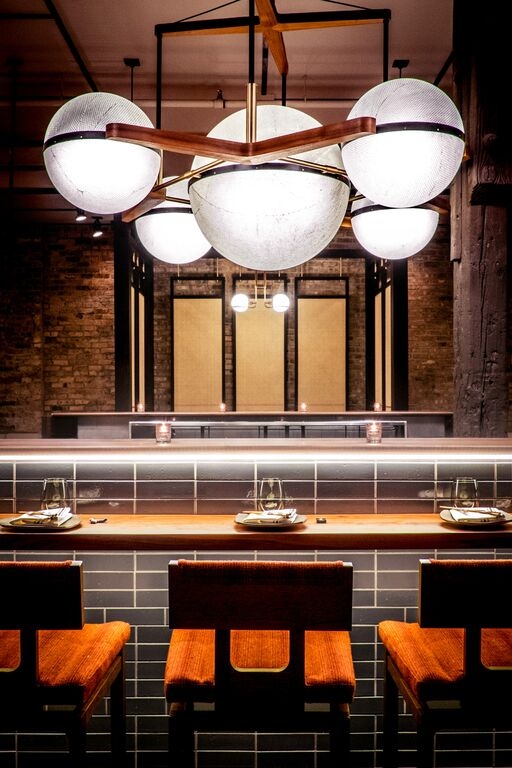 Celebrated architecture and interiors firm Avroko does all kinds of projects for clients big and small, but it is especially prolific and esteemed in the field of hospitality. With three offices (New York, San Francisco, and Bangkok), the firm has won two James Beard awards and is responsible for trendsetting spots like New York’s Saxon + Parol, Public, and the Stanton Social. They also designed the Thomas in Napa and Calypso in Shanghai, the latter of which saw the firm collaborate with Shigeru Ban.

Led by four partners—Kristina O’Neal, William Harris, Adam Farmerie, and Greg Bradshaw—Avroko’s debut project in the city of Chicago is the recently completed Japanese fine-dining restaurant Momotaro. “Chicago has been developing a world-class hospitality scene for a while,” O’Neal says. “We were just waiting for a project that was the right fit.”

The partners started by reflecting on how the cuisine’s origins would affect the design, and narrowing the focus of that inspiration. “Although we’re constantly inspired by traditional Japanese design, architecture, and culture, we were keen to explore some less-told stores within Japanese history,” Harris says. “One of the places we visit every time we travel to Tokyo is the Hotel Okura, because it encapsulates such a unique mash-up between classic and 20th-century Japanese design values.” The midcentury style of the hotel became the primary driving influence of the restaurant’s design—which, as Harris describes it, is “embodied by the East-meets-West merging of architecture, design, fashion, and even business culture of the ‘50s and ‘60s.”

Though the restaurant, run by Kevin Boehm and Rob Katz of Boka Restaurant Group, is a formal one, Avroko still had fun with playful and highly creative details, like an installation that lets guests learn Japanese through an interactive pink telephone. “We had a friend run around Tokyo and find a vintage pink phone, and then we researched and found Japanese audio clips about film and music, and had them programmed into the phone for guests to play with,” Farmerie says.

Another example: screens that decorate the dining room, which the team had woven with a continuous line of red thread marking the height of the average Japanese man in the 1960s. There is also an installation of pen strokes, for which the firm commissioned four different artists, and a stamped glass wall of traditional Hanko wax seals at the restaurants entrance. “All these details,” Farmerie days, “are how we put our stamp on a project and create a little bit of an inside joke with ourselves and the client.”

Gam Fratesi on Boredom and Creativity, and the Emotion Behind Their Products