A Shamanic Temple Bar Is Growing Plants in a Windowless Basement

A local design firm creates a temple to cocktail culture in Mexico City.

Estudio Atemporal—from the Spanish meaning “timeless study”—is a multidisciplinary group of architects and interior designers who formed in 2011 to create spaces that both spark current conversation and endure as the years progress. Where better, then, to find inspiration for their latest bar project than shamanism, the ancient philosophy of astral projection?

Xaman is located on a dark alleyway in Colonia Juarez, a neighborhood whose creative energy is the result of ‘60s-era artists and writers from the Ruptura movement colonizing an area that was once home to the city’s affluent class, but fell into disrepair.

Architect Luciana de la Garza spent two months designing the space, which is accessed via an unmarked door and a staircase to a subterranean lair. Many visitors get lost trying to find it for the first time—a cornerstone of the design. The bar is meant to be a discovery and a journey into the unexpected.

The wonder begins at the entryway as patrons emerge into what feels like an ancient greenhouse. Dozens of live plants—from spiky Mexican succulents to tiny trees with twisting trunks—grow heartily in dim light. Glass terrariums full of earth flank strange relics; some acquire from healers, others reproductions of antique pottery.

Art director Christopher Lagunes created custom, interior-lit display shelves from polished wood with a think slat design that’s duplicated on the ceiling. Soft light pours through, creating lined shadows on the walls, and the cabinet openings repeat a curvy arch pattern that offers a game of hide-and-reveal as you move through the space. “This is one of my favorite and most delicate elements in the bar; it’s a tiny museum that tells a story,” de la Garza says. “I like to see people when they first enter because they stare for a while.”

Growing living plants in a windowless basement presents challenges. Artificial lighting systems that mimic the sun are used during off hours to keep the photosynthesis cycles normal. The species are rare: all endemic herbs, trees, and cacti used by shamans in the country since pre-Hispanic times.

Behind the dark marble bar in the main room, apothecary jars hold mysterious infused liqueurs and tinctures. Elevated cocktails have been a subject of recent popularity in Mexico City, and Xaman’s are made with dynamic Mexican ingredients such as aromatic hoja santa, or “sacred leaf,” and xoconostle, a sour cactus fruit used in traditional medicine. They’re buoyed by touches like dried grasshopper salt and glasses carved from gourds.

The space reminds of Russian nesting dolls, as a private room off the dance floor gives way to a smaller social area, which then leads to a hidden five-seat nook.

Xaman succeeds and nearly supersedes in its intended vibe as a house of shamanic ritual, a model example of Estudio Atemporal’s design philosophy. Surprising. Distinctive. And ever-changing, just like its plants. For the staff, it’s equally a place to learn about highballs and horticulture—and perhaps the only bar in the world where you can get fired for turning off the lights when you leave. 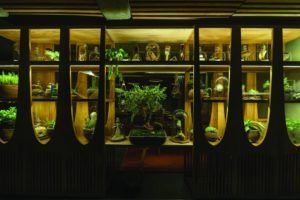 In the Catskills, Minimalist Cabins and a Scandi-Style