The Adult Treehouse That Is Otium

The Broad Museum’s new rustic accent is a Napa-inspired restaurant. 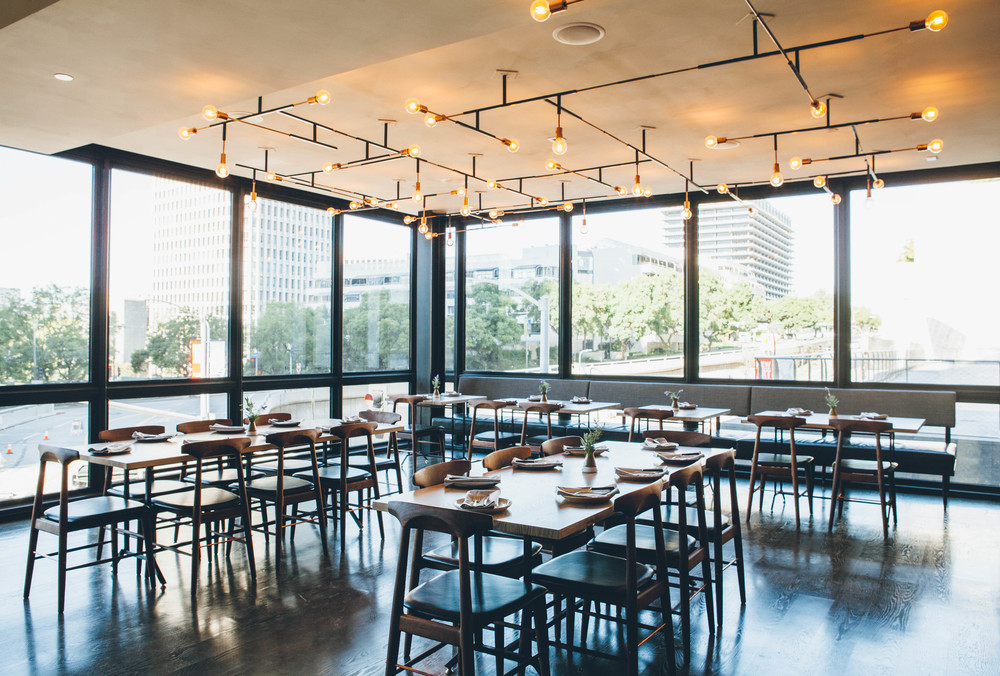 The distance between Napa Valley’s rolling, vine-covered knolls and the Bunker Hill section of downtown Los Angeles is 411 miles. There, standing along Grand Avenue watching people in suits skitter between stark granite high-rises, it feels even farther. It seems like the last place Timothy Hollingsworth, the former chef de cuisine of Napa’s famed French Laundry, would choose to open his first solo project, but a glimpse of Otium serves as an explanation.

The purpose-built, two-story space sits atop a bridge that spans Hope Street, on the grounds of the new Broad museum, at the end of a long pedestrian plaza planted with 100-year-old olive trees transported from North California. Inside, a skin of a chestnut-colored Ipe wood serves as a warm contrast to the sterile concrete and stone surfaces that dominate the neighborhood. “There’s an adult tree-house feel to the project,” says Greg Bleier of Studio Untld, one of two firms responsible for the restaurants interior design, the other being House of Honey.

Otium—“leisure time,” in Latin—as with so much of Bunker Hill’s recent revival, has philanthropists Eli and Edythe Broad to thank. In the 1980s and 90s, the duo was instrumental in raising funds to build the Museum of Contemporary Art and the Frank Gehry—designed Walt Disney Concert Hall, bring a new energy to the stoic financial district; now, they’ve added the Diller Scofidio + Renfro-designed Broad museum as a repository and display space for their art collection. For the museum’s recently opened restaurant, the Broads tapped restaurateur Bill Chait, who brought Hollingsworth on board. Together with a team including Studio Untld, Riley Architects, and Osvaldo Maiozzi, the group has collaborated on a project aimed at endowing his austere section of downtown L.A. with a new sense of warmth and motion.

“There are a lot of restaurants out there, so for me, there had to be a larger mission,” Hollingsworth says. “How do you become more than just a restaurant? It’s important that you look at your environment and how you can fulfill your role, which in this case, is activating a forgotten area.”

The surrounding plaza has already become a magnet for pedestrians: Olice tree stumps avail themselves for relaxing, reading, and lunching. Hexagonal ceramic tile flooring, crafted by Granada Tile, spills from an exterior patio into the building, drawing guests inside. Once there, a massive open kitchen is a focal point of the space, inviting diners to watch Hollingsworth and his team at work. A wide range of seating options—including a lounge area, bar, high top tables, banquettes, and traditional dining tables with chairs—were included as a way of making the restaurant feel flexible and welcoming.

Wood, copper, steel, and glass combine to give the space a bucolic yet raw vibe. “Tim spent the better part of his career up in Napa, so we wanted to bring a little Napa down to Bunker Hill,” Bleier says. In that spirit, a botanical mural by Sagmeister & Walsh with a swirling vine motif occupies the rear wall of the main floor. Upstairs, in the mezzanine, a forest of 24 vertical “garden towers” immerses guests in the restaurants own version of a rooftop farm. Logs used to feed Hollingsworth’s wood-fired rotisseries and oven sit stacked in plain sight. Many of Otium’s decorative elements, including tables, chairs, ceramics, and light fixtures, were designed by local artisans contributing to the “perfectly imperfect” handmade charm of the space.

Similarly, the food that Hollingsworth produces at Otium is designed to be approachable. His menu consists of a simple list of items, without categories or sections, meant to appeal to everyone from the solo museumgoer looking for a snack at the bar to a large groups in for a multi-course dinner. The dishes themselves have a homey, but elevated, feel; they rely heavily on rustic wood-fire cooking, and many have been devised with sharing in mind—a slice of Napa-style conviviality, in the heart of downtown L.A. 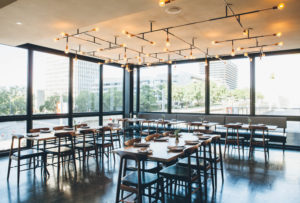