A French collector honors his Italian roots at a discreet art-focused hotel in Puglia.

A French collector honors his Italian roots at a discreet art-focused hotel in Puglia.

Puglia belongs to a global fraternity of cool-kid refuges that stretches from Montauk to Tulum, Byron Bay to José Ignacio, and it’s not hard to see why. The region’s location on the sun-kissed heel of Italy’s boot, where the Adriatic Sea meets the Mediterranean, is one of the country’s last remaining hideaways untouched by invading tourist hordes and luxury fashion boutiques. La Fiermontina, a new urban masseria (farmhouse) on Piazza Scipione in the historic city of Lecce is owner Giacomo Fiermonte’s 10-year labor of love.

A Parisian of Italian extraction, Fiermonte stumbled upon the property in 2000. Something about it seemed so familiar to him. He saw restoring the building as an opportunity to pay homage to his late grandmother and uncle, who were both Puglia natives. He tasked local architect Antonio Annicchiarico, whose past clients include Oscar-winning film director Roberto Benigni and the Hermès family, and French design firm Charles-Phillipe and Christophe, to remake the 17th-century compound into a contemporary art gallery-cum-hotel while still maintaining its Puglian character. “Giacomo invited us to discover Puglia and the city of Lecce,” Charles-Phillipe says. “We were instantly impregnated by the region.”

The result is a country-style estate that wouldn’t feel out of place in the bucolic pastures nearby. It’s a rarity in Lecce, which is often referred to as the “Florence of the South” because of its narrow cobblestoned streets and Baroque architecture. “In those times, the rich families would come to build their mansions. We wanted to respect that tradition, so we interpreted the building as a family’s dwelling rather than a hotel,” Charles-Phillipe says. The spare interiors are fashioned with walls made of the region’s famous creamy limestone pietra Leccese, a common material used in the conical dry-stone huts found in rural areas outside of town, as well as traditional pietra di Trani floors and antiques from Fiermonte’s personal collection. Outside, the grounds are walled in by ancient stone and feel like an open-air museum: gnarled olive trees and a plunge pool punctuate a sculpture garden with an original bronze work by French artist Fernand Léger. The terrace restaurant helmed by a young local chef serves housemade pasta and pasticceria leccese (custard pastries).

Charles-Phillipe and Christophe knew when to enhance and when to leave well enough alone, letting the dramatic star-pinnacled ceilings and original architecture take center stage in the 16 rooms, which are thoughtfully appointed with minimalist Italian furniture, custom textiles, and fireplaces. “The architectural rigor, as opposed to Lecce’s Baroque buildings, gives the place a more contemporary edge,” Charles-Phillipe says. “Our choice fell on curved shapes with timeless colors.” The bathrooms are spacious with high wood-beamed ceilings, organic bath products, and freestanding tubs.

The public spaces are stocked with artworks that Fiermonte has amassed over the years. “We chose to give pride of place to the art exhibits rather than the décor,” says Charles-Phillipe. The lobby has a pair of Le Corbusier LC1 chairs, the French-Swiss architect’s first furniture design from the 1920s—“We chose them because they’re not as well known as his classics”—and an Utrecht armchair by Gerrit Rietveld. Modern Refolo benches, Ombra armchairs, and Mexique tables by Charlotte Perriand create the stylistic form of the library. In the dimly lit Enzo bar that was once a barn, film posters adorn the walls and Tobia Scarpa’s orb-like Suspension Nictea lighting fixtures hang above the gold-paneled bar like, “jewels that follow the roundness of the stone vault,” as Charles-Phillipe puts it. “The family gave us sculptures, drawings and paintings, which we integrated because they represent the soul of the resort.” 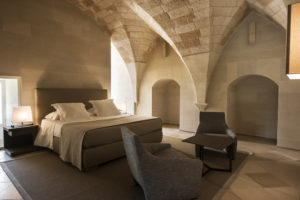 A Tokyo Yakitori Bar Gets a Psychedelic New Look