America's Industrial Past Offers a Vision of Its Post-Mall Future

The American mall, once the mainstay of suburban teenagers and shoppers, is in decline. Experts estimate that approximately one in four of those havens of a bygone retail golden age will close by 2022. But a growing boom may help to offset this economy-wide bust.

Across the nation, a tide of repurposed, multi-use properties are offering consumers dynamic food halls, artisan shopping centers, experiential pop-ups, and more. While they’re unlikely to fully stop the decline of traditional brick-and-mortar retail—or save the mall of your youth—they offer something more: the chance to turn thousands of landmarks and neighborhoods blighted or threatened by market downturns into generators for the new American economy.

Take commercial real-estate operator Jamestown, which, along with its partners, has spearheaded a collection of adaptive-reuse developments, from Ghirardelli Square in San Francisco to New York’s Chelsea Market (later sold to Google), which have transformed underutilized properties into dynamic cultural destinations.

Established in 1983 as an investment and management company focusing on real estate, Jamestown has grown into a national, vertically integrated real estate operator. Under president Michael Phillips, Jamestown is crafting inter-reliant communities where different companies collaborate, ideate, prototype, produce, and market under one roof. “The whole is much more productive than the sum of the parts,” says Phillips, who explains that he tries to gather diverse tenant bases to add value and strengthen the community.

In New York City, where Jamestown has had its greatest success—and where the tension between creating versus destroying artistic communities provides a constant push-and-pull—Industry City has thrived as the area’s largest privately owned industrial complex. A six-million-square- foot collection of warehouse structures situated on Brooklyn’s Sunset Park waterfront, Jamestown, partner Belvedere Capital, and others have created a beehive of shops, showrooms, event spaces, and courtyards catering to a range of industries, from culinary to crafts and childcare, from what was once the skeleton of a little-used shipping yard.

Odile Hainaut of WantedDesign NYC was one of the first to see Industry City’s potential, opening a permanent store in 2013. “It was a blank canvas,” says Hainut. We thought this venue was an amazing opportunity to build some- thing.” To Hainaut, the prospect of luring the design world from Chelsea to Industry City, almost an hour away by subway, was daunting, but on opening night, she attracted over 2,000 guests. “People are ready, they are curious,” she adds.

In addition to bolstering a creative ecosystem, Industry City’s Innovation Lab works with the local community to provide entrepreneurship training and small business resources, offering a wide range of classes, from citizenship workshops to workforce development seminars. According to statistics from Jamestown, on-site employment has grown by an average of 100 jobs per month—from 1,900 jobs in 2013 to more than 7,500 jobs today—and has generated a total of 20,000 jobs city wide.

Andrew Kimball, CEO of Industry City, explains the property’s success as part of a new push toward making the physical operation into a digitally engineered product, from fashion and design to arts and media —in essence, taking retail and coworking spaces into the heavily curated, experientially driven Instagram age. “Jamestown has been visionary at figuring out how to bring older facilities that spoke to a different era of making,” says Kimball, “and had the authenticity of a different era, and filling them with today’s makers and innovators and techies and fashion designers.” 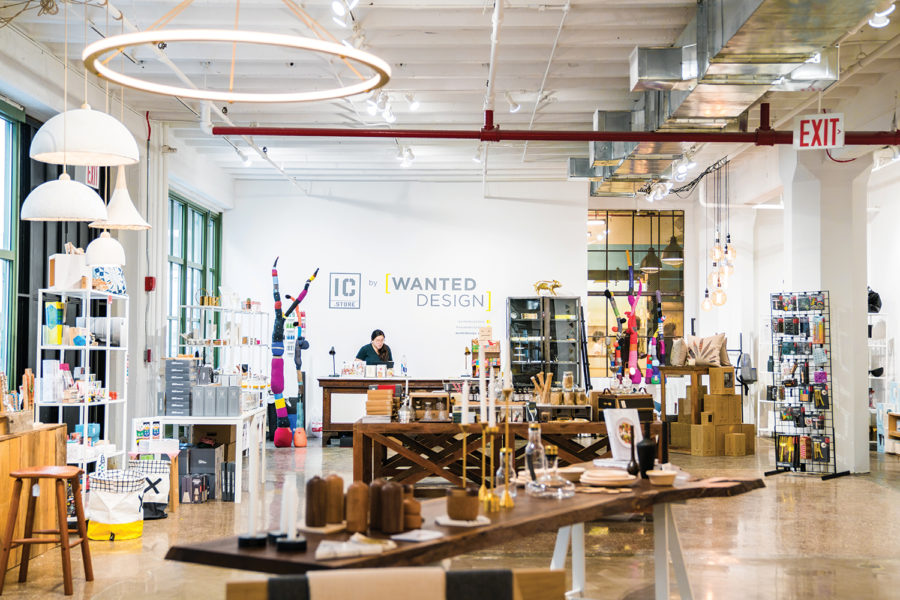 In Atlanta, Jamestown has seen similar success in Ponce City Market. Built on the site of a former Sears, Roebuck, & Co, the Market has revitalized the Old Fourth Ward neighborhood with numerous residential complexes, class-A office space, retail shops, restaurants, and one of the American South’s first food halls. “It’s what the city needed, a place to shop and eat,” says Phillip Sanders, who runs Citizen Supply, the forward-leaning artisan market inside a 12,000-square-foot space inside Ponce. “It helped us get established from an awareness perspective and brought patrons through the door. It created an opportunity [for an indie brand] to be stable as we worked on instabilities in other areas.”

“It’s highly curated,” says Eric Hammond, GM of Higher Standards, a high-end cannabis product boutique, explaining Ponce’s popularity. “The mall setting has run its course—the real opportunity in retail is a highly curated market.” By building a foodie culture and bringing in premium curated stores in an exciting way, Ponce has been able to sustain foot traffic and keep consumers engaged, according to Hammond. “It keeps it interesting. It’s not the standard run-of-the-mill stores. Nothing is there by accident.”

In Boston, the Innovation and Design Building (IDB) offers a similar community but with a distinctly local flavor. Located in the Innovation District in Boston’s Seaport neighborhood, the 1.4-million-square- foot mixed-use complex was originally constructed in 1918, formerly serving as a waterside storehouse for the South Boston Army Base. Just minutes from South Station, IDB is a veritable menagerie of companies and entrepreneurs, including architects, engineers, skilled makers, craftspeople, research and development firms, and technology start-ups, and the Boston Design Center, New England’s premier resource for design professionals. One of its pioneering tenants was Artaic, a start-up that works with designers and architects to create one-of-a-kind mosaics utilizing robots for manufacturing.

While an attractive lease initially lured the team, today it’s the innovation ecosystem where “you can find opportunities to collaborate with other companies and attract high-quality, innovative oriented staff,” says Ted Acworth, Artaic’s founder. A recent IDB collaboration has generated the launch of a new retail concept, an in-store experience to help consumers find the right running shoe, a partnership between EPAM Continuum, a global consulting agency, and Reebok. The launch took place inside Reebok’s flagship store, also located within IDB.

“When the decision was made to move to Boston, we looked at a number of locations, but the IDB was perfect for a company like Reebok,” says Chris Froio, GM of Reebok America. “Prior to the move, we had an incredible campus but were in a very cloistered environment in the suburbs. To reach our potential we felt we had to tear down those walls and be part of an environment that would inspire future innovations.”

“The physical space itself supports our work style—everyone on one floor, the big open space flexible and able to be reconfig- ured to meet project demands,” says Chris Michaud, Head of EPAM Continuum. “We were also able to build out our Made Real Lab right in the middle of our space, which enables us to experientially embody new ideas, serving as a critical catalyst for getting new innovations into the market faster, and most consistently.” Ultimately, says Michaud, “the collaboration and speed that come with being part of a community is really excellent.”

And it is in these mixed-use communities that we see a potential future. If the U.S. is truly moving towards an “idea economy” that prizes creativity, flexibility, agility, and quality, then outdated worker platforms—be they industrial or retail, factories or malls—are inevitably, and perhaps beneficially, doomed. In their decline, they offer a chance for repurposing—and, through companies such as Jamestown, a way forward that will soon mirror this century’s American workforce and economy.

Will Saudi Arabia’s Rebrand Be Successful?

In Madrid, an Offbeat School Uses Architecture to...