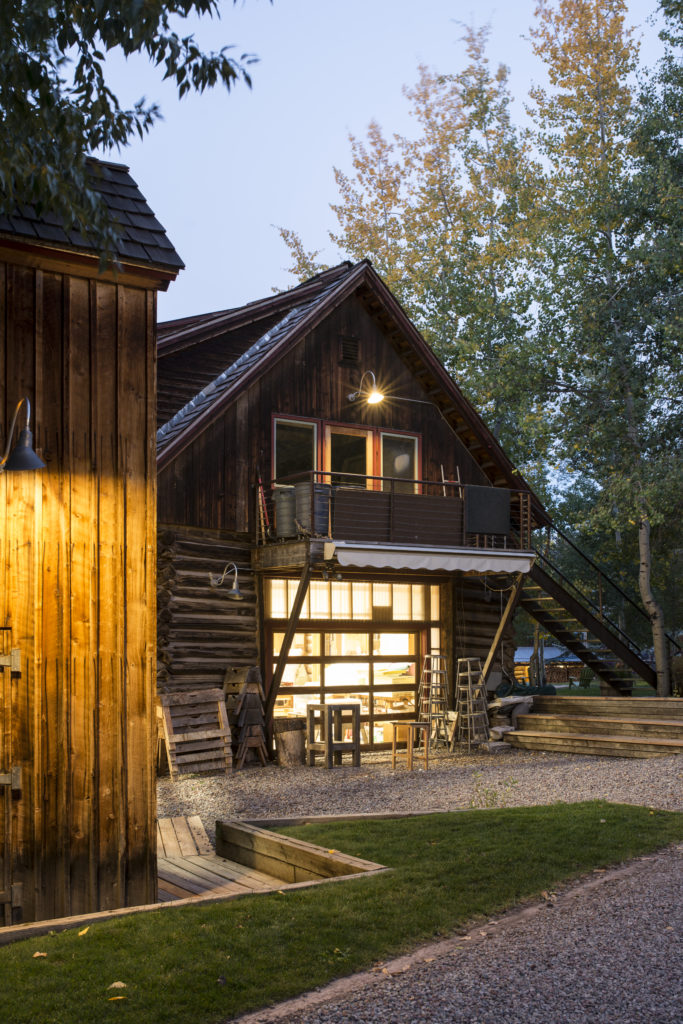 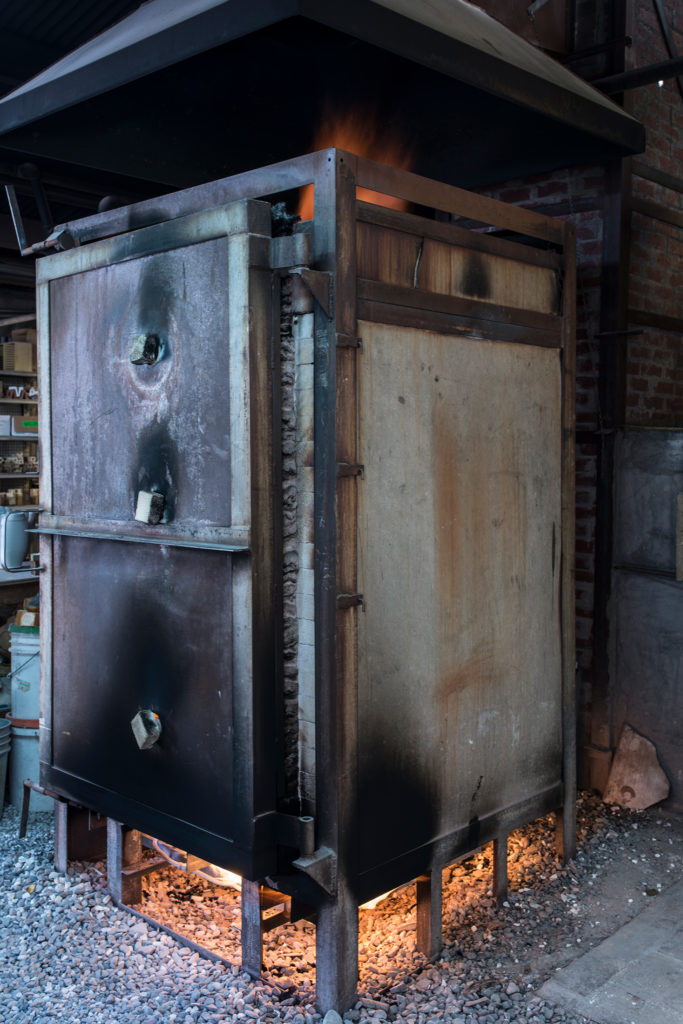 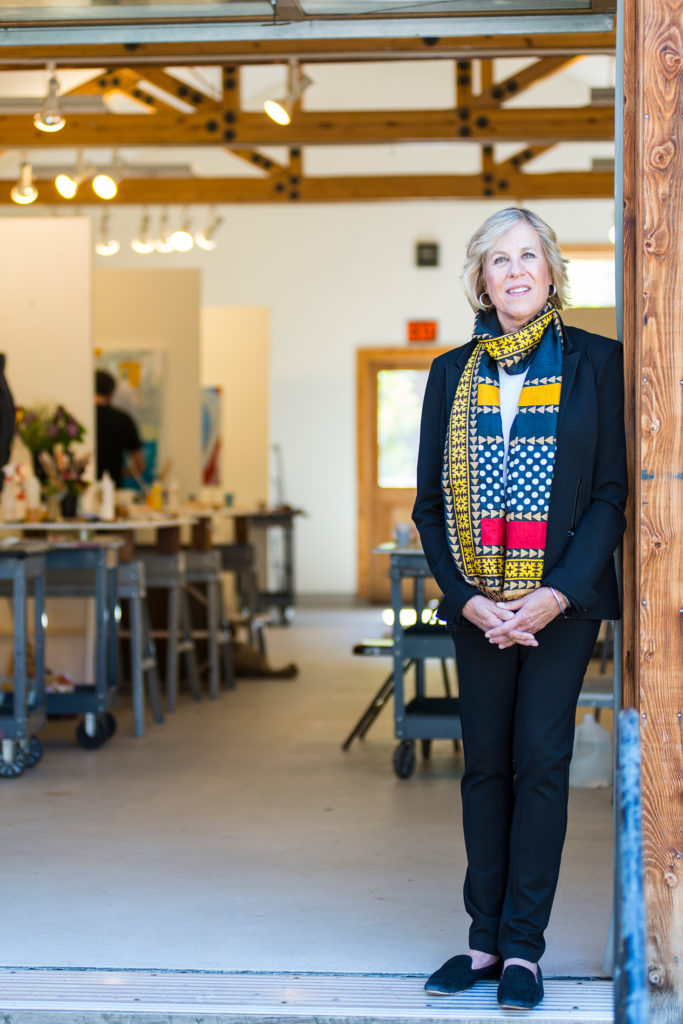 A diverse crowd gathered at the famed art center outside Snowmass Village, Colorado, for a weeklong celebration of its 50th anniversary.

By Sheila Marikar
Photos by Blake Gordon November 16, 2016
Share
Back

A diverse crowd gathered at the famed art center outside Snowmass Village, Colorado, for a weeklong celebration of its 50th anniversary.

The wind in Aspen cuts like a glass shard. During the summer, it slices through thickets of Aspen trees, sending their fat, teardrop-shaped leaves into a flurry of sunlight and shadow. Walking through the log gates of the Anderson Ranch Arts Center in nearby Snowmass Village on a July afternoon, during a celebration of its 50th year, I watch their dance, thinking of “The Park,” Gustav Klimt’s pointillist ode to foliage. Both are bewitching. The arts center, with its wooden cabins and carpeted dormitories, is not.

This is by design. In 1966, Paul Soldner, a ceramicist, was teaching pottery to locals when he lost the lease on his storefront studio. At a cocktail party, he stumbled on the deal of a lifetime—a real estate developer was looking to make the outskirts of Aspen as enticing as the shores of Hawaii. The mysterious businessman had purchased four ranches in the mountains and asked if Soldner and his hippie artist buddies wanted to take one of them and turn it into an arts center that might have the fringe benefit of attracting tourists. “We couldn’t believe our luck,” Soldner told the Smithsonian in 2003, eight years before his death. He chose the Snowmass Ranch, established in the 1880s to help feed Scandinavian miners that had come to Colorado to dig for silver. The log cabins were falling down and there was manure to be shoveled out of the sheep shed, but Soldner and his peers seized the opportunity to create an anti-establishment arts curriculum of the kind that no accredited institution would allow: no grades, no attendance, no degrees.

There were other requirements. Artists had to work for the Ranch four hours a day; tasks ranged from digging ditches to learning how to sell art. They lived communally and took turns preparing dinner. “Sleeping quarters were a sheet down the middle of a bedroom,” Soldner said in that 2003 interview, “and one person slept on one side and one on the other.”

Not everyone dug the vibe. Soldner resigned a few years after founding the arts center. A bureaucracy rained down. Artists paid tuitions for week-long workshops and funds were raised for new buildings and equipment which attracted bigger, more famous artists. Soldner’s name remains on one building on campus, the oldest in Snowmass Village, from 1882. It stores kilns.

The Ranch’s administrators like to talk about the community it cultivates for artists, a lonely and temperamental breed. It’s true: The sculptor Tom Sachs first visited to take a course. Ed Ruscha and the Haas brothers have flocked there as well. Pretty much everyone on campus is an artist. “Yutaka, who works in the kitchen, I tried to steal him to come work in the studio as a ceramicist because he went to Yale and he speaks Japanese and he’s really good,” Sachs tells me one night during an Uber ride from the Ranch to an Aspen dinner party. “He was like, ‘No, I don’t want to move to New York. I want to live here.’”

In the five decades since Soldner’s experiment began, another community has cropped up, as crucial to Anderson as the artists, if at odds with its commune roots: the wealthy benefactors, socialites, and art collectors who frequent boozy parties like the one Sachs was en route to. “Like so many other meccas of awesomeness, Aspen has been corrupted by douchebaggery, and it’s resulted in extreme real estate jacking to the point where the people who work here can’t live here,” Sachs says. “It’s a very fucked-up place because of that. Nevertheless, it still remains fantastic because of this incredible, remote, difficult setting.”

“Aspen is a lot of things,” he adds, “but there are some real eccentrics here, and this place has got a lot of soul.”

On my first night in Aspen, I go to a cocktail party. Gravel crunches under my feet as I walk up a long driveway from the line of uniformed valets to the home of socialite Sue Hostetler, who is also the editor-in-chief of Art Basel magazine.

She’s wearing a red dress with a tight T-shirt bodice and a full-length skirt that looks both effortless and hopelessly elegant. Hostetler took classes at Anderson in her twenties and now sits on its board. She organized the party to celebrate the arrival of Jerry Saltz, New York magazine’s irreverent art critic, who would give a talk at the Ranch’s meeting hall the next day.

“He’s brilliant,” Hostetler says, “so clever, and oh, here he comes.” Saltz shuffles in, rumpled and uncle-ish, next to the coiffed women swooning in his wake. “Speak of the devil! We were just taking your name in vain.”

“Thanks for having me.” Saltz says, looking around. “Wow, what a place this is.” He appears to be on his best behavior.

Hostetler’s home is a veritable museum, with works by Tracey Emin and Vuk Vidor displayed where others might mount college diplomas and family portraits. She keeps good company in Aspen, like Eleanore and Domenico De Sole (the latter is the chairman of Tom Ford and Sotheby’s), whose sprawling second home in Snowmass is hung with Lucio Fontana’s savagely beautiful slashed canvases. Four years ago, the contemporary art collector Mera Rubell, who helped start Art Basel Miami Beach, enrolled in a sculpture workshop at the Ranch—this summer, she spent a week printing silkscreens and learning how to take better photos with her iPhone.

“Most people have never really engaged with art making,” Rubell says. “The more you know about something, the more you appreciate it. I didn’t realize how strong your shoulders have to be for silkscreen. I mean, I exercise every day, but it was really …”

She trails off as a champagne flute dings. It’s time for Saltz to say something profound. “We are making it out of ourselves,” he says of the art community in Aspen, congratulating the assemblage for coming together. He strings some other niceties together and throws a random jab: “We let the damn architects get in front of the art, and they build nice, shiny angular things, like a pharmaceutical company”—before excusing himself to adjust to the altitude. (“I got really high a minute ago by accidentally drinking four iced teas,” he had told me earlier by a large bucket of rosé. “I’m a mess.”) As dusk sets in, people scatter: In this verdant valley, summer is party season, and there’s always a glass of something being poured somewhere. Jennifer Stockman, Aspen regular and president of the Guggenheim Foundation, asks a lucky guest whose SUV was brought to the foot of Hostetler’s home for a ride down to the valet. Stockman wore stiletto booties; the gravel was an issue.

Students in Norwood Viviano’s aluminum-casting workshop prepare to pour liquid metal into molds. They’re covered in sand and clad largely in denim. Rachel Wright, a university art instructor who drove here from her home in Mobile, Alabama, asks Viviano how long they’d be allowed to work tonight. “They usually kick us out at 10 p.m.,” Wright tells me. “You need the downtime.” The machine melting the metal, a 40-pound cauldron known ominously as the “crucible,” drones like a jet engine. Wright and another student volunteer to hoist and pour the crucible, donning mesh face masks and protective jackets. Silver slides out like water. Viviano christens the pour perfect. Wright pulls the shield off her face, lifts her fist in the air, and yells, “Alright!” Her classmates clap and holler.

The smell of metal lingers by the ceramics studio, where students are unloading a kiln. They pass small objects down the line like baby birds, cupping them in both hands. (“Oh, is this your pot?” one murmurs to another.) Summer camp camaraderie spills out of the open studios and across the lawns. It even reaches the backyard of the cabin where the Ranch’s executive director, Nancy Wilhelms, sometimes resides, and where, an hour before Saltz’s talk, there is another fizzy fête thrown in his honor. This one is for annual supporters of the Ranch, mainly women in sundresses who compliment each others’ designer sandals. They eat chips adorned with diminutive dots of guacamole and mini meatballs. Some have just come from yoga. At least two are named Bunny. “Eat free food,” Saltz says. “It’s what the art world is about!” He asks if they know who Bernini was. I wonder if the artists pouring metal and unloading kilns know what’s going on 50 feet away. “There are so many different elements,” Sam Harvey, Tom Sachs’s ceramics teacher, says. He came to Anderson Ranch as an undergraduate and ended up working here for nine years. He knows the Ranch depends on the kindness of wealthy benefactors, but not all of his peers are as in the loop. “Some people in the studio don’t know how the sausage gets made,” he says. “They don’t want to know.”

His line lingered in my mind as I watch Saltz speak. While key donors, like Rubell, have prime seats up front, some students are relegated to an overflow area with a live feed. Saltz tells artists to get over themselves and accept that they’ll always be poor. Then he brings up Jeff Koons. “I embrace paradox,” he says. “When two things are true at the same time.”

The following evening, it’s Sachs’s turn to speak. He’s part of a group of a dozen artists who have read the same set of books on art theory, and the plan is for them to discuss their opinions on these texts as if they were in a college seminar. About three dozen people turn up to watch. Prior to the talk, Sachs and his cronies eat polenta and pork at the cafeteria’s outdoor picnic tables. Next to them is a smaller table with a large ice bucket and many bottles of wine. There’s a sign: “Reserved wine, do not take.”

Later, in the Uber—it was difficult to talk at the Ranch, where Sachs kept getting approached by fans like a celebrity—I ask him how he reconciles the glitz of the Aspen art scene with the no-frills ethos of the Ranch. “I don’t think there’s anything to reconcile except for my checkbook,” he says. He comments on his sneakers, dirty from an afternoon hike, and says he is “dressed totally inappropriately” for the party he’s going to. It’s about a half hour from the Ranch, up several winding roads. All I can make out, once he leaves the SUV, is a palatial white mansion illuminated by purple lights.

I had been wondering if it’s fair for an arts center that serves meals on red plastic trays to be the subject of cocktail parties where canapés are passed on silver ones. Truthfully, I’m still wondering. But Anderson Ranch was born of a contradiction: a hippie artist commune that came together thanks to a well-heeled real estate developer. Dichotomous communities stood to gain from the Ranch then, as they do now. Once in a while, they mash up against each other.  It’s how the sausage gets made.