A selection of original artworks by Billy Martin, the drummer of jazz-funk band Medeski Martin & Wood.

As told to Spencer Bailey
Video by Sophia Lou January 12, 2017
Share
Back

Formed in 1991, the band Medeski Martin & Wood (MMW) has long been known for its hyper-exploratory approach to music, melding together a range of sounds, from funk to free jazz to hip-hop, that The New York Times described as a “peripatetic groove machine.” Over this 25-year stretch, the group’s drummer, Billy Martin, has also built an impressive portfolio of experimental artworks. His pieces have been shown widely, including at Colombia’s International Biennial of Contemporary Art Foundation of Cartagena de Indias in 2014, and the following year at the Drawing Center in New York.

“Billy is a true polymath,” says Brett Littman, executive director of the Drawing Center. “He is first and foremost a master percussionist—but his artistic ideas are not only limited to the musical sphere. He draws, paints, and makes films. All of these activities are spurred by his relentless intellectual curiosity and his search for ways to express himself.”

Surface recently met with Martin, 53, in Englewood, New Jersey, at his drum studio and the adjacent teahouse he owns—both of which he designed and built—to discuss the many connections between drumming and drawing, and how dealing with the monotony of long tours on the road has helped him thrive as an artist. Below is a selection of his artwork from the past decade.

I’ve been drawing since I can remember. In grammar school, I bought a set of Rapidograph colored pencils and started to play around with color and shade. I was drawn to it. (No pun intended.) I just had to experiment.

I decided to become a drummer in high school. I had started taking lessons when I was 11. My junior year of high school, it just felt like the possibilities to be really creative—to play classical, jazz, rock, and contemporary avant-garde percussion—were coming at me. I fell in love with it.

It all came together when I met other musicians who were also drawing—particularly Bob Moses and John Lurie. Bob, a drummer and composer, was a mentor of mine. He did all of his album covers and had his own style. John Lurie is like a cult celebrity. He was in Jim Jarmusch’s films Down by Law and Stranger Than Paradise. They both had an impact.

Outsider art and Brazilian, Oceanic, and West African art—all those things were also a big influence, just as I was coming into my own as a drummer. It all rubbed off. That and hip-hop and graffiti, which were everywhere in New York when I was 12. (I grew up there.)

I’ve always been fascinated by line art. Graphic notation is something I’ve struggled with, because I’m not a great note reader. I like to really fuck notation up in my art. I don’t care what a quarter note with a dot next to it means. All that code is great. It works for certain music, but it doesn’t ultimately work for everything, so I like to turn it upside down, inside out, mess it up, and make it more abstract.

The first album art I created was for Notes From the Underground, MMW’s first record, which was a self-produced and self-funded demo. We didn’t have a record deal then. At the time, I was playing around with oil pastels I picked up in Japan on tour, and part of that influence was John Lurie using Caran d’Ache crayons. I started experimenting with those and watercolors.

The MMW logo came later. For the next record, It’s a Jungle in Here, we used a photograph of us under the Brooklyn Bridge that my dad took. Around then I was starting to draw line art. We all decided we needed an image that could represent the band, so I drew this little eye on a pedestal and punctuated it. The logo’s basically a language, visual and abstract. Our third record, Friday Afternoon in the Universe, had the logo on the cover. We started to make T-shirts using it. 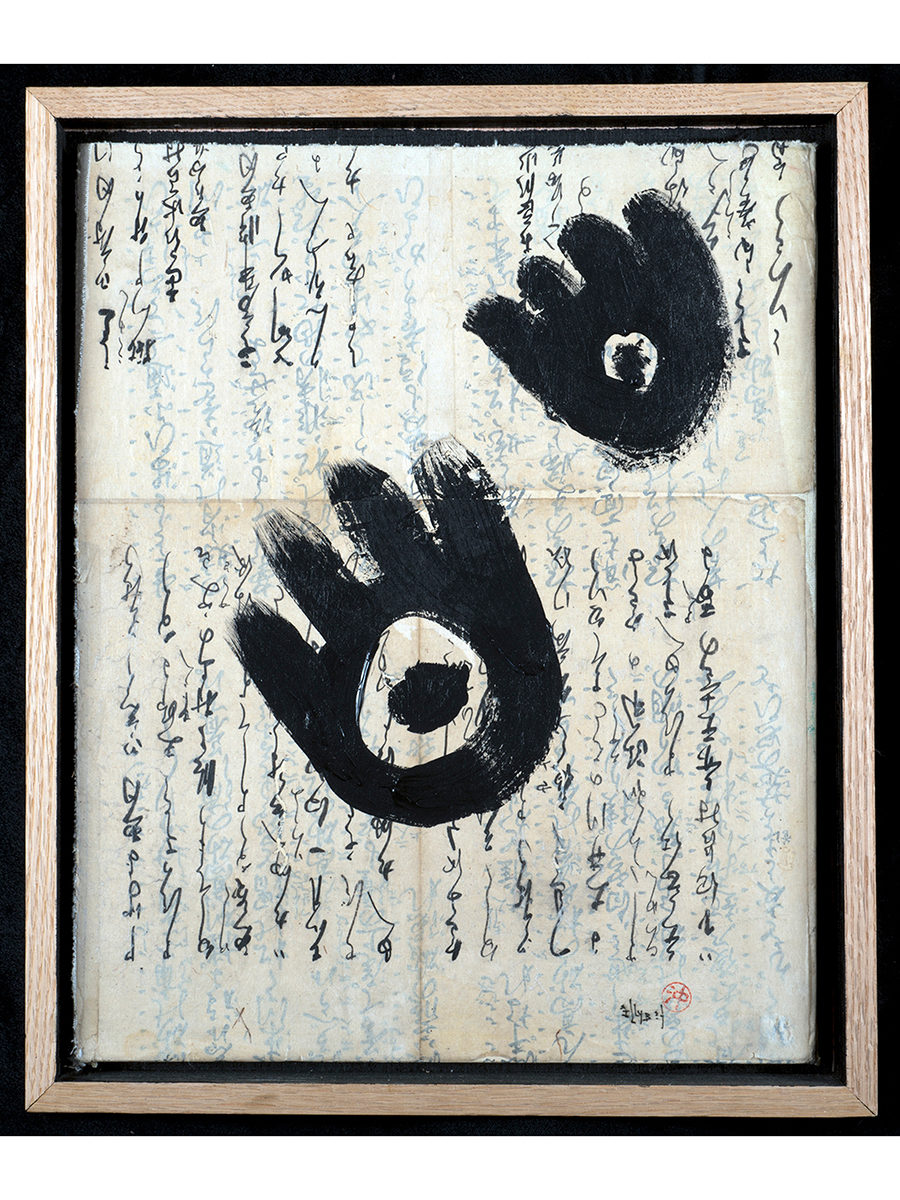 With our fourth album, Shack-man, I was using wax crayons and oil pastels and drawing under candlelight. The Shack-man cover never would have been so fluorescent-looking if I had had better light. I liked the relationship of the colors and the form. It brought a lot of mystery.

Around this time I remember creating portraits on hotel stationery of people I met. Once, when we were on the road in Flint, Michigan, the promoter looked like this teenage dropout stoner dude. He carried around this thing that was like a bong that he made out of a bottle. He was missing a tooth, and he was hobbling around on one leg, because he had broken his leg. The fire department had just closed his club down, so we ended up playing in the alleyway in the back of a building, where everybody was up in the fire
escapes, watching. It was like being beneath the Thunderdome. It was an amazing thing. I ended up doing a portrait of him as well as one of a bus driver who was obsessively cleaning up after us with a Windex bottle.

I was also constantly working on graphic line drawings. I started creating these Xs and dots—you know, notation for rhythm. I ended up creating this system that worked for the band, as well as for teaching and writing a book about mostly West and Central African rhythms.

When MMW gets together and decides we’re going to make a record, it’s never a repeat of anything we’ve done. That’s how I feel about the new direction I’m taking my art in. For a long time, I’ve painted these birds. They ended up in some MMW work. They became very popular. There reached a certain point, though, at which I felt like I wasn’t growing. Then I got into graphic notation.

Looking back, I think I actually drew more because of all the touring. I needed an outlet. This is really important universally: A lot of great art comes from oppressive situations, where people feel trapped in some kind of horrible or unpleasant reality. They’re just locked in a situation they want to transcend. I wasn’t trapped in a horrible situation, but touring in a band was a job, like anything else. You’re living with each other as roommates, and you’re on the road for months at a time in a camper. We had to sleep on people’s couches, in their basements, in their attics. We were driving between three and eight hours a day, on average.

For me, music and drawing are chance operations. Both should come from this place of being in the moment and improvising. In drawing, I follow one line, and it leads to another, just like a rhythm line or a melody. It’s just about letting it happen.