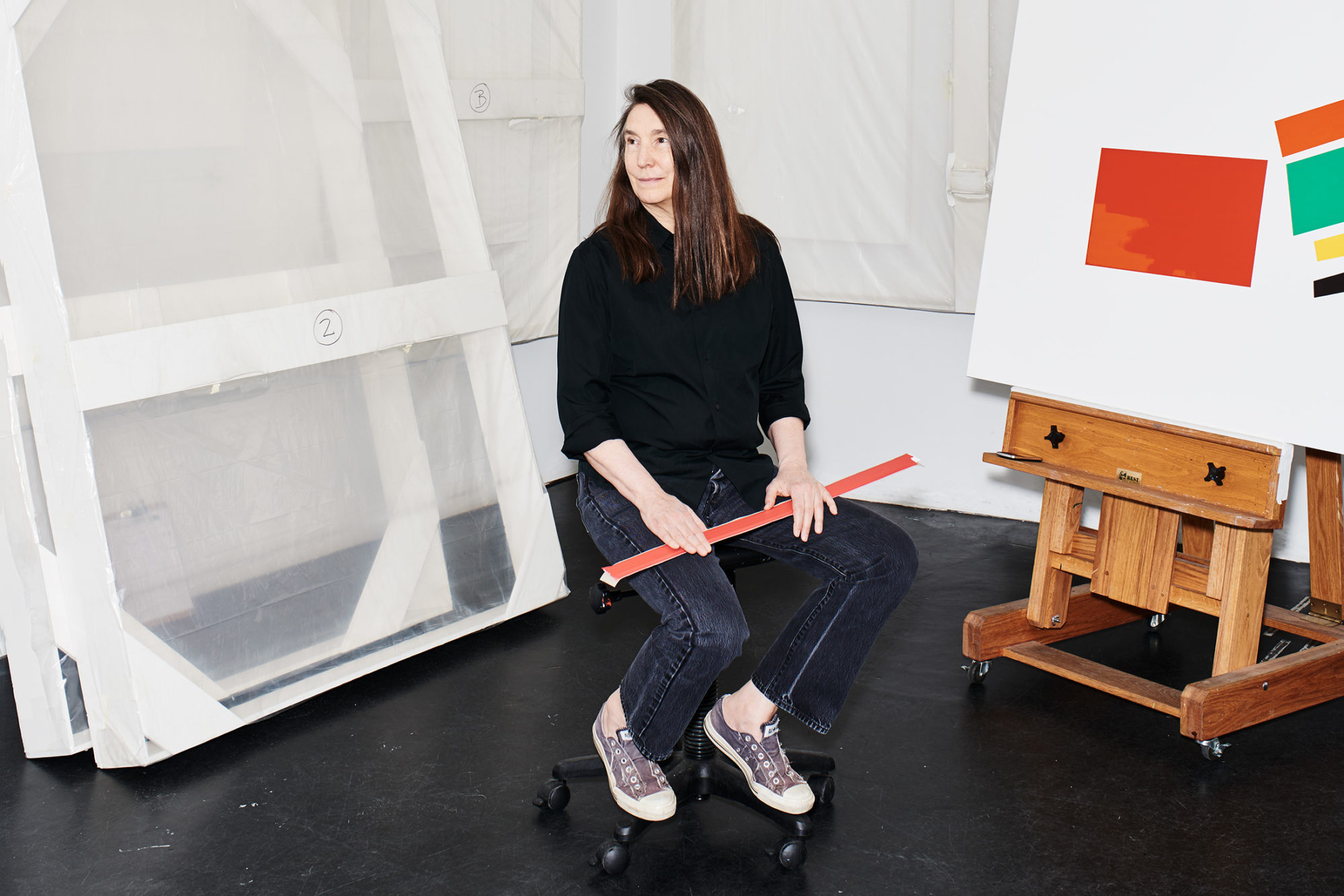 Jenny Holzer remembers the AIDS crisis in New York all too well.

The quickening drumbeat of deaths in the 1980s and ’90s, the fear and homophobia generated by the epidemic, the grieving of New York’s arts communities—for the 66-year-old artist, it’s impossible to forget. “It came out of the blue,” she says on a recent afternoon in Brooklyn, at one of her studios. “What a change in how you went about your daily life, and how, when you were twenty- or thirty-something, you started thinking about death.”

Holzer wasn’t just thinking about close friends who were dying. She contemplated whether she herself had been exposed to the virus. “I was pregnant,” she says, “wondering if maybe, just maybe.”

The artist dredged up some of those memories this year while working on an installation for the New York City AIDS Memorial, due to open this month prior to a public dedication on Dec. 1, World AIDS Day. The monument, a sharply angled pavilion in Greenwich Village designed by the architecture firm Studio AI, sits in the shadow of a sleek white cruise liner of a building that once housed part of St. Vincent’s community hospital—often called the “ground zero” of the city’s epidemic. The neighborhood today is a far cry from the downtown Manhattan of the ’80s. Luxury condos and a high-cost freestanding emergency room occupy the hospital site, opposite trendy restaurants and an upmarket soap shop.

For her installation, Holzer had the bulk of a long poem engraved on the memorial’s granite pavers. Words have long been the artist’s medium: She made a name for herself putting written statements on different backdrops, first as “Inflammatory Essays” on posters put up around the city beginning in the late 1970s, and then as aphoristic “Truisms” on metal plaques, electronic signs, stone benches, condom packets, and other objects throughout the ’80s. She reached a mass audience in 1982 when she displayed what would become some of her best-known “Truisms” on an LED billboard in Times Square, telling passersby that “Abuse of power comes as no surprise” and “Private property created crime.”

1982 was also the year when AIDS got its name, and when the first major news stories on it began stoking public fears. For all the worry and grief Holzer felt during the crisis, her choice of poem for the memorial, Walt Whitman’s “Song of Myself,” is decidedly positive. First published in 1855, the soaring 13,000-word ode to the vast power and potential of the individual seems, at first glance, a quaintly anachronistic choice to commemorate the traumatic legacy of something that wasn’t even publicly identified until less than 40 years ago.

A careful reading of “Song of Myself,” though, dispels any doubts about its aptness. Holzer’s selection, nearly 9,000 words long, includes most of the work’s best-known passages. Whitman’s lengthy, free-flowing lines were an innovation in his day, and they are extended even further in the installation, liberated from the limits of the page into a single, continuous spiral. The poem is about the body (“Mine is no callous shell,” Whitman writes), the pull of sex (“Always the procreant urge of the world”), and the worldview that it isn’t mortality that defines and unites us, but life (“the common air that bathes the globe”). It’s a strong counterpoint to the destruction and divisiveness that AIDS wrought on New York.

“Jenny’s design is a tribute of timeless elegance,” says Keith Fox, the chairman of the AIDS Memorial board and CEO of the book publisher Phaidon. Her selections from the poem, he adds, invite viewers “to reflect on love, loss, renewal, hope, and desire.” Fox, who has been an admirer of her work since the late ’80s, calls the site “meditative and challenging,” a description that also sums up the difficult experience of recalling and reliving trauma in order to move past it.

A memorial, though, can also call upon viewers to celebrate life, not just mourn the loss of it. And Whitman, Holzer says, “was unusually happy about his flesh, and rolling around in the dirt, and looking at beautiful bodies, and even—especially—saying, ‘Death isn’t what you thought it was!’”

Public shaming has been an especially poisonous response to the rising toll of AIDS, Holzer says, so Whitman’s unabashed exuberance seemed to her like the perfect antidote. “I thought his anti-shame was just the trick.”

At her studio, Holzer is dressed in a black button-down with loose jeans and Converse sneakers. Her dark brown hair falls long and straight around her face. Behind her are prints of her recent paintings of government documents on war and torture in the Middle East, and on the table in front of her are a highlighted essay about AIDS by the late artist David Wojnarowicz and anti-establishment poems by the Iranian writer Omid Shams Gakieh.

She stopped using her own writings more than a decade ago, “wandering around in various thickets” instead, she says, to find others’ words to use for her work. Earlier this year she created a series of text graphics for Vogue’s website and Instagram feed, animating brief quotations from stories by survivors of gun violence. The animations are oddly beautiful—with flaring and sparkling backgrounds that recall chemical reactions—though their content, of course, can be bleak. “A stray bullet flew through the window and into the back of his head,” one reads.

Quotations also made up part of her “Laments” exhibition at the Dia Art Foundation in 1989, during the height of the AIDS crisis. Thirteen phrases were displayed on vertical LED tickers and also engraved on marble-topped sarcophagi; several statements were anonymous comments about AIDS. “I learned that time does not heal,” said one. “I want to go to the future, please.”

Troubling or thorny political issues are artistic catalysts for Holzer, who prefers grappling with them in what she calls “encounters with self at 3 a.m.” “I wake up five times in the course of the night and think about dire stuff, and watch Law & Order reruns,” she deadpans. “That’s an important part of my nightly routine.”

There’s also plenty of laughter amid the musings on doom and gloom. Holzer jokes about her aversion to social media (although @jennyholzercat and @jennyholzermom, Twitter accounts that appropriate her “Truisms,” are pretty funny, she says), and about the technical problems that have delayed the launch of an augmented-reality app that will complement the AIDS Memorial project. “I know we can make it work,” she says of the app, which will use phone cameras to overlay text and visual content on sites around the city and worldwide, “because Pokémon came out with my freaking idea.”

Holzer says she has always been excited by new technology, and maintains a strong enthusiasm for the arcane. She began making her government-document paintings while combing the web-based National Security Archive shortly after the Iraq war. Sifting through thousands of pages of intelligence records answered some of the burning questions she had about the foreign affairs of the United States, and she felt compelled to share her findings.

The early paintings in her document series were reproductions of information-heavy pages—a map of Iraq, for example, annotated with invasion orders like “Seize N. Oil,” “Exploit,” and “Shock and Awe.” Holzer presented them simply as facts unmasked, using painting as an act of revelation.

But later she began painting documents that were so heavily blacked out by censors that almost nothing was readable. “I thought perhaps it’s just as important to show what you’ll never know, or you won’t know until much later,” she says.

These works are often done in bold primary colors, and from a distance they resemble color-theory studies, like Josef Albers’s “Homage to the Square” series, or works by the suprematist painter Kazimir Malevich. But up close, bits of text—things like “Secret/No Forn” or “Shifting to Softer Targets”—become visible, and hint at something more ominous. The viewer realizes that the large blocks of color on the paintings are redactions, that the cheery yellows or reds that draw the eye are in fact obfuscations of what could be grim details. The works pair a history of a protracted conflict with a history of modern painting, alluding to artistic traditions while offering bracing protests and calls for political transparency.

In some ways, Holzer says, the paintings are like her early “Inflammatory Essays.” “I would put my little square posters in the middle of big ads,” she says, effectively redacting marketing content as if it were detailing drone strikes. “The colors sometimes will make people walk up; other times the color is some kind of relief, you know, a little mercy on these otherwise unimaginable things.”

This contrast between medium and message is a hallmark of Holzer’s work. It shows how good art can bring contradictory ideas or feelings into harmony, how a memorial, say, can enshrine the horrors of the past while looking forward to a brighter future.

“Grief is part of it, and so is frolicking in ecstasy,” Holzer says. “Why choose?”

Reflecting on AIDS in New York City: Jenny Holzer in Collaboration with Surface