In a strong vote of confidence for the Jersey Shore, The Asbury opens in a city ripe for transformation.

In a strong vote of confidence for the Jersey Shore, The Asbury opens in a city ripe for transformation.

Since leaving her position as Ian Schrager’s head of design—a gig she held for almost 30 years—Anda Andrei has made it clear she’s not slowing down. For her first solo project, she unveiled The Asbury, a 110-room hotel in a city not on the radar of most design junkies: Asbury Park, New Jersey.

In the 1960s, the buzzing boardwalk town was known for its rock-and-roll, jazz, and doo-wop music scene. (In 1973, an incipient musician named Bruce Springsteen broke into the American consciousness with his album Greetings from Asbury Park, N.J.) Through years of race riots and unrest, the town fell into disrepair and its economy stagnated. The beach community’s rebirth has undergone numerous false starts as central buildings still sat shuttered through the 2000s.

Housed in a former Salvation Army shelter, The Asbury may be an indicator that the town is finally ready for a new act—it’s the first hotel to open there in more than half a century. “You have strong history, architecture, and music, so there’s something to play on,” Andrei says. To tap into that tradition and bring it to life, she teamed with David Bowd, owner of Salt Hotels, whose stylish transformation of a bed-and-breakfast in Provincetown, Massachusetts, caught her attention. (Bowd, too, previously worked with Schrager.)

The result embodies what Bowd describes as an “anything goes” mindset. Echoing the unfussy Jersey Shore locale, Andrei created a low-key summer camp, a departure from the high-wattage spaces that were her calling card during the Schrager years. The main entrance opens up to a greenhouse-like rec room, with stacks of rock ‘n’ roll history books and biographies on custom low-set sofas; across the way, bleachers overlook a pool table. The reception doubles as a grab-and-go counter that stocks snacks, coffee, and cold-pressed juices. Records and cassettes line a wall at The Soundbooth, an electrified sea foam-green bar that hosts live music acts and open-mic nights.

Still, it’s the public areas that stand out here. During the warmer months, a converted Volkswagen camper van serves local craft brews on tap in the outdoor beer garden, where a lattice of string lights hangs over picnic tables filled with the post-beach crowd noshing on waffle fries from the on-site food truck. The adjacent pool is tucked away inside a living wall, with a small wet bar, fire pits, and hammock-strung cabanas. A programming schedule is posted on a lobby board daily and includes morning yoga at The Baronet, an artificial-turf rooftop yard with panoramic views of the shoreline. At night, it turns into an outdoor movie theater, projecting cult classics on a 20-foot wall, which sits beneath the original marquee from the once-rousing, now-extinct Baronet Theater. The lantern-lit, tequila-forward bar on the upper roof terrace is where to find a livelier nightlife energy. The focus on creating varied social spaces is no accident. “Who comes here to sit in their room?” Andrei says. 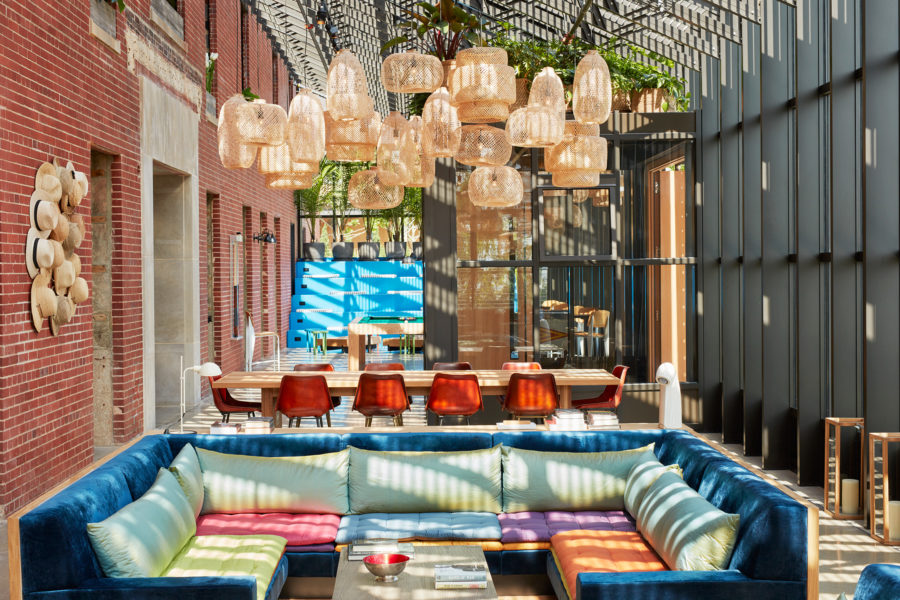 The laid-back vibe reflects the new Asbury Park, one that is no longer trying to recapture its rollicking past but embracing a future that looks like an alternative to more gussied-up weekend destinations. “The worst thing you could ever do is put a big branded box hotel here,” Bowd says. “It needs to feel like it has its own sense of spirit, its own sense of place.” The changing nature of the neighborhood over the past few years is one of the reasons Bowd and Andrei decided not to do a full-service restaurant; they didn’t want to detract from the burgeoning food scene. A short walk away, downtown has seen a new energy take hold thanks to creative openings pushing Korean tacos or hybrid tapas, and cafes that highlight small-batch roasters. “It was a hard decision to make, from both a revenue and guest experience point of view,” Bowd says. “But if we’re going to make a difference here, we have to support the community.”

Visiting on a beaming 80-degree day in June, I’d have never guessed Andrei was first sold on the project after touring the site in the dead of winter. Yet she and Bowd believe The Asbury can transcend season and support the town year-round. It’s also the first stage of forthcoming developments that New York-based developer iStar has planned for all 35 acres of the city’s beachfront, including a mixed-use building Andrei is designing in collaboration with architect Gary Handel, which will consist of retail stores, condos, and a 54-room boutique hotel.

One evening during the soft opening last summer, Andrei was staying late to see through some lighting tests. She walked through the main entrance and saw a family relaxing on the lounges as one of their kids played guitar in the lobby; another group of 20-somethings sat clustered on the bleachers, sipping cocktails from the bar; the lights danced like fireflies above guests shooting pool and playing pinball. It was almost surreal to see reality aligning with her vision so perfectly, she says. “This is exactly what I dreamed it was going to be.”