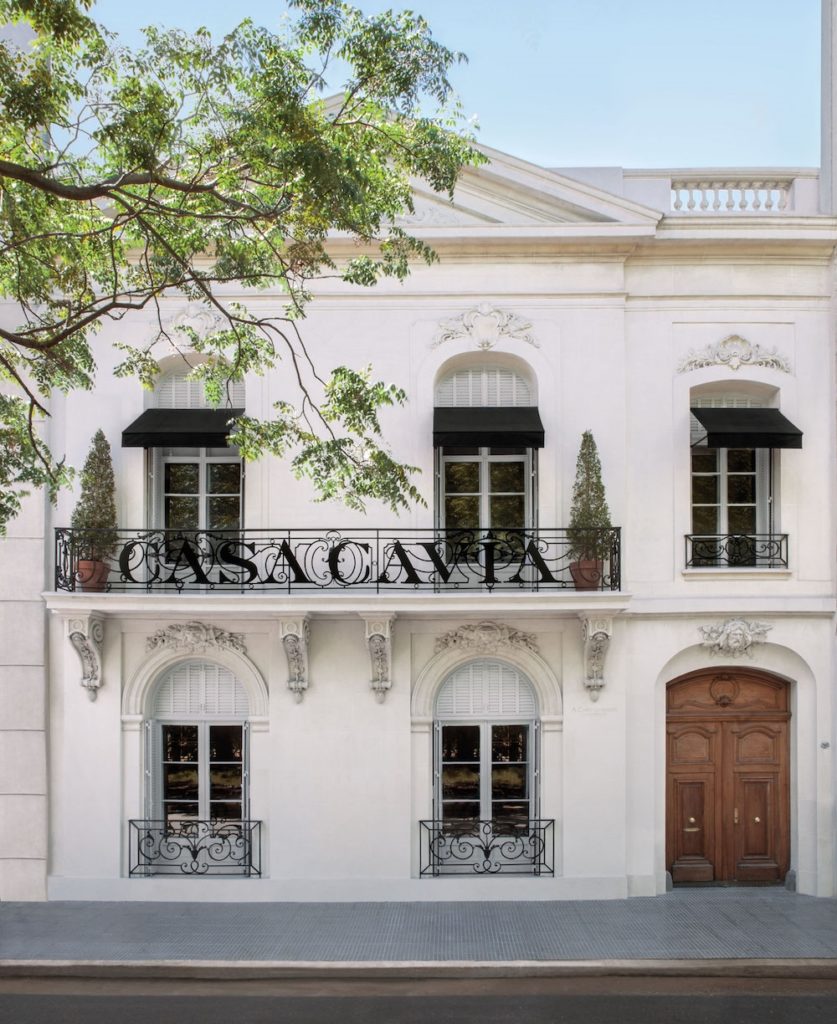 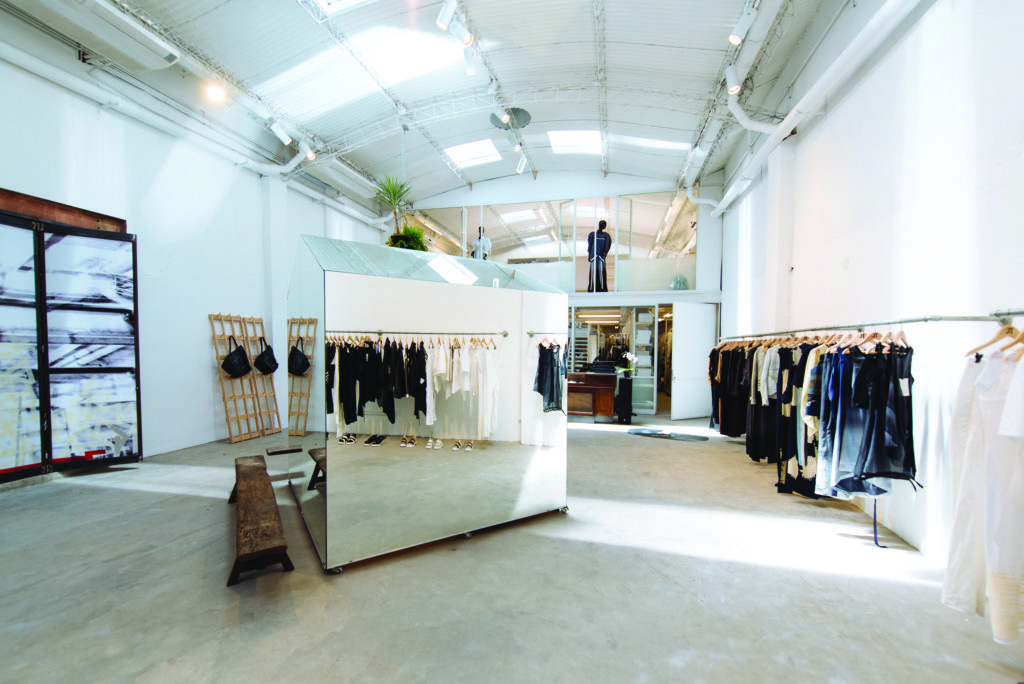 The showroom at Jessica Trasman. … 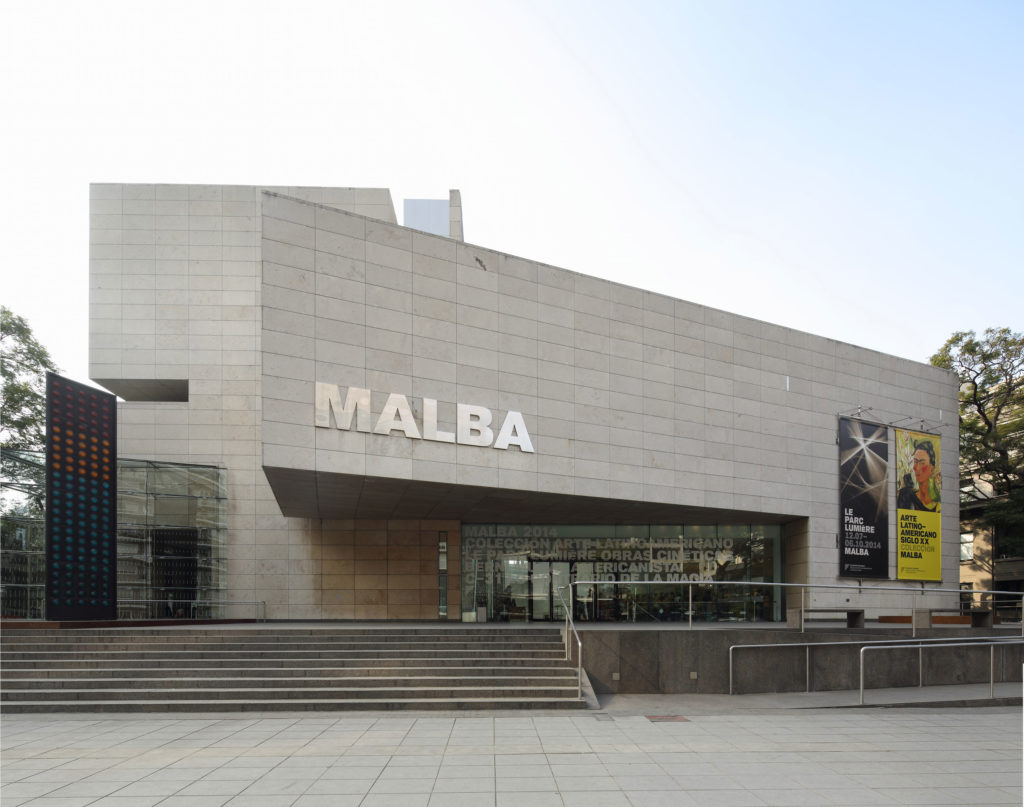 The exterior of MALBA. … 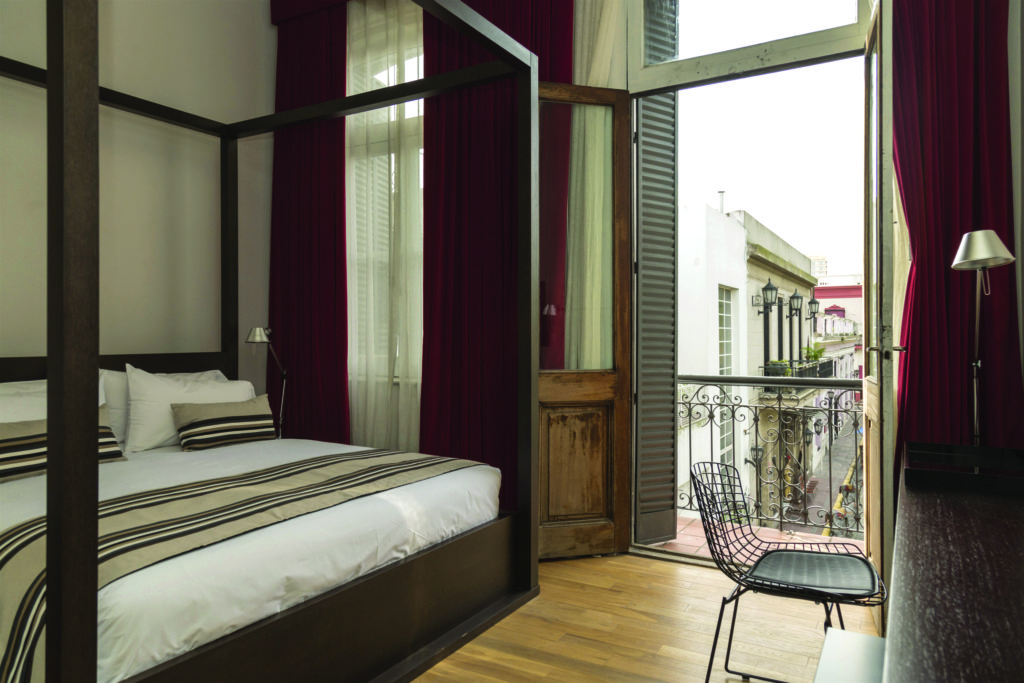 A room at the Anselmo hotel. … 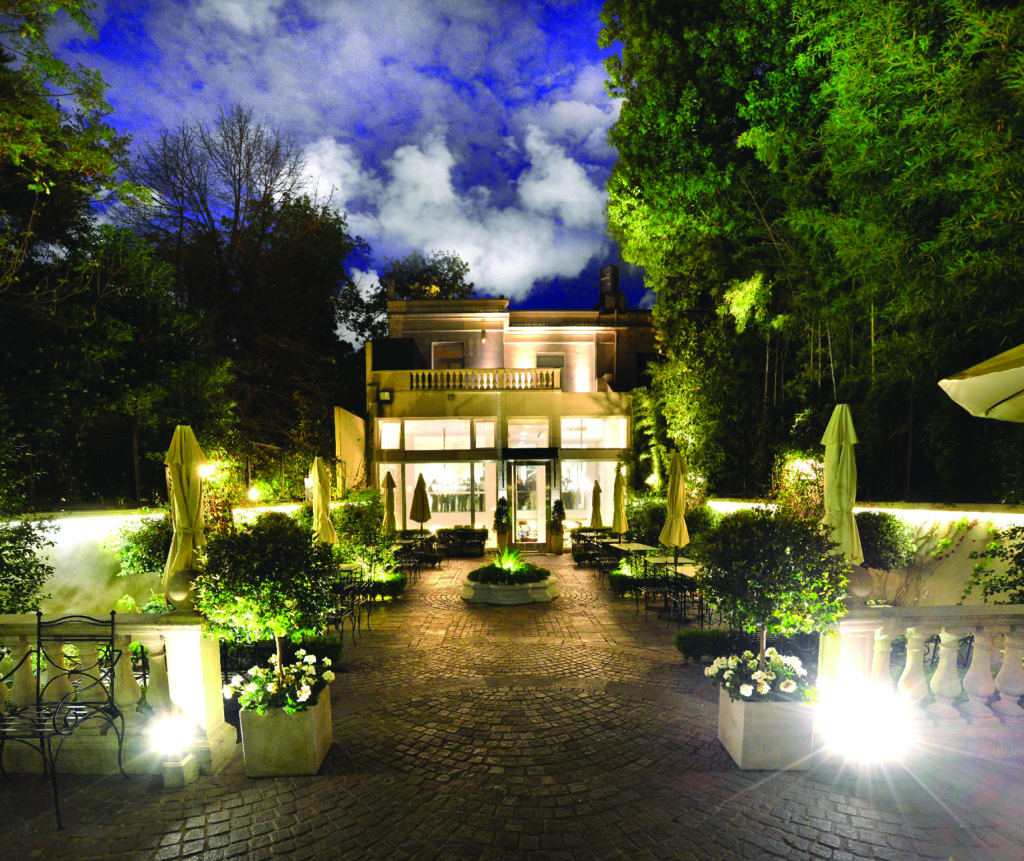 A cafe at the Plaza Castelli park. …
Destination

Buenos Aires is often compared to Paris or Madrid, which makes sense, but it also downplays the distinct personality of this South American capital.

Buenos Aires is often compared to Paris or Madrid, which makes sense, but it also downplays the distinct personality of this South American capital.

Buenos Aires is inhabited by some of the most attractive and complex people on earth: Porteños, whose supersized egos can easily crumble under anxiety, and whose sense of style is hard to match. Then there’s tango, Borges, and the ubiquitous parrillas, doling out superlative steaks. And while the European influences are obvious—seen in Art Nouveau mansions, ample boulevards, and street-side cafés—the city displays its very own amalgam of global trends in architecture, fashion, and beyond.

Alicia de Luca
Housed in a concrete-and-glass building with cubic shapes reminiscent of Bauhaus, this modernist bistro, designed by local architecture firm MMCV, is quite an oddity in the traditional barrio of Villa Devoto. In the main 100-square-foot dining room, Nidolab studio used flaxen Petribi wood for the floors, shelves, and slatted partitions, adding warmth to white marble counters and metallic pendant lights.

Pony Line
The polo-themed cocktail lounge inside the city’s Four Seasons Hotel mixes urban and rural accents to create an atmosphere of rugged sophistication. There’s abundant wood and leather, seen in parchment-clad trunks that function as side tables, tufted sofas, and booths modeled after horse stables. Seasoned bartenders use Argentinian botanicals such as aguaribay and yerba mate to jazz up classic cocktails.

Casa Cavia
A Palermo Chico concept shop that appeals to the senses: see exotic flowers at Flores Pasión, smell exuberant perfumes at Fueguia, browse limited-edition books at Ampersand, and taste market ingredients at La Cocina, all ensconced in a restored 1927 residence. The idea behind this elegant emporium designed by Britain’s Kallosturin? To bring together a series of talented ateliers and personalities, including chef Pablo Massey, who turns out contemporary Argentine cuisine at the restaurant.

Unik
Architect and restaurateur Marcelo Joulia turned a narrow space in Palermo Viejo into a showroom for vintage furnishings from his private collection: Dozens of original pieces designed by luminaries like Giò Ponti, Arne Jacobsen, and Yrjö Kukkapuro are set against wood-paneled walls and ochre banquettes. In the kitchen, chef Maximiliano Rossi sources ingredients from across Argentina for dishes like slow-cooked Patagonian lamb.

Tupã
A walk through a patio filled with unusual green and black plants leads to this edgy, concrete-walled boutique in Palermo. Designers Martín Boerr and Agustín Yarde Buller sell their own austere collection of asymmetrical dresses and lounge-inspired separates made of organza, linen, and silk, plus locally produced decorative objects and photography by Lucio Boschi.

Editor Market
It’s been decades since the city welcomed a high-end department store. Enter Editor Market, conceived by fashion investor Gabriel Brener, which opened last year inside an eight-story Rationalist building from 1943. The interiors were transformed into a series of light-filled loft-like showrooms that display the top brass of Argentinian design: Pablo Ramírez, Federico Churba, and Tramando.

Jessica Trosman
With the launch of her latest line, JT by Jessica Trosman, the avant-garde designer unveiled a new store, workshop, and textile lab inside an old factory in up-and-coming Villa Crespo. The vast whitewashed space by local architects NET, who installed two mirror-sheathed mobile dressing rooms, is like a blank canvas for her conceptual collection, inspired by everything from urban theorist Paul Virilio to Chinese martial arts.

Felix
This menswear label purveys the Porteño look to a T: dapper yet slightly disheveled. Its new shop in Palermo is awash in white, with tall vaulted ceilings punctuated by spherical recessed lights. Look out for made-in-Argentina ankle boots, textured cotton sweaters, and denim shirts.

Ruth Benzacar Galeria de Arte
Now headed by the founder’s daughter, this highly respected 50-year-old gallery moved from the classic neighborhood of Retiro to youthful Villa Crespo in 2015. Architect Nicolás Fernández Sanz transformed an old warehouse into a white vessel of light and air, with a skylight running through its pitched roof. Its commitment to contemporary Argentinean art—Jorge Macchi, Nicola Costantino—remains unchanged.

Casa de Gobierto
The city’s new eco-forward city hall, across the street from the spruced up Parque de los Patricios, became a magnet for fledgling urbanists and architects when it opened last year. Designed by Foster + Partners, the four-story, open-plan building has a glassed exterior topped by an undulating concrete roof that juts out like a canopy. Guided tours are offered on Saturdays.

Malba
New artistic director Agustín Pérez Rubio is ushering one of the region’s leading contemporary art museums into a new era by expanding its scope. Case in point: “Infinite Experience,” an experiential multi-artist instillation on view through June 8. Visitors will also see more than 500 works by Latin American masters inside a deconstructivist building with a sharply angled limestoneand- glass exterior in Palermo Chico. Av.

Casasur Palermo
One of the highlights at architect Giselle Chalu’s eye-catching property in Palermo is the buzzy rooftop terrace, decked out in airy cabanas and a 770-foot bar. The 61 rooms display a balanced mix of Scandinavian simplicity and modern luxury, with geometric wallpaper, sleek oversized headboards, black Acapulco chairs, and Petiribi blond wood pieces. Look out for the basement cabaret opening this year.

Lemon Apartments
These eight well-appointed pied-à-terres are a comfortable base from which to explore the outdoor markets, antique shops, and nostalgic bars of historic San Telmo. Local architecture firm Grin used unpolished woods for the walls, shelves, and headboards, providing an ideal frame for midcentury furnishings like Eero Saarinen tables and Bertoia chairs.

Hotel Clásico
Adolfo Suaya, who made a name for himself as a restaurateur in L.A., returned to his native and to open a 32-room hotel inspired by the Belle Époque. While the exterior of this newly constructed building emulates fin de siècle Parisian architecture, interiors showcase an eclectic style, juxtaposing restored antique chandeliers and parquet floors with industrial fixtures and wrought iron doorways.

Anselmo
It may be a Hilton, but as part of the brand’s Curio Collection, Anselmo feels like a tastefully designed boutique hotel. Hidden behind a renovated mansion from 1906 (rumored to have belonged to tango composer Anselmo Aieta), this modern 50-room property designed by the studio Rietti Smud is fashioned with cement, glass, and dark polished wood—a distinct contrast to San Telmo’s historic Plaza Dorrego across the street.

Mio
Owned by the fourth generation of the Catena wine-making family, this hotel honors its heritage with a 20-foot-high entrance door made from weathered oak barrels. A multilingual staff, privileged location in tony Recoleta, and special design elements such as sculptural bathtubs carved out of calden trunks are highlights, as is the Sivela 465 restaurant.

Ximena Caminos, Artistic Director at Faena Group
“Breaking the classic format for showing and selling art, Nat Sly and Larisa Zmud bring together rockers and researchers, artists, and millionaires, at Galería Sly Zmud, an old workshop in ‘Chaca-Crespo,’ as they like to call the neighborhood.”

“La Brigada has a real neighborhood atmosphere along with exceptional meat cuts— it’s one of the best grills in Buenos Aires. Try the braided goat chitterlings or the sweetbreads with a glass of a great Malbec before moving on to the legendary rib-eye.”

Alejandro Sticotti, Architect and Furniture Designer
“Florería Atlántico is a very cool place inside a basement that houses a flower shop, a wine boutique, a cocktail bar, and a casual restaurant on Arroyo Street in Retiro.”

“I really like the food at Las Pizarras Bistro. I’m an amateur cook, and it’s a pleasure to eat in a small, simple space where you know the ingredients are fresh from the market.”

Irina Kirchuk, Plastic Artist
“Plaza Castelli is a beautiful park edged by nice cafés and a small-but-smart bookstore calledaleidoscopio Libros. Some of the surrounding streets, like the tree-lined Avenida Melián, are quite unique and worth a stroll.”

“On Saturdays or Sundays, I like to stop by the Feria Parque de los Andes flea market at Parque los Andes, in the Chacarita neighborhood, and while I’m there, walk through the housing project built by architect Fermín H. Bereterbide in the 1920s.”