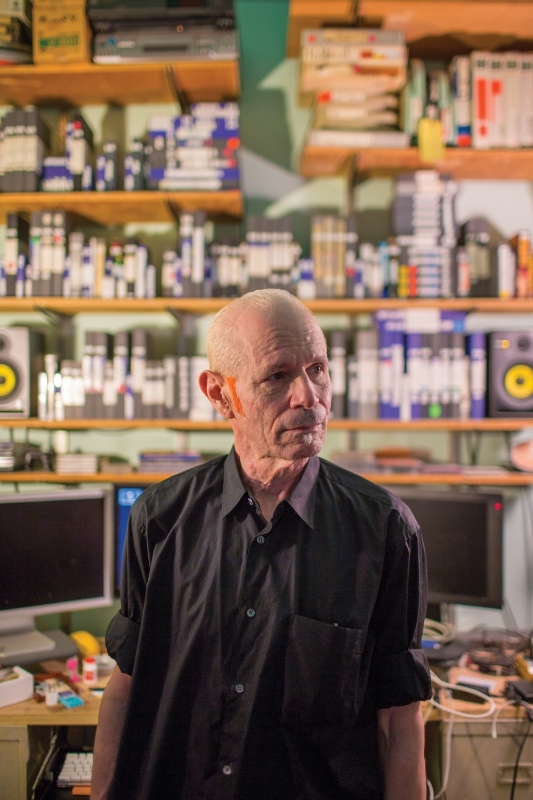 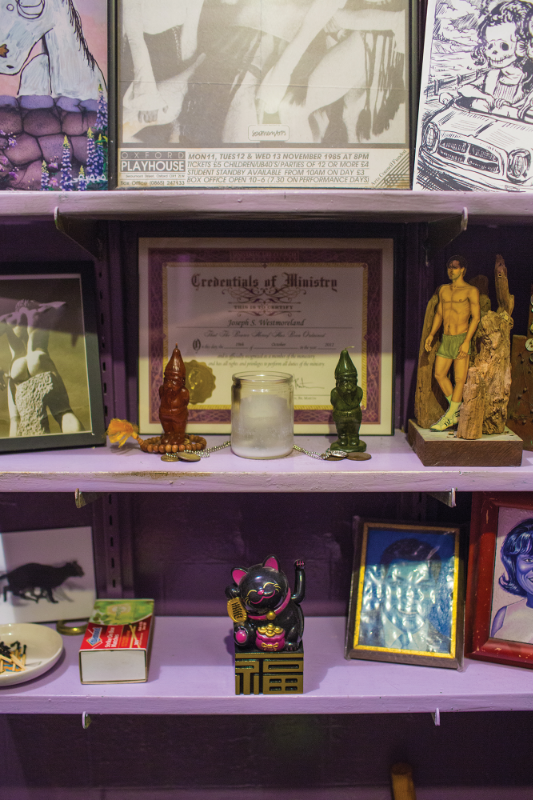 The New York–based visual artist opens his work space to discuss ’80s nightlife, a new exhibition at the Contemporary Austin, and a recent campaign for Calvin Klein.

The New York–based visual artist opens his work space to discuss ’80s nightlife, a new exhibition at the Contemporary Austin, and a recent campaign for Calvin Klein.

Was this after the AIDS crisis?

How long have you been working out of this Meatpacking District studio/apartment?

Since 1980. The neighborhood has changed, and it was a lot better before.

How is it working and living in the same space?

When I was first working full-time at Merce Cunningham Dance Company, I had an office and did most of my work there. I started freelancing in 1983 and moved everything to my apartment. At first I didn’t like the idea—nothing ever got finished. Now it’s just what I do and the idea of traveling anywhere for work seems like a waste of time.

Are there any visual artists you’re a fan of right now?

I don’t have any heroes. I think you do when you’re in your 20s. Mine were Robert Rauschenberg, Andy Warhol, and Jasper Johns, and it’s always stayed that way.

I don’t wait for inspiration. I’m from the school of: “Keep working and it will either happen or it won’t.” I don’t wait for a brainstorm. With some pieces, everything falls into place. Others are a lot more difficult.

What are you working on now?

I have an installation I’m doing in Texas: A two-piece show at the Contemporary Austin. One is called “Tornado Warning,” based on an installation I did in 2008. It’s very complicated: six channels, two rooms—all video. One room is very formal black and white; the other is a maelstrom of whirling images from a moving projector [to mimic the extreme weather events of St. Louis, where Atlas was raised]. The other piece is something I did with my choreographer friend, Douglas Dunn. I’ve worked with him many years starting in the ’70s. Over the years we’ve made a bunch of things together, and I’m taking that and making a four-channel installation out of it.  Then I have another show, “The Waning of Justice,” in Columbus, Ohio. It’s an exact replica of a show I did at Chelsea’s Luhring Augustine in February.

The “Waning of Justice” was political and dystopian. Your work to this point hasn’t been very political. Why the change?

What do you think our country’s problem is right now?

I trace the beginning of the end to Reagan, and then Clinton cemented the corporate takeover of the world. Corporate profits do not coincide with what people need or want; there’s a hopelessness that keeps people from getting excited enough to do something about it. For years, I thought there was an implicit plot not to fund education so that the people are less informed. But I’m not completely pessimistic.

You have frequently worked with drag queens. What is it about them that you’re particularly drawn to?

I used to go to the clubs when drag was a force in ’80s New York subculture. I was a door person for [promoter and convicted murderer] Michael Alig. It was a low point, but it was well-paid. I was up all night and slept all day. The drag queens became my friends and were really clever. It was just fun.

And dance has always been a big focus for you.

I worked with [Scottish dancer and choreographer] Michael Clark continuously for 25 years. I like dance. At a certain point, I was only doing dance and wanted to get out. It took me about 10 years to extricate myself, and then they got me back, but not in the same way.

The mythology of New York nightlife in the ’80s is almost unparalleled. What was your experience?

I would go to clubs four or five nights a week, starting in the ’70s when I was a big Studio 54 person: drugs, parties, brain chemicals.

How did you get any work done?

I don’t know, but I didn’t get much sleep then. It wasn’t like I had to go to an office. I used to have a job on Wall Street as a proofreader at a law firm, and I remember I had to wear a jacket. That would have never worked.

I read an interview in which you said you’re too old to sell out. So tell me about your new Calvin Klein campaign.

[Laughs] Well, it turns out that I’m not! It’s not the people I usually work with, but I did what I wanted to do.

Did the brand approach you?

Yeah, totally. The creative director and designers knew my work. The fashion people are mystified. I received a note from Graydon Carter [editor-in-chief of Vanity Fair] saying how great it was that Calvin Klein did something different.

What’s the balance between commerce and art?

Well, I have a New York gallery that sells my work. I don’t have the type of work that’s easy to sell—sometimes I wish I were a painter. I feel like film artists are like the court jesters.

It’s been a big year for you. Would you say it’s been the best year of your career?

I don’t think of things that way. The idea of showing pieces is less interesting than making them, but it’s nice to get recognized.