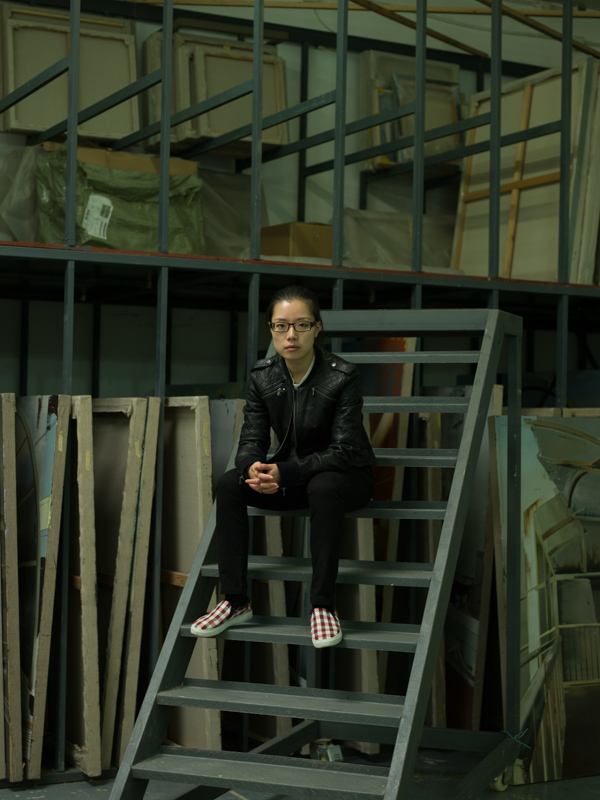 Cui Jie in her studio in Beijing. …
Art

The young Chinese artist prefers the comfort of her Beijing studio, while her work is making its way around the world.

The young Chinese artist prefers the comfort of her Beijing studio, while her work is making its way around the world.

In artist Cui Jie’s mirage-like paintings, various forms—buildings, surfaces, lines, and objects—appear to hover together, belying the time it takes to make each work. For Cui, a painting may take up to a year to complete, with each layer left to dry before the next can be started. This process no doubt contributes to the suspended look among the shapes depicted. When working, the artist moves between the canvases standing about her orderly studio in North East Beijing as she adds layers to one after the next.

One can tell that Cui, 30, is not from Beijing. A gentle speaker, she is originally from Shanghai and studied at the China Academy of Art in Hangzhou. Cui’s relocation to the capital was not a career move, but rather because of love—her partner, Liu Chuang, is also an artist. Her affair with the city has proved less-than-straightforward, though it has been artistically productive. The paintings for which she’s now becoming known are born of Beijing’s shifting urban fabric. “I didn’t like Beijing at first,” she says. “The city has power—it’s too big. I like to walk everywhere, but in Beijing it’s difficult. Perhaps I learned to like the city by painting it.”

When in Hangzhou, Cui’s work was decidedly different—single layers, groups of people, and trees. As one might expect, her work then was more “natural,” as she puts it, whereas now it’s focused on a built environment that’s developing constantly and mostly artificially. Upon arriving in Beijing, she spent two years changing her technique. “When I got here,” she says, “I needed a new mode because my feeling had changed.”

Like most artists who have attended art school in China, Cui is a well-trained figurative painter. Architectural forms and perspective were less familiar to her, and she had to study how to draw buildings in order to create her more recent urban landscapes—if that is what they can be called. Initially, she depicted views she witnessed en route from her home to her studio each day. Now, on occasion, she rents a car to travel a planned course within the city, taking photographs along the way for later use in the studio. It has become her habit to stand on a bridge or traffic overpass from which she can take in a number of different vistas at once and begin to conjure a composition in her head. The current series of paintings are built up with a combination of views. Cui freely attributes this approach to the influence of Orson Welles’s films, wherein multiple perspectives are used. Her geometric works could also be viewed as loosely recalling Russian Constructivist artworks, as well as the early drawings of Zaha Hadid.

The paintings—three of which are currently on view in the exhibition “My Generation: Young Chinese Artists” at the Oklahoma Museum of Art (through Jan. 18, 2015)—are striking and full of depth. The sweeping curved form of a flyover, a bar, black escalator tape, or a roadway arch are precisely drawn and juxtaposed with dynamic lines that recede along perspectival vectors. Splinters of geometric shapes denote the textures of modern buildings, and are visually conversant—in many of her works—with other patterns. A seeming transparency allows one to see through one layer to another, dissolving the usual solidity of concrete. In texture, the paintings veer between thick antipasto and areas bravely dragged across with a wide, flat implement. Straight lines are scored into the various layers of paint with a fine point.

Cui tends to paint on canvases measuring roughly 60 to 80 inches. The paintings share a compelling, slightly strange palette. Aqua greens and terracotta browns or oranges stand out against light gray or cream backgrounds. “Patches of color can easily get into a relationship of competition,” she says. “It’s like a war.”

Cui makes perspective—or its perversion—king in these works, tampering with reality’s rules for space, light, and gravity. Objects or shapes appear to float, outlines cease abruptly or continue as they might in a blueprint, and shadow is all but eliminated. With each work Cui generates a somehow-consistent visual world. One senses a certain compulsive atmosphere among the paintings, each of which speaks of Cui’s drive to create them as a response to the environment. As if to answer this sensation, Cui says, “It’s my life—it’s not about liking or not liking [Beijing]. I work with the reality of living here.” She describes painting as a sort of therapy—although, she adds, “my work is not only optimistic. There is also something painful and solemn about it.”

Cui admits she only feels safe in her own studio. Asked about what stage she feels her work is at now relative to how it began, she says she’s afraid of developing her own style; there are things she has cast aside relative to her practice, but she will not say what. On the state of art in general, she says, “I don’t think art is going to challenge anything, nor does it face any challenges.”

Cui exhibits a quiet confidence, and believes she was born to be an artist. Her recent paintings evoke a desire to grasp—or at least to momentarily contain—the fractious urban landscape of Beijing, a city where 20 years is considered old for a building. It is at once a sublime and exhausting terrain to which she stays attuned. “In my work,” she says, “the thing I am most loyal to is change.”