The space doesn't just greet visitors or connect the various museums on the site—it adds some modern drama to the Pre-War institution.

The James Simon Gallery—a gateway, presentation space, auditorium, and information center for those visiting Berlin’s Museum Island—recently opened to some well-deserved fanfare. The gallery, designed by David Chipperfield Architects, is not only a sharp, white marvel, it’s opening is both a turning point in a 20-year-long effort to expand the Island’s offerings. The James Simon is the final chapter in what is the first truly new large-scale construction project on this UNESCO World Heritage site in almost 90 years.

Linking the five museums (and an eventual sixth opening soon) through galleries and causeways under the Archaeological Promenade, the James Simon strikes an interesting tone amidst all the imposing Neoclassical and Art Nouveau structures. While its columns and long, low-raked steps echo its surroundings, its stark-white, angular form seems a quiet challenge to the older architectural bodies around it.

In terms of Chipperfield’s output, the exterior of the James Simon most resembles his work on the 2007 Museum of Modern Literature in Marbach, but more exclamatory thanks to its massive, welcoming, above-ground entrance. One might think it’s a fully-realized, light-bathed version of the new with starkly minimalist stairs and supports his firm provided to the Neues Museum—which was complete in 2009 and happens to lie right beside the James Simon. Of course, Chipperfield’s style and oeuvre are somewhat hard to nail down, so where exactly this rests in them is anyone’s guess.

There’s been at least some criticism of the gallery. Some have objected to its overall utility, contextual appropriateness, the new sight lines it creates, and, yes, the price. The project is also catching some of the heat already directed at the Island’s sixth museum, the Humboldt Forum, due to open next year. But as you can see from the images, however, the angled, alabaster results of Chipperfield’s work offer quite the response. 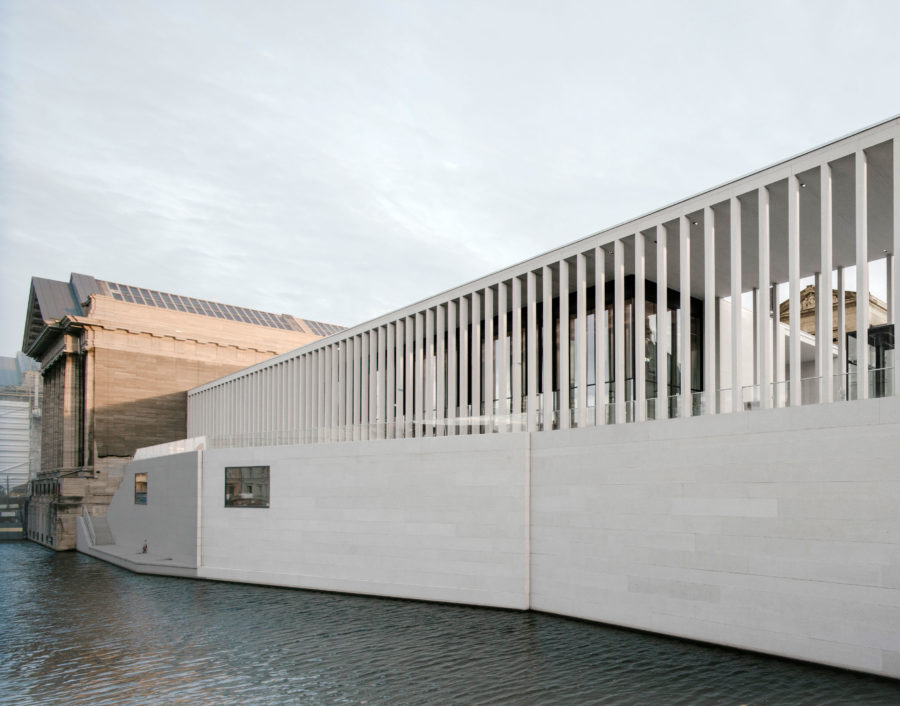 Can a Group of Designers Solve London’s Urban...

These Lucky Birds Are Balling Out at the Brooklyn...

One Brand’s Bid to Build the World’s Greenest...

Designer of the Day: Casey McCafferty

A New Elevated Park Offers a Blueprint to Cooling...