On Wednesday, Nov. 7, Surface hosted the 48th installment of its Design Dialogues series.

This edition featured Kimberlie Birks, author of Design for Children; Juliet Kinchin, the Museum of Modern Art curator behind the exhibition “Century of the Child”; and David Weeks, founder of David Weeks Studio. The discussion took place in Manhattan at MoMA Design Store Soho. The four discussed how designers have influenced and reflected changing ideas about childhood over time, as well as the greatest hits—and misses—of design for children.

Birks began the discussion by describing  some of the objects she encountered through her research when writing Design for Children. “Looking at how we’re fostering imagination within kids, often we think of kids today and screens, and video games and things that are very prescriptive. The most exciting objects to me were the ones that were more open-ended, that really gave the child their own agency to create their own story and that weren’t totally telling the child how to use the object,” she said. “If you look at the beginning of the century to the present, that repeats itself again and again.” She added, “Creating curious minds and children that will grow up thinking for themselves. If they have agency for their own play, they are going to have agency in their own life.” 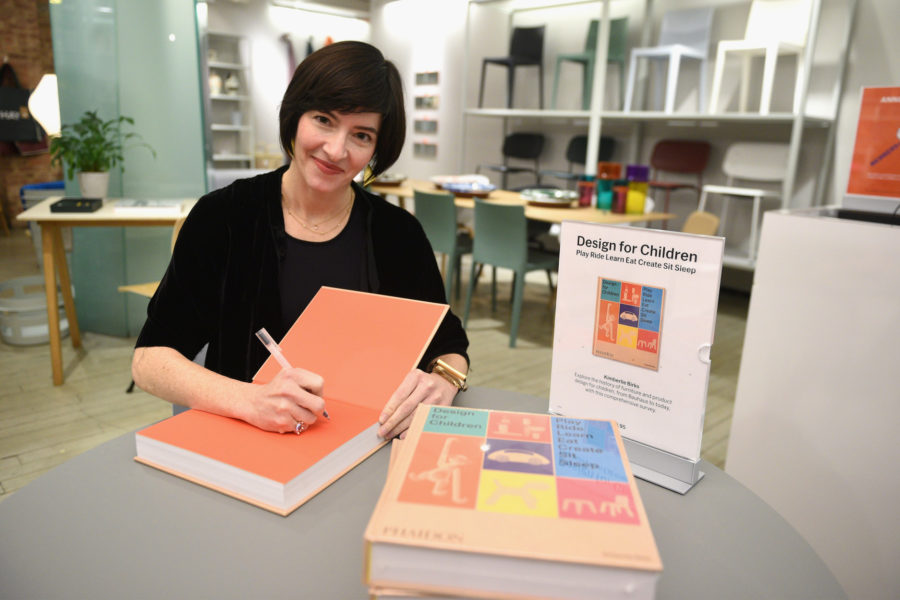 Hanley asked the group to name a few examples of great design for children. Kinchin brought up the Tripp Trapp chair, a high chair designed by Peter Opsvik that converts into a chair for toddlers and then young children. “It is a chair that can grow and develop with the child,” she said. “It’s such a beautiful and simple way of helping to prompt very positive social interactions between kids and adults around a dining table. They’re not in a child’s chair and they’re not at a separate table, but they are part of a general social interaction and conversation. I think it’s got all the hallmarks of that flexible inclusive design.” Birks mentioned the Free Universal Construction Kit. “It’s an open source 3D-printed set of 80 connectors that kids can then use with all sorts of different building sets,” she said. “It is a modern example that really speaks to what is going on with technology now. It also gives children the agency that they wouldn’t have otherwise been able to access.” Her one criticism, “It doesn’t have a kid-friendly acronym,” got a laugh from the audience.

As the conversation progressed, Hanley asked the panelists to describe how Instagram, and parents circulating images of impossibly well-styled children surrounded by tasteful Scandinavian furniture. “How does social media shape our contemporary understanding of childhood or how play is represented?” He asked. “Luckily social media didn’t impact on my childhood,” said Kinchin “But, what I really remember so strongly from my childhood is just messing around, a lot of time outside, a stick in a puddle, the smell of the wood and the materials—the tactility of it. There is so much of that that is difficult to access now as a child.” Weeks added his perspective on the relationships that he had with physical toys versus the relationship that children have now with technology: “I was just thinking back on that moment in the contemporary toy world where everyone is posting like, Look at my great kid with this great thing,” he said. “Back in those days you look at these blurry little snapshots and say, Oh I forgot about that toy. Because you had such a real relationship with these objects that were very personal and individual. I often wonder if my kids will have this same relationship with little app that they see.”

Hanley concluded the talk with the discussion of the notion of what is beneficial for kids to be playing with being contingent on society. He asked Birks, “What ideas or actual objects are answering the contemporary definition of childhood… or encapsulating thinking about what kids want and need right now?” Birks reverted back to the notion of letting a child create and imagine for themselves instead of having a preexisting way to play with something. She described one of her favorite toys from her book, the Rigamajig. “It is planks, nuts, bolts, all sorts of different parts that children have to work together to create some structure of their own imagination. What I like about it is that it has kids working together and creating anything that they can imagine. It does subscribe that sense of not having anything predetermined. You give the kid a set of parts and let them create.”

An Art Exhibition That Questions What It Means to Be...

Form Us With Love and Shaw Contract Have Created Something Limitless