Rising Through the Ranks

Emeco’s Navy Collection is a symbol of American design with military roots.

Emeco’s Navy Collection is a symbol of American design with military roots.

“Emeco chairs are like Levi’s,” says CEO Gregg Buchbinder. “The jeans were sort of industrial, and then somebody put a blazer on, and they became cool.” Emeco, an all-American brand itself, about-faced in a similar way. Buchbinder took the business over from his father in 1998, who had bought the then-floundering company from the estate of founder Wilton C. Dinges during a sink-or-swim period. It’s a fitting idiom considering its flagship product, the 1006 Navy Chair, was commissioned by the U.S. government during World War II, when the company was tasked with creating purpose-built seating to withstand military submarines. Demand declined after the Cold War, and it was up to Buchbinder to carve out a new niche. It wouldn’t be until 2000 that, like dressing up a pair of jeans, Philippe Starck created Emeco’s first new silhouette in more than 50 years, raising the curtain on a second act.

Becoming a design-minded furniture company was “totally an accident,” says Buchbinder. Before the switch, he noticed the simple aluminum Navy Chair in high-concept spaces like Ian Schrager’s Starck-designed Paramount Hotel in Manhattan and a Frank Gehry project in L.A. Seeing an opportunity, he went door to door in New York’s SoHo neighborhood with a chair in hand, trying to find stores that were willing to sell it. The mission was unsuccessful. He did, however, find better luck at the ICFF furniture fair in 1998, despite the fact that the company couldn’t afford to exhibit. Instead, Buchbinder roamed the aisles, and ended up running into Starck. When he introduced himself as the owner of Emeco, the designer was surprised by his down-to-earth California vibe: “You?” Starck asked. “I thought it would be a bunch of old military men.” Starck had admired the brand from a distance, so he offered to design a piece for the company pro bono. The resulting Hudson chair was the first of a slew of collaborations to come.

As the relationship with Starck flourished, so did Emeco. “He helped me understand what we have,” Buchbinder says. Starck was so clued in to the company’s inherent value and untapped potential that he even took interest in the brand’s marketing efforts, encouraging Buchbinder to employ a little good-natured guerrilla warfare during Milan’s Salone del Mobile design and furniture fair in 2000. “We were parasites at all of the major parties,” Buchbinder recalls. “We showed up in a billboard truck and parked it right in front. It cracked him up.” The messaging, “Heritage Against Recycling,” was also Starck’s idea, and touched on a major characteristic of Emeco products, appreciated by sailors and civilians alike: They’re built strong, to weather the storm, so they’ll never have to be recycled.

Such is the reward for 77 laborious, hand-done steps that take place over 10 days to complete a Navy Chair. Despite the big-name collaborators in Emeco’s catalogue—Jasper Morrison, Ettore Sottsass, Jean Nouvel, and, most recently, Sam Hect and Kim Colin of the London-based studio Industrial Facility—what happens inside the company’s Hanover, Pennsylvania, factory is fundamental and considered. It bleeds into each product—simple lines, sustainable materials, strong construction. The fabrication process is complicated, Buchbinder says, and without preservation it could become obsolete. He shouldn’t worry. With Emeco, an American icon is alive and well. 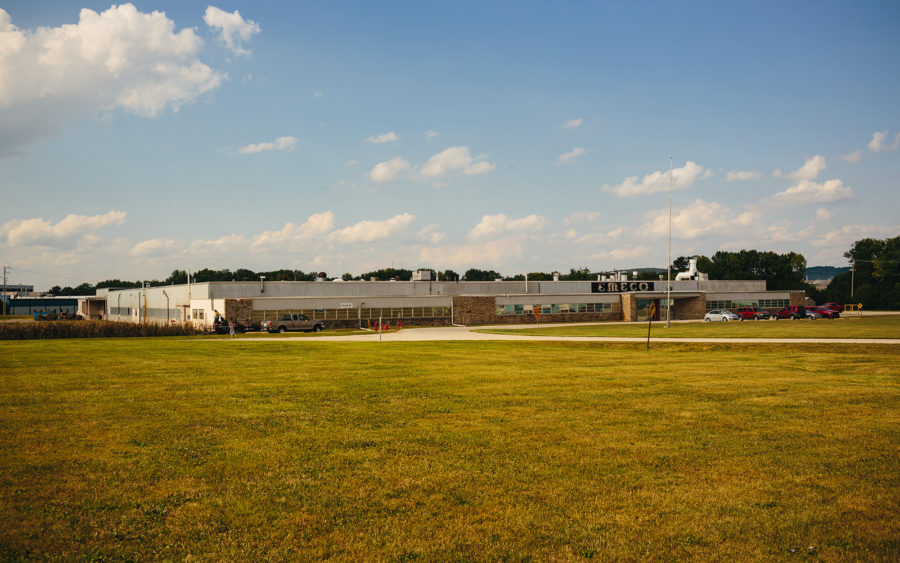 Emeco’s operations have been in the same factory since its founding. A few of the current employees even worked for the founder, Dinges, in the company’s earlier days.

Fifty miles away, in Baltimore, vice president of product, Magnus Breitling, works out of the company’s design and research studio, nicknamed “the sweatshop.” Though the 1006 Navy Chair remains unchanged, his focus is innovating with new materials and offerings, and liaising with guest designers. An experienced German engineer, Breitling formerly held positions at Vitra and Porsche, and was hired by Buchbinder after losing a push-up contest. The anecdote speaks to the welcoming and familial environment cultivated behind the Emeco’s doors. 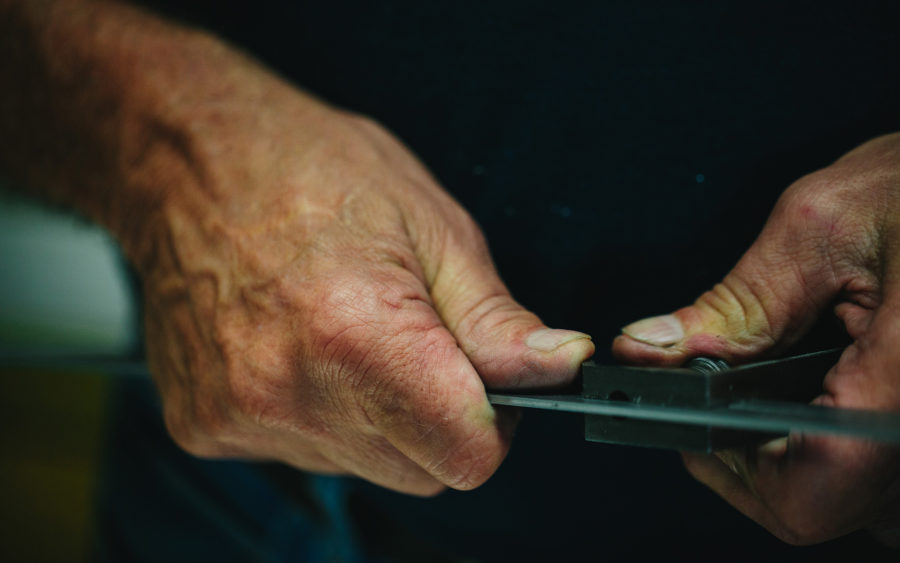 Though the end result is a product that’s hard, tough, and non-corrosive, the manufacturing process starts with soft sheets of recycled aluminum. The raw material is precision-cut into pieces and the extruded aluminum parts are then bent using a modern machine—it’s only been in Emeco’s factory for about two years—that applies pressure and bends the parts. Among the many other machines is one that stamps the seat‘s imprint. 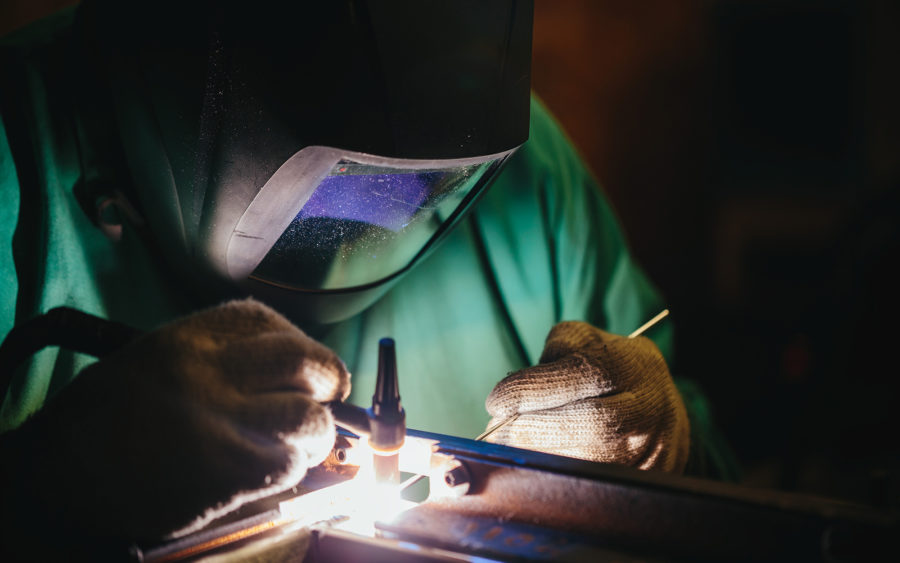 Once pieces are cut and bent into the proper form, they’re welded together to create the chair. It’s a craft that takes about two to three years of training to master. Welder Ralph Smeak, who is one of Emeco’s longest-serving employees, has been working there for 47 years—since he was 18. According to the factory’s forewoman, Sharon Fisher, Smeak can identify a problem with a chair just by looking at it. 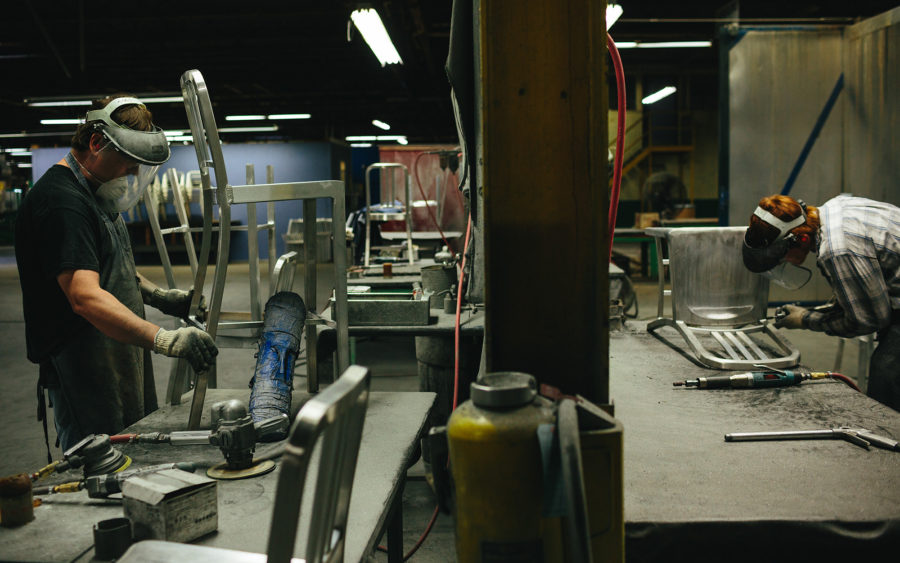 The chair’s surface goes through rounds of sanding and grinding. Rough edges and weld marks are smoothed out and burrs are sanded away.

The welding marks at the top slats of the 1006 Navy Chair are not ground smooth. It’s a signature of Emeco’s craftsmen, and verification that it’s authentic. 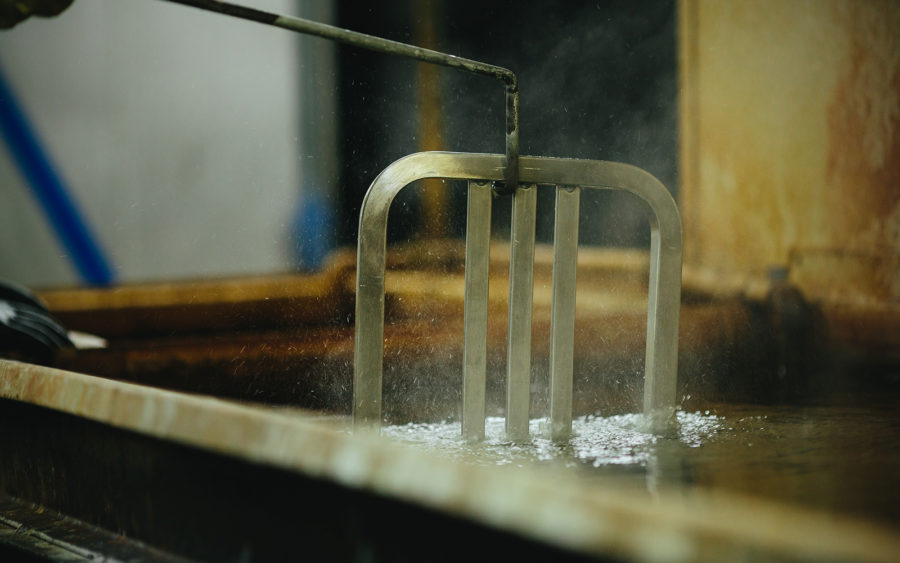 Smoothed chairs go to “heat treat.” Here, they’re submerged in a 1,000° Fahrenheit salt bath, in which a chemical reaction turns magnesium and silicon into a tough, unbendable metal. A 10-minute dunk in water seals the reaction. The chairs then spend the night in a 300° oven. 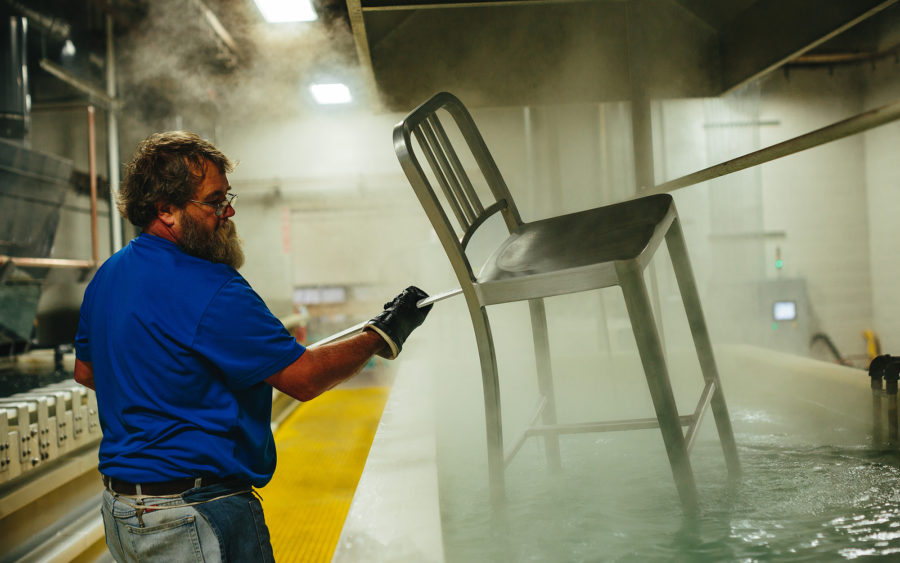 After a final round of hand brushing, chairs are anodized. This last step adds a thin coating that makes the aluminum resistant to corrosion and wear—a characteristic that once attracted the U.S. military to the chairs.

The anodizing process starts with washing chairs in a soap tank, then rinsing them in hot water for 10 minutes. After that they’re placed in an acid tank for 15 minutes, where electricity runs through to seal the coating. Finally, it’s submerged in cold- and then hot-water rinses. Once complete, the chair is hooked to a moving conveyer that leads to the shipping department.

Looking Back on Take Five