Parisian designer Dorothée Meilichzon draws almost every element of her projects by hand, so perhaps it’s no surprise she mined the Middle Ages for design cues at the 18-room Henrietta Hotel in London’s Covent Garden, once the vegetable patch for Westminster Abbey. “I used a lot of organic elements: handmade terra-cotta tiles from France, grain wood floor panels and the herbarium on the walls,” she says, adding: “Animals are even invited to my garden party!” By this she means the larger-than-life tiger hand-painted on the ceiling, and hallways plastered with safari-animal-print wallpaper. For the guest rooms at her first London property, another in a growing list of collaborations with the team behind Experimental Cocktail Club, Meilichzon embraced the Anglo-Dutch style of two town houses, extrapolating silhouettes from the area’s distinct window arches, capitals, and bas-relief. These shapes appear as aggrandized headboards behind the well-plumped beds, geometric mirrors, and the bathroom’s half-moon glass capital, an especially charming touch. Of course, much like at ECC’s first hotel, Grand Pigalle in Paris, there’s considerable talent in the kitchen and behind the bar. Chef Ollie Dabbous, one of the city’s brightest culinary stars, conceived the French-inflected menu, while the cocktails come courtesy of drink historians Jared Brown and Anistatia Miller. They’re served in an intimate, glass-roofed atrium on one of the neighborhood’s most historic streets. henriettahotel.com, rates from $240 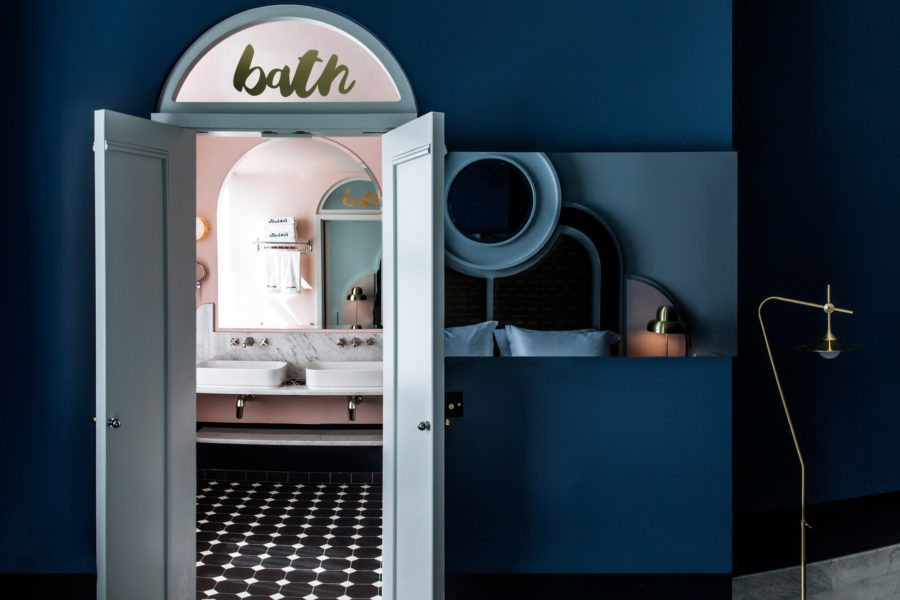 8
Slideshow
Inside Henrietta Hotel
A view into a bathroom. …