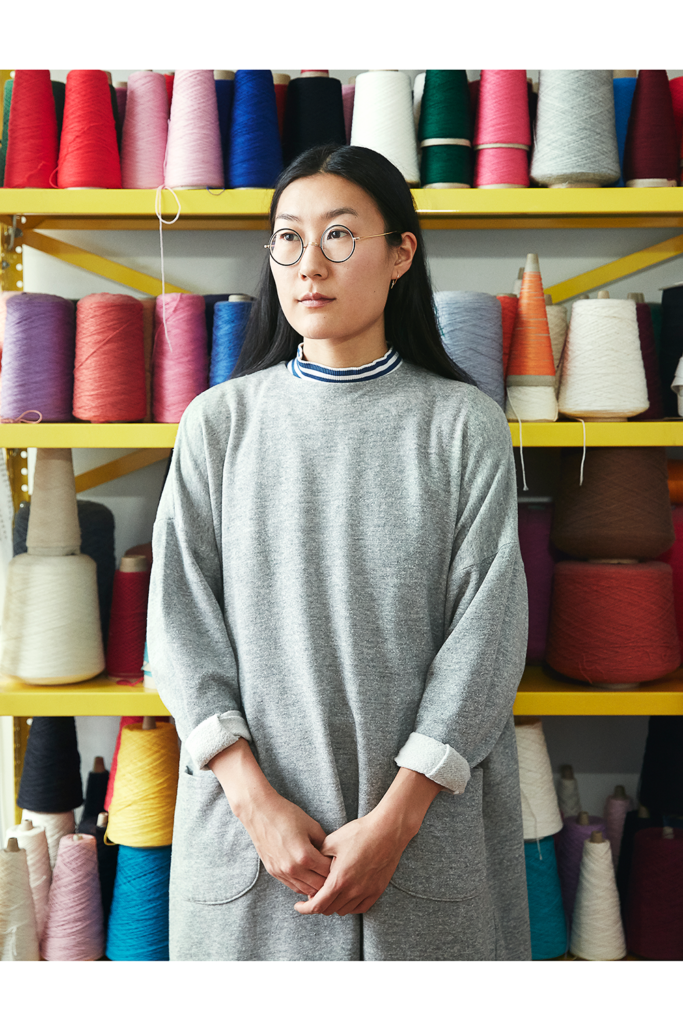 Annie Lee Larson approaches her clothing label with an artist’s attention to craft.


By BETTINA KOREK
PHOTOS bY KATIE THOMPSON
March 16, 2017
Share
Back

Annie Lee Larson approaches her clothing label with an artist’s attention to craft.

At a time when mass-market brands tout the “handmade” quality of their products in food and fashion alike, it’s clear that the public has an increasing hunger for everything artisanal. This development can be traced to the late aughts, when the indie-craft movement took off on the internet, producing an explosion of DIY and design blogs—and, of course, Etsy.

Annie Lee Larson, founder of the knitwear line ALL, notes that this shift toward the “micro” was indeed a collective reaction to the very online technology that empowered it, helping millions to develop their craft and promote their work. “It leveled the playing field,” she says.

Larson, 33, was raised in Wisconsin, and launched ALL in a Minneapolis storefront in 2010, partly in response to three years of working as a designer for Target. While many independent designers dream of producing on such a large scale, the corporate context wasn’t a good fit for her. “I knew it wasn’t what I wanted to do in the long term,” she says. ALL—which takes its name from her initials—speaks both to Larson’s inclusive ethos and to the democratic qualities of knitting—something that can be personalized and is available to anyone.

In 2011, Larson moved the company to New York. Today ALL is known for its bold colors, bright patterns, and inventive shapes, each piece coming directly out of her Brooklyn studio.

On the surface, it may seem that founding ALL was Larson’s lifelong dream. But when she was first starting out, she had no experience making knitwear. In 2009, on a whim, she bought her first sewing machine. Shortly after attending a knitting-machine demonstration, she bought one of those, too: “I practiced a lot over the next eight to 10 months before starting the label.” Larson has since purchased several of these Brother double-bed machines—popular with hand knitters until they were taken out of production, in the 1990s. Similar to the fate of Polaroid, these early technologies built to enhance human creativity became evermore rare due to the difficulty in finding parts and materials. Ironically, Larson has had to downgrade her computer in order to install the knitwear technology she uses to translate her designs into patterns.

Now, with a successful company and a devoted following—her brand is sold by retailers around the world, from Shanghai to Sydney—Larson has come a long way from her early corporate career in the Midwest. She teaches two courses at The New School in New York, and continues to push the boundaries of her craft. Fashion trends are of little concern to her. Because knitwear, according to Larson, has never entered the New York fashion world “in a way that feels committed,” she has avoided working in the mold of traditional seasons. Instead, she has built a body of work composed of about 60 vibrant designs.

Which brings up another key component of Larson’s practice: She looks to the work of artists—particularly the colorful, linear aesthetic of Jim Drain—for inspiration. And she engages with them directly. For example, she recently made a trade with Los Angeles artist Ry Rocklen: in exchange for his bootleg Clinton-Sanders 2016 sweatshirt, she offered him a shirt with an allover grid pattern formed by two versions of “Made in the USA” tags that she created. (Knitting, in this case, was not involved.) Personal and hands-on, Larson’s efforts embrace those of many of her artist counterparts. In large part thanks to the internet, she’s gotten her work out there.