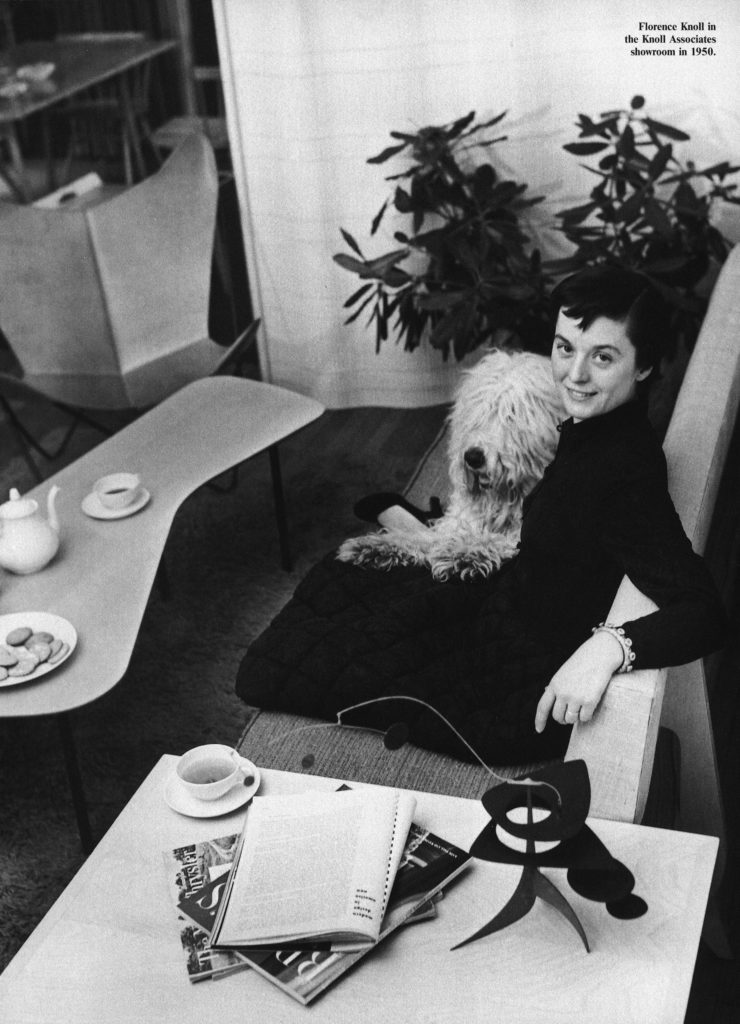 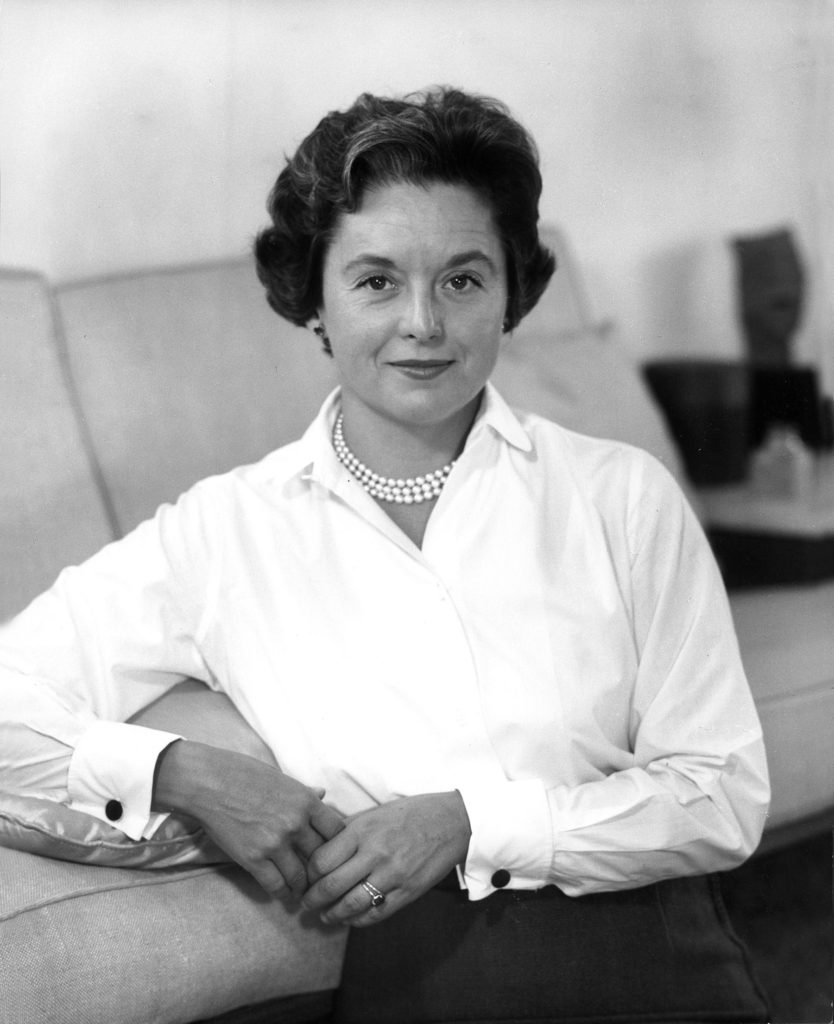 The design industry looks back on Florence Knoll Bassett's accomplishments after passing at the age of 101—and reflects on her legacy.

The design industry looks back on Florence Knoll Bassett's accomplishments after passing at the age of 101—and reflects on her legacy.

“When I was in my early twenties I moved to San Francisco and came across a three-piece Florence Knoll couch—one of the earlier versions, with the angled back and parallel bars. It was very cheap because it was completely destroyed, but there was something about it that I loved. It had a lot of strength and personality. It was essentially by loving the piece and renovating it that I became familiar with the breadth of her work. I went to the Knoll showroom and spent a lot of time picking the right fabric, and it became immediately apparent to me that the sophistication and variety of the textiles were unique to her legacy and [to] her input into the company. [They] were certainly an early influence.”

“The bar is set really high—that’s how we feel about the incredible force and true pioneer she was. She was only 30 when she started the division. Rather than stick with what everyone else was doing at the time, which was chintzes and brocades and florals—very traditional ideas—she sourced men’s pinstripe suit fabric, which was the first instance this type of textile was used for upholstery. She designed beautiful textured solids and impactful large-scale modern patterns that were more about line work and less about fussiness. That’s where she set the tone for the company and the types of designs that would live on at KnollTextiles, whether produced in-house by someone like myself or a guest designer. It’s always been as if Florence’s point of view and the spirit of what she did then has to live in what we do today. That’s part of continuing her legacy—making sure we live by who we are.”

Zoë Ryan
Chair and Curator of Architecture and Design, The Art Institute of Chicago

“Knoll Bassett took the field of interiors, which was not taken as seriously as architecture, and made it equally as valuable and valued. She was really important in terms of communicating ideas—which is what designers seek to do well today. How do you present not just finished designs but the process, and allow people to be part of that? She was able to explain the methods and decision-making. The combination is really key, especially because it is so relevant to how designers work today. Florence Knoll Bassett believed in bringing people together. She was fearless in that regard—especially as a proponent and supporter of women. She believed in talent and knew how to foster it, which is something to be celebrated. She surrounded herself with the right people, [an important lesson] for any of us: Look for the right people who will instill you with confidence. Times have evolved but some of the kernels of those ideas are so relevant in today’s practice. That’s why she’s such a good role model—there are few Florence Knolls in the world.”

“Several tactics from Florence Knoll Bassett have become part of my approach to design. The first is the strong relationship between a piece of furniture and the environment it is intended for. She saw the development of furniture in sense of need, for a total job. She would stress to Eero Saarinen the need for a decent office chair, for instance. As I have understood it, many of her briefs came out of a specific need from interior jobs she was working on. Another method is recognizing the distinction between a figure and ground in furniture and interiors. Knoll Bassett worked on what she called ‘the fill-in pieces,’ while letting Saarinen and Bertoia take ‘the stars.’ Her sofas provided a rectilinear ground to their more figurative works. The combination resulted in a figure-ground relationship. Before starting a project I ask myself which camp whatever I am working on belongs to, and how to stimulate the figure-ground relationship in a space. These methods transcend time, and can be adopted and built on by future generations.”

“Florence Knoll Bassett was a trailblazer. She broke ground for not staying within the mills that were known for upholstery or drapery fabric—she explored woolen blankets from the war and automotive stretch fabrics. She went outside the industry to look at other materials that were being developed. She was not a cabbage rose person, and in turn, she developed technical fabrics. She should get the credit for creating interior design as a profession: She started understanding how the placement of furniture and desking worked within a corporation and had the left brain/right brain ability to mastermind her creation, but also to maintain business. She created the concept of sampling — it’s a time-honored tradition that allows architects and designers to see the product, to feel it and touch it — so you can look at your materials in situ with lighting, which is different everywhere.”

Michelangelo Sabatino
Dean of the College of Architecture, The Illinois Institute of Technology

“When she arrived at the Illinois Institute of Technology (Armor Institute at the time) in the late 1930s, she was one courageous young woman to venture into what was a predominately engineering-driven university. Imagine her being one of very few women training under Mies van der Rohe (who arrived in 1938). She graduated in 1941. It is interesting that she would take his very disciplined approach to materials and to making, and also introduce an elegance and personalization. We’ve all trained under great leaders of design or architecture, and it’s about what you can do with it. She was negotiating the possibilities of large-scale production with the kind of need to personalize environments, a continuing struggle today. She took tough materials like steel and brought an amazing sensual quality to them. She managed to combine an approach where multiples were being produced and to bring in a personal quality to that. [Knoll’s] ability to look at her environments using art and paintings and textiles—and leave no details unchecked—was impressive.”

Executive Credenza
Conceived as part of a new standard for the modern workplace, the revolutionary Executive Credenza allowed files to be moved parallel to the wall rather than pulled out from a drawer, decreasing visual clutter and creating a more open flow in the office.

Hairpin Stacking Tables
Introduced in 1948 as the Model 75 stacking stool, the hairpin table began as an early study using steel rods that Knoll Bassett designed while at the Cranbrook Academy of Art. The original was produced until 1966. It was revived for the Innovative Furniture in America exhibition at the Cooper Hewitt Museum in 1981.

Dining Table
Originally imagined as a desk—and one of her so called “meat and potatoes” prototypes, designed to fill a void during a specific project—this industrial yet elegant piece has seamlessly transitioned into the residential sector.

Designer of the Day: Hanako Maeda