In early March, the Swedish direct-to-consumer furniture brand Hem was preparing to open its first permanent East Coast location. After months of scouting, founder Petrus Palmér felt like he finally found the ideal spot: a 2,500-square-foot historic loft in the heart of New York City’s SoHo neighborhood, long a hotbed for high-end fashion boutiques and design showrooms. “I’ve always been drawn to SoHo for its energy,” says Palmér, who was hours away from christening the studio with a festive opening-night cocktail when Covid-19 suddenly caused the city to shelter in place. For many in the New York design sphere, Hem’s decision to call off the party was the first of many, portending a spate of similar cancellations that have since become routine as the world continues to abide by social distancing.

It’s a shame—Hem positioned the studio to become a dynamic community hub for locals, akin to visiting a friend’s apartment instead of a “gallery-like showroom where furniture is presented like precious art pieces,” says Palmér. (“Hem” is Swedish for “home,” after all.) The brand’s in-house design team envisioned the studio as a series of domestic vignettes, including dining room, living room, and kitchen setups, that can be easily reconfigured depending on the programming, and will feature a rotating selection of Hem’s greatest hits. “This ability to modify the studio’s layout has been invaluable during the pandemic when we need to be flexible,” says Palmér, who enlisted Asad Syrkett, New York City Business Development Lead, to host safely distanced visits with clients during the quarantine.

The pandemic has forced Hem, like many businesses, to think outside the box in offering customers compelling ways to engage digitally now that in-person experiences, for the most part, are out of the question. Expect virtual studio tours, designer-led workshops, and panel discussions later in the fall when the dust settles. “Overall, we want the core experience to remain,” says Palmér. “Our studios are a place to interact with Hem’s products and people in person, and help drive a visitor’s imagination about what’s possible in their own space.”

That convivial energy has long been one of Hem’s defining characteristics, helping the brand establish a firm footing as one of the design industry’s most agile and down-to-earth purveyors of pared-down future classics. Though Hem often enlists vanguard designers like Max Lamb, Luca Nichetto, and GamFratesi for collaborations, its furniture and lighting is decidedly unfussy, relying on familiar silhouettes and time-honored craftsmanship to speak for themselves. Lamb’s Max Table, currently on display in the studio, exemplifies this notion; it’s a rectangular solid ash table, pared down to the utmost essential, that functions equally as an eye-catching centerpiece and a powerful ode to simplicity.

Though Hem often forgoes the flashy for the subtle, the brand has never been afraid to be playful and take risks. A recent line of limited edition-ceramics, with experimental designs by Jenny Nordberg and Supergroup, departs from the classic Scandinavian minimalism that runs deep within Hem’s other offerings. Visitors to the brand’s pristine headquarters in Stockholm, meanwhile, immediately encounter an acid-yellow reception desk covered in amorphous blocks that resemble marshmallows. Designed by the London studio Soft Baroque, each brick is made from an innovative molding technique that involves injecting concrete balloons with jesmonite. 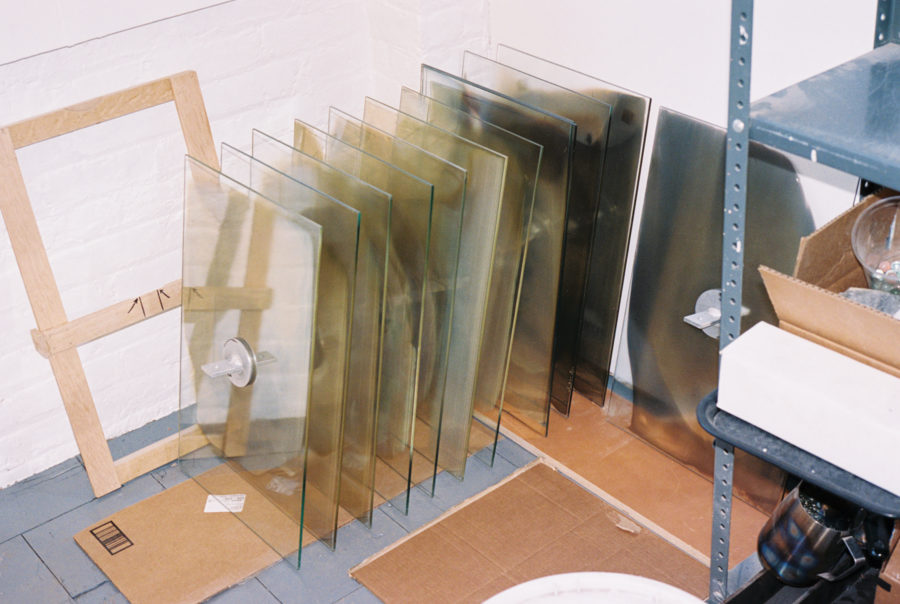 A similar pièce de résistance, crafted by the beloved design duo Chen Chen & Kai Williams, beckons visitors inside Hem’s studio in New York. Situated near the entrance, an easel-like structure affixed with 20 glimmering glass panels creates a multi-dimensional grid of semi-opaque mirrors, almost like a deconstructed skyscraper. The pair created each individual panel by pouring a thin layer of silver nitrate over a pane of glass, leaving the silver’s raw edges visible on the clear surface. “The traditional silvering of mirrors is magical,” says Kai, who fine-tuned the process when developing a series of mirrors for The Future Perfect’s booth at Design Miami this past December. “It’s only a 30-second process, but when the chemicals react, the glass turns from clear to silver.”

Appropriately called The Phalanx, the towering sculpture references Ancient Greek war formations and the mathematician Archimedes, who captured the sun’s rays to burn Roman ships sailing into the harbor. But instead of fending off enemies, Chen & Kai’s centerpiece aims to captivate passersby and draw reflections of the city inside, aligning with Palmér’s intention to celebrate New York’s rich history. “It creates a visual collage of everything in one image and invites you to see the different ways in which you’re reflected,” says Chen, who didn’t want the end result to resemble furniture. Rather, it’s the ideal complement: “It pulls your attention to places that wouldn’t otherwise be in your direct sightline.”

Though the design cognoscenti might not be able to toast the studio or The Phalanx in-person anytime soon, customers can still schedule private appointments and walkthroughs. (As an added bonus, any purchases made on-site will come with same-week delivery.) As for the party, Palmér remains cautiously optimistic: “We hope that someday we’ll be able to properly celebrate the New York Studio with all our friends here when it’s safe to do so.”

Designer of the Day: Bower Studios