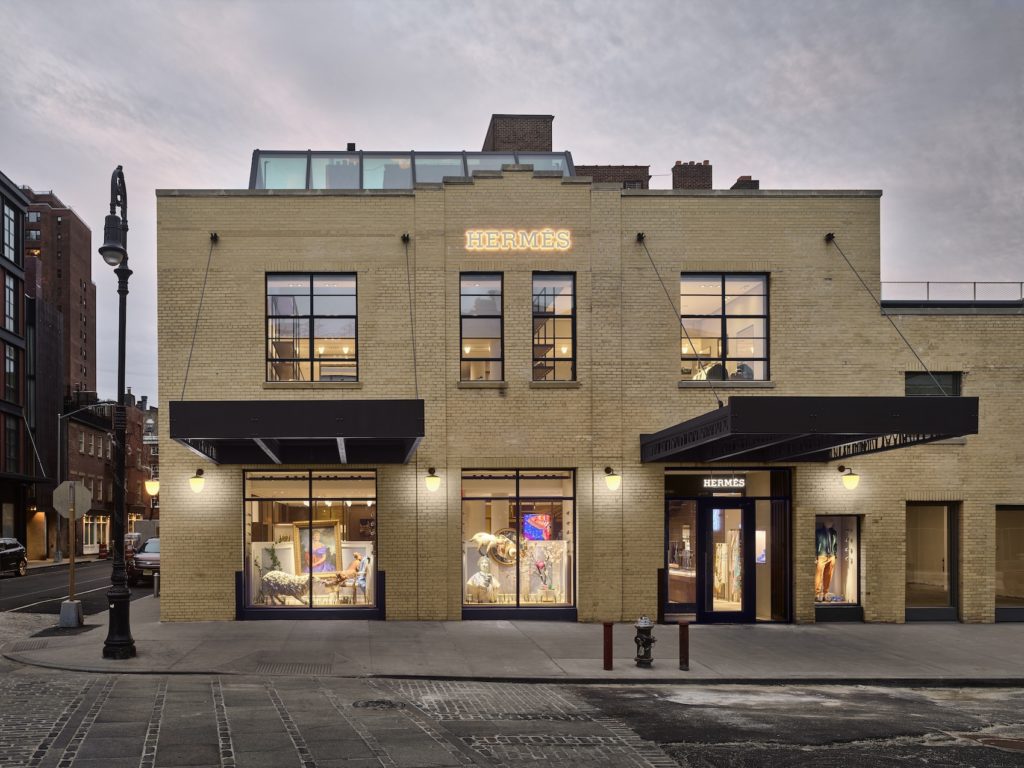 An Hermès West Side Story

By Stephen Watson
Photograph by Frank Oudeman April 09, 2019
Share
Back

“Don’t make something ugly—someone might buy it,” declares Pierre-Alexis Dumas, whimsically quoting Jean Patou about the spare aesthetic inspiration behind New York’s latest Hermès store, in lower Manhattan. The artistic director was visiting New York City along with chief executive officer, Axel Dumas, to welcome visitors to the opening of their 36th Hermès store in the U.S., located on the corner of Gansevoort and Greenwich Street, in New York’s Meatpacking District.

Once a run-down industrial area, full of seedy slaughterhouses supplying local area restaurants, the Meatpacking District slowly morphed into a ’90s nocturnal party playground for the Sex in the City set, later becoming a tourist destination with high-design hotels, curated boutiques, and an Apple Store.

The arrival of the popular High Line greenway, in 2009, transformed the area once again, feeding a steady stream of global visitors into next-level museums, galleries, hotels, shops, and restaurants. A neighborhood that was once desolate and somewhat sinister, the Meatpacking District has now declared itself New York’s newest and most unusual luxury destination.

While paying respect to the character of the neighborhood, all the signs of the Parisian “mothership” can be found: the mosaic tile floor, the Greek patterned ceilings, and overhead light fixtures that reference the flagship Faubourg St. Honore store. Skylights and oversize windows provide an airy vibe (even inside the fitting rooms) giving the 5,330-square-foot store a more relaxed and refreshing vibe. Local landmarks and architecture play an important part in the new space, reflected in the unexpected use of taxicab-yellow ceramic tile, and a dark iron central staircase.

“We always try to create a store in a dialogue with the local community, especially here in the Meatpacking District. It is not just opening a Hermès store—it’s trying to understand the history of this neighborhood and being able to express that in the architecture of the store,” says Dumas.

Smartly sneaker-clad salespeople offer a large selection of wares chosen specifically for the space, with clever conveniences such as a communal bar where shoppers can take a break and recharge, whether simply plugging in a mobile phone or recovering from Himalayan Niloticus crocodile Birkin sticker-shock.

Contemporary art photography fills the store, featuring archival images of objects from the Hermès private museum and a recently acquired Robert Mapplethorpe portrait of the Greek god himself, handsomely welcoming visitors at the front entrance. Hermes was  the conductor of souls into the afterlife. Now, his namesake still serves that purpose—visiting the new space feels just like heaven.