A longtime resident of the city, Patricia Urquiola looked to a midcentury Italian aesthetic for the interior design.

For a city known as a fashion capital, Milan has always suffered from a dearth of high-design hotels worthy of the glamorous visitors who arrive in a stampede of stilettos each season. Of course, there are the five-star palaces shimmering with Calacatta marble and white-gloved butlers, but what of the the street-savvy traveler who seeks a more stylish environment? With the opening of the Room Mate Giulia, architect and designer Patricia Urquiola has filled the void.

The Spanish maven knew exactly what Milan was missing; for the past 30 years, she’s called the Italian metropolis home. Throughout her career, Urquiola has worked alongside great industrial designers—from Achille Castiglioni to Vico Magistretti—but focused more on structural pursuits, and hadn’t found the right project in her hometown on which to affix her name. “Milan has improved a lot in the last few years,” says Urquiola, revered for her Das Stue hotel in Berlin and tropical-mod W Vieques in Puerto Rico. “It’s become more welcoming, the new skyscrapers have given an international aura to the city, and new architectural styles have grown.” Museums like the Fondazione Prada as well as the preeminent furniture fair Salone del Mobile have made the atelier-heavy destination a fixture on the cultural calendar. So recently, Urquiola decided it was time she make her mark on Milan, and the 85-room Room Mate Giulia is her first tribute.

Set in the city center, right by the Duomo, the former bank building delivers a striking visual impact: “severe from the outside, expressive inside,” she says. To hit the right balance, Urquiola researched each decade going back to the 1950s, and teased out vintage design elements that reflect the best of each period. The result is a design vocabulary that is vibrant, buoyant, and essentially Milanese. In the apartment-like guestrooms, for example, the high boiserie
was inspired by old bars that dotted the city, updated with bold tones (“I’m not afraid of colors,” she says). The undulating glass in the side tables and space dividers nod to an aesthetic detail of historic trams. Shelving units in the wardrobes appear to be expensive brass from the 1960s, but are actually made from “tropicalized metal,” an eco-friendly update to a classic piece. Other elements throughout the property—like curved walls, terra-cotta bricks, pink marble floors, and the recurrent geometric patterns—reference Milanese graphic arts dating back to the days when the Duomo itself was first erected. The midcentury-inspired furniture with custom designs includes pieces produced by Cassina, where she’s presently the creative director, and idiosyncratic Moroso armchairs. “The hotel bears the city’s colors, materials, images, irony, and the mix of different languages, yet also its rigor—all in a balanced way,” she says.

Urquiola is quick to praise Room Mate Hotels president and founder Kike Sarasola, who gave the architect carte blanche when designing the space. “They weren’t afraid to make something different,” she says. “It has a personality that is harmonious with the city, and, considering its location, it’s affordable.” When her international friends drop by for a visit, she says, they finally have an unstuffy home away from home, one that gives a perspective of her hometown through her eyes. “It represents my idea of Milan, from the wallpaper to the grid patterns to the local souvenirs that we used in an ironic way.” The mix of old and new, high and low, classic and hyper-modern—Urquiola hopes it will give residents something to wink at, and introduce visitors to a whole new side of Milanese design. 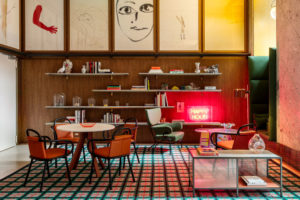