Is The Ned London’s Most Ambitious Hotel Ever?

The Soho House and Sydell Group collaboration has 320,000 square feet of heritage-listed space, including nine restaurants.

It’s 10:30 p.m. in the Grand Banking Hall at The Ned, and cabaret dancers in fringed leotards are doing a jivey dance before a posse of raised iPhones. Behind them, on an elevated stage, a jazz band breaks into “Take the A Train.” Minutes later, the entire room—some 1,500 guests fanned out across the lobby’s nearly 33,000 square feet—erupts into a sing-along of “Hey Jude,” led by choirmaster Gareth Malone, who gives way to English rapper Tinie Tempah. Table dancing, half-full champagne flutes be damned, is in full swing at this point as lithe twentysomethings in skin-tight dresses float around the room: modern-day Daisy Buchanans in a sea of sharply suited Gatsbys.

Surely every night won’t be as louche as opening night was. Then again, The Ned is the most audacious hotel to arrive to London in recent memory. The number of guest rooms clocks in at 252, which is large but nothing out of the ordinary. It’s the rest of the offerings that are staggering: nine restaurants and bars, including a 24-hour brasserie, an Italian joint, and a basement cocktail lounge that’s located inside an original bank vault and lined with more than 3,000 stainless-steel safe-deposit boxes. There are also six meeting and events spaces and two pools, one of which is situated on the rooftop and lined with marble, plus a spa, a Cheeky nail salon, a Neville barber shop, a Moroccan-style hammam, a boxing gym, a spin studio, a full gym, and more, all within 320,000 square feet of total space. 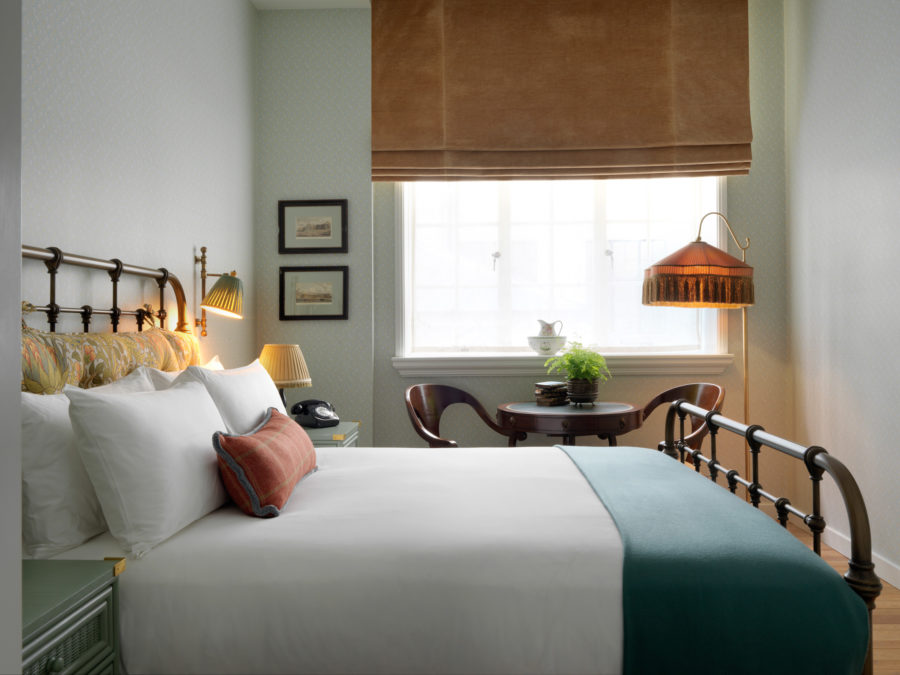 7
Slideshow
Inside The Ned
A guest room. …

The property, which was developed after billionaire investor Ron Burkle introduced Andrew Zobler—founder and CEO of Sydell Group (the developer behind brands like The Nomad, The Line, and Freehand)—to Soho House founder and CEO Nick Jones, pays due respect to its setting, the former Midland Bank building, designed by Sir Edwin “Ned” Lutyens in 1924. Nearly a century later, a Grade I listed status has protected the interior’s most magnificent elements, including the 92 African verdite-clad columns punctuating the lobby. Furnishings nod to those original details—a wisp of tufted velvet here, a whoosh of nailhead there, an art deco light fixture overhead—and help create the sort of sexy boîte that The City, as London’s financial district is known, has long been missing. Although the amenities floors are reserved for The Ned members and hotel guests, most of the restaurants and bars are open to the public, and the 850 seats on the ground floor are destined to draw an after-work crowd eager to sip “Nedgronis” long into the night.

As for the rooms, they’re quiet and comfortable, with the signature Soho House vintage aesthetic—silk-tassel lampshades, 1920s-style floral wallpaper—and more varieties of toiletries (all Cowshed, the brand’s bath-and-body line) than I’ve ever seen. There were a couple of opening hiccups—one night, for instance, the lights in my room simply wouldn’t turn off—but the front desk staff resolved them with graciousness. Besides, in an urban resort with a fulsome entertainment menu, why bother to turn in at all? Rates start at $280 per night; thened.com.