The Portuguese artist inscribes her identity into six signature Roche Bobois pieces, including a remarkable rendition of the Mah Jong sofa.

In 1971, Hans Hopfer introduced the forward-looking Mah Jong sofa for Roche Bobois as an ode to function and form. The premise was simple: with near-infinite configurations, people will have the freedom to rearrange their living spaces as they see fit. Now, almost 50 years after its debut, the French design staple has undergone a dramatic transformation at the hands of Portuguese artist Joana Vasconcelos, who uses such handicraft techniques as embroidery and crochet to create vibrant large-scale sculptures that comment on cultural identity and feminism. And in the reimagined Mah Jong, her careful treatment of identity is clear: The sofa’s recognizable square cushions retain their DNA, but Vasconcelos wove in a fantastically sculptural dimension that rethinks its entire look and feel.

“I’ve been doing a line of tri-dimensional paintings that simultaneously show a pictorial and sculptural object,” says Vasconcelos, who applied this idea to Mah Jong. Woven onto each polyester cushion is a custom black-stripe crocheted pouf that Vasconcelos crafted in the same language as her Crochet Paintings series, in which artful arrays of her cushions are affixed to a wooden canvas. Now, with her touch, the sofa takes on that role. “Each module functions as a canvas for people to sit,” says Vasconcelos, a self-described Baroque artist who invites viewers to freely engage with each piece. The sofa, along with five other reimagined Roche Bobois pieces, will preside over the outdoor terrace of Miami’s Pérez Art Museum until December 5 during Art Basel.

The end goal, Vasconcelos says, is to shed light on how we interact with everyday objects—and perhaps even find a new favorite sitting position. “Each square offers a separate space and experience.” She notes how her 60-person studio, located atop a former cereal factory warehouse in Lisbon, experimented with a range of ergonomic configurations to come up with the final arrangements. “The crocheted cushions, which are added to the squares, determine the way you sit. On some, you sit straighter, while on others you can lean more back. The purple square provides a different sitting experience from the pink one, and so on.”

It’s not the first time Roche Bobois has enlisted a globally renowned artist to reimagine the sofa. Before Vasconcelos, couturiers Jean Paul Gaultier and Kenzo Takada offered their own signature spin—the latter channeled Japanese symbolism into Mah Jong using three colors of jacquard fabric that symbolize morning, afternoon, and evening. And at the celebratory cocktail event, a brand spokesperson hinted at another collaboration brewing to toast the sofa’s 50th anniversary, but details are under wraps. 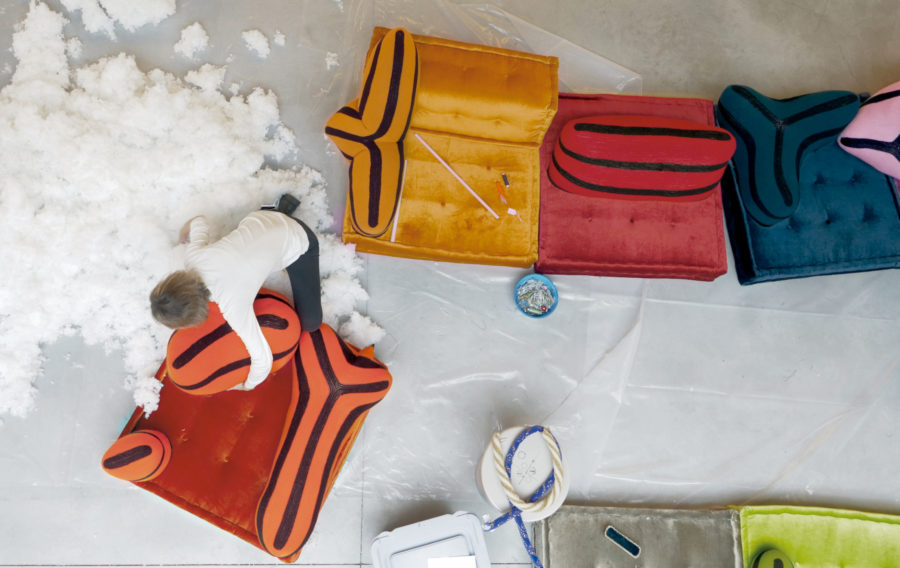 Vasconcelos first unveiled her Mah Jong in May during Arco, the contemporary art fair in Lisbon, before they traveled to Roche Bobois showrooms in Geneva and Paris. After its run at Art Basel, the sofa along with six other reimagined Roche Bobois pieces will be auctioned to benefit the Joana Vasconcelos Foundation, which the artist founded to support and empower creative talent.

Designer of the Day: Morghen Studio

Designer of the Day: Eric Roinestad

Designer of the Day: Kieu Tran

Here’s What Wowed at Supersalone

Designer of the Day: Marcin Rusak

Design Miami/ Returns to Basel With a Roster of...