Joe Ginsberg Has an Edge

The Manhattan-based interior designer talks about his many sources of inspiration.

Artist, designer, furniture maker—New York-based Joe Ginsberg possesses a toolbox of multidisciplinary skills. Here, he talks about creative process and his most recent project, the Marmara Park Hotel in Manhattan.

When you revisit a finished project, do you ever see it again and wish you’d done something different?

In regards to the design, no. The only issue I ever have is either the way it’s maintained or the way the public is living with it. The same way I create a canvas. I’m a painter and sculptor. [Design] is a canvas for me.

Do you stay involved after a project is finished?

I’m always involved, yes. That’s something they realize, “We have bring Joe back to keep up with the original sense of it.” They’re also pressured to keep the property pristine and at the level of the first intent.

Tell me about your inspiration for Marmara Park.

I was inspired by the desert and Africa. The sand, the golden hues, reds, ambers, and the light of day really inspired me, but keeping it a very pristine, luminous, and modern space. I was in Namibia, and that gave me the “ummph.” … I was conscientious of the city, and [how] walking through the vestibule at the entrance [felt like] bringing the outside in. In other words, this was about the street and nature. It’s like a garden—to go into this oasis and its luminescent feel.

How much did brand identity play into the design?

It didn’t, though it’s an undercurrent. One pattern, for instance, could be an arabesque, but it was really about the king and the queen. So my illustration and my graphics came from my painting of the king and queen and formed into this. You may relate it to a Turkish emblem, but it didn’t come from that. For me it was about a universal, international edge. For the international traveler, for someone who is looking for an oasis away from home, to feel transported. In the elements and architectural detail this plays [out in] a bronze to a steel to a faceted glass, a cast limestone. Having some of humor here and there, such as having the peg leg on the desk. The single peg leg offered a pirate attitude.

Did you have a certain kind of type of guest in mind while designing the hotel?

It’s all the same to me. You can have the single traveler, the family, the person who wants one night away or to stay long-term. 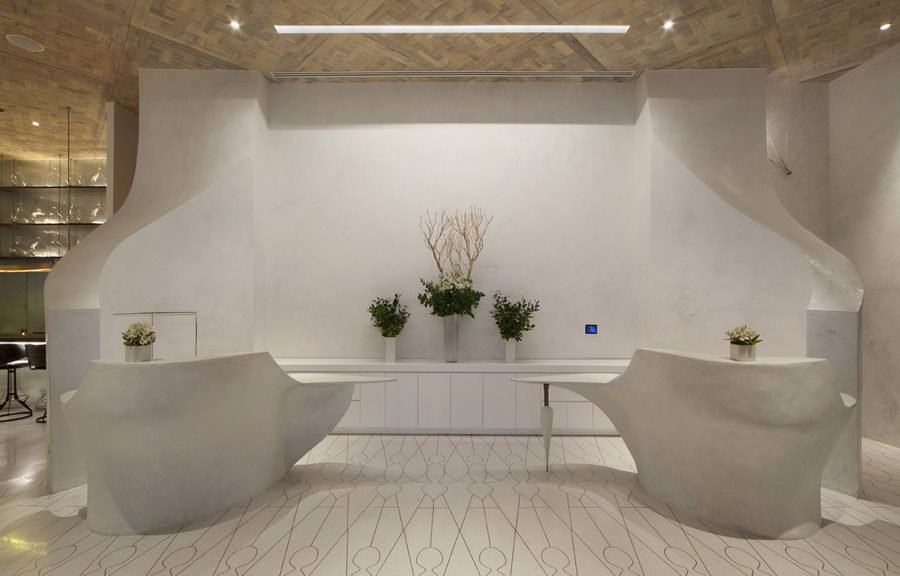 3
Slideshow
Inside the Marmara Park Hotel
…

You weren’t thinking about the identity?

No. I grew up here. We’ve been influenced by every element from old school and old world to the new hip—whatever that is—and nightlife, which I’ve been involved in for a long time. [It’s meant to be] a comfort zone for the grandmother waiting for her kids to check in, to be comfortable here on a Sunday morning or Thursday night after the club, having dinner, coming in to relax, or from the airport wanting to have a drink before you get your room.

What was your vision for the social spaces?

A feeling of tranquility, but I can’t control the activity. I can only give it the foundation and the backdrop. One of the first things I started was the library. This space was also about books and about reading: coming in and having a drink and feeling the culture of either New York, or wherever you’re about to do business with. Tt’s a business center. Intelligent reflection is why the library is important to me, being able to have your solitude.

Would you say that you have a certain style?

I wouldn’t use those words, because each client inspires me. I have to be well-versed within all the periods, from traditional to contemporary to cutting-edge contemporary. I span various styles and I need to be able to jump and switch on a dime when it’s appropriate.

Do you enjoy doing private residences or hospitality projects more?

I enjoy creating new work, that’s my thing. Of course, a hotel gives you a platform to expand on many different aspects because I’m thinking of the world traveler, whereas for a private residence, I really have to zone in on the [client’s] needs.

Is there a designer or artist in the industry that you’re a fan of?

Picasso. Or it could be Martha Graham or it could be Constantin Brancusi. I take different senses for my inspiration. The street, nature, or a leaf.

There’s a vibe. I grew up in Manhattan, and the sense of cities is constantly changing—the vibe, the energy—but nature is critical.

What was your approach to Marmara Park and to design in general?

Everything [starts] with a pencil drawing, every aspect of the hotel, from knobs and handles to desks and the vestibule. Then I paint it and start fabrication. The materials I work with are Old World, but I bring them into my twist, my kind of sense and edge, to say something new. It’s for the ages, not a fad.