New to Mumbai, The Legendary Gem Palace Keeps Up Its Gleaming Mystique

A family affair for 16 decades, the historically Jaipur-based Gem Palace has followed its current heir to a Mumbai flagship that's worthy of its regal allure.

A family affair for 16 decades, the historically Jaipur-based Gem Palace has followed its current heir to a Mumbai flagship that's worthy of its regal allure.

The striking Dhanraj Mahal in Mumbai’s historic Colaba district is hard to miss—beneath its majestic art deco eaves is a Bentley showroom and a perpetually packed Le Pain Quotidien. What is easy to overlook, however, is an emerald awning discreetly tucked away in an inner corridor of the complex. This is where Siddharth Kasliwal, scion of Jaipur’s venerable Gem Palace (the illustrious jewelry store has been in his family since 1852), recently unveiled his Mumbai flagship.

“I wanted to do something bold and different,” Kasliwal says. Despite the understated threshold, it swiftly becomes evident that the new space lives up to his vision. Even for a country that’s generous with its use of splashy colors—the late Vogue editor Diana Vreeland famously observed that pink is the navy blue of India—the contrast of lush green with vivid salmon in the cozy showroom is an unlikely choice. Kasliwal has Jaipur-based Dutch designer Marie-Anne Oudejans to thank for that kicky pairing.

“I work with a lot with colors,” says Oudejans, though that much is evident from her work at Gem Palace. “I love to mix traditions—Indian things and European things.” Kasliwal was a fan of the Tocca designer’s interiors at Jaipur’s Bar Palladio, where she had seamlessly blended classical Indian palace architecture with an eye-catching electric blue palette. “Siddharth told me to create an incredible world, and that the store should be an experience.”

With that directive, Oudejans set to work putting together mood boards of sumptuous pinks and greens for the main salon, and airy yellows and blues in the “VVVIP” suite upstairs (more on that soon). The lower level is swathed almost entirely in plush fabrics, covering the couches, cases, and walls, a vibrant contrast to the black-and-white checkerboard floors. With Oudejan’s clever use of secret passages, mirrors, and hidden cabinets, an otherwise petite space feels much larger. “I wanted a bit of a James Bond feeling with the display cases. You never see any handles anywhere,” she says. “Sometimes in an old palace you have no idea if there’s a door or not, but you push on a wall and it opens. That was what I was going for. It’s a little mysterious.” 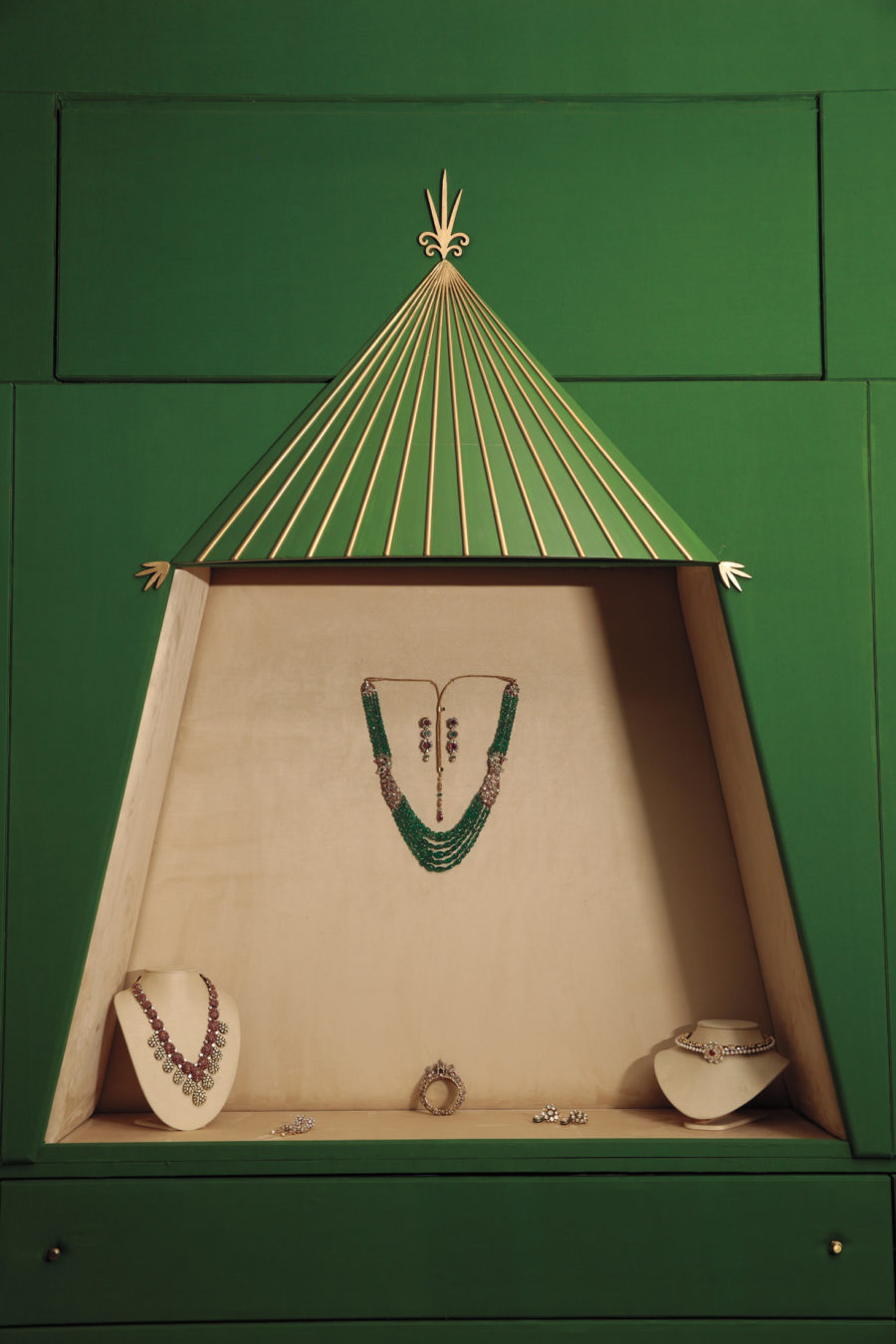 One of Gem Palace’s many mysteries lies behind two ornately painted panels laden with old-world landscape imagery, bringing to mind frescoes excavated from an Italian palazzo. Downstairs, the merely wealthy browse couture belts, cuffs, and necklaces glittering with untold carats of diamonds, emeralds, and pearls. But for Gem Palace’s super-fabulous clientele, a gentle push on the panels reveals a secret stairwell, leading to a private lair that’s off-limits to the uninitiated. This is where Kasliwal himself entertains his most well-heeled customers—if downstairs is the millionaire’s lair, this is where the billionaires browse.

“I wanted upstairs to be about Sid, a maharaja suite for him—very comfortable and not too heavy,” Oudejans recalls. So she went with pastel tones, powder blue enlivened with cheery yellow accents. The walls are lined with arched, painted niches, and the daybeds have tent-like canopies, evoking a more traditional Rajasthan—but the colors and boldly patterned ceilings add a distinctly modern flair.

“It’s not only about the jewels, but about the heritage,” she says. “It’s a little bit of a treasure box.”