A pioneer of New Nordic cuisine, Danish chef Mads Refslund may be best recognized as the cofounder of Noma, in Copenhagen. The restaurant, which opened in 2003, went on to garner two Michelin stars and become a four-time topper of The World’s 50 Best Restaurants list. Shortly after Noma’s inception, he opened his own establishment, MR, which also won a Michelin star. Established as an industry name, he desired a greater challenge. The next logical step? A move to New York.

Upon his stateside arrival in 2011, culture shock hit hard. It wasn’t because the population was seven times larger than Copenhagen’s, nor was it from the language difference or the relative efficiency of public transportation. He was shocked by the amount of food waste in America.

Rightfully so: The single most abundant component of municipal landfill waste in the U.S. is discarded food, as reported by the Environmental Protection Agency. Food is not only discarded from consumers, but from farmers and suppliers as well. Much of the waste occurs upstream in the farm-to-fork pipeline; farmers sacrifice an estimated 10 million tons of food crop before it ever gets shipped out to grocery stores, according to a 2016 report by Rethink Food Waste. American consumers are accustomed to cosmetically flawless produce, and food they know how to cook.

Fish cheeks, considered a delicacy in Asian cultures, are scrapped because a filet is more desirable, for example. Beet bulbs are much easier to handle with the stems and leaves removed. Carrots are whittled into lunchbox-sized nubs, de-greened, and sealed in plastic bags. 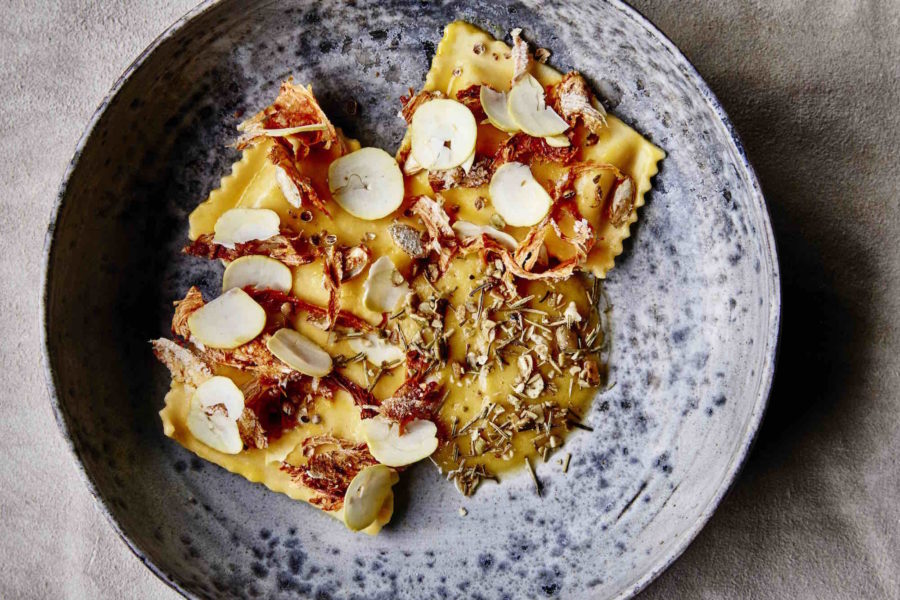 Though demand dictates supply, Refslund doesn’t blame consumers. It’s the chef’s responsibility to educate, he insists. “The consumer visits restaurants, watches Netflix or Food Network, sees these [food movements] happening, and they’ll start to ask for change,” he says. Encouraged by this, Refslund is working to create a paradigm shift.

Last March, he released his first book, Scraps, Wilts, and Weeds: Turning Wasted Food Into Plenty (Hachette Book Group), coauthored by Tama Matsuoka Wong. It’s filled with a light dose of food-waste education; tips on preparing and preserving all parts of vegetables; and recipes for cabbage-core risotto, fennel-stalk pesto, and more. For Refslund, this kind of resourcefulness is simply part of his cultural heritage. It’s also at the heart of the New Nordic cuisine New York has been cult-crazy about in recent years. It’s a trend Refslund himself helped ignite during his tenure at the NoHo restaurant Acme, from 2012 to 2016.

Nordic cuisine isn’t so much about the ingredients, but rather where they came from. As Refslund elaborates on in his book, elements of a dish should be grown or foraged locally and used in their entirety whenever possible. With this approach, Refslund is planning to open his first restaurant in Brooklyn next Spring, which is later than he’d hoped. “It’s important to find the very best ingredients… when I came here, I didn’t have the resources or the right farmers around me.”

Of course, basic-level information on vendors is just a click away online, but that’s not what Refslund is looking for. “I need to know the farmer, shake his hand, look him in the eyes, and say to him ‘I need the best things you can grow, fish, or farm for me,’” he says, with his trademark no-nonsense stare.

Still untitled, the restaurant will be based on the concept of “fire and ice” (a reference to primitive cooking tools), employ more cooks than servers, and will inhabit the site of the old Vice offices in the borough’s Williamsburg neighborhood. Above all, it will educate diners—through their palates—about how delicious simple, low-waste, locally sourced food can be. But this is only step one in transforming the food industry.

“We are on the right track, and I have to believe in this movement,” Refslund says. “No matter what, I will try my complete best to commit to it.