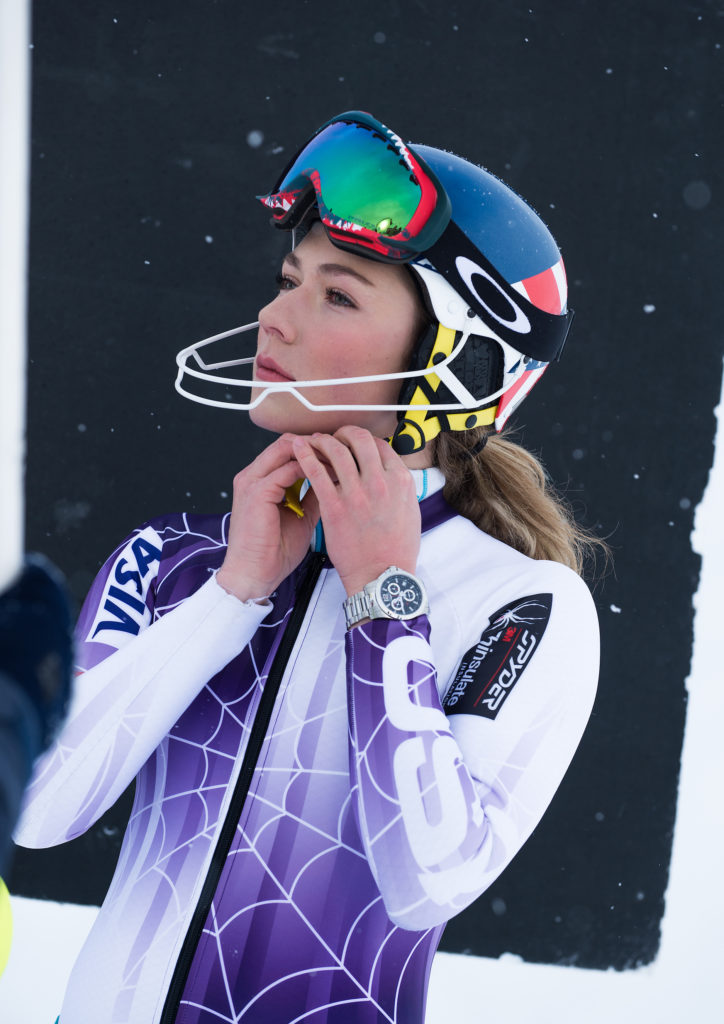 “I’m not a very adventurous person,” says Mikaela Shiffrin. “But I’ve found a lot of adventure in skiing—that’s for sure. I’ve also found structure in it.” The humble slalom star has also found an unprecedented level of success.

At only 24, Shiffrin is already the winning-est World Cup champion skier ever, with 17 titles in a single season, the most ever achieved by an individual. On her way to those staggering numbers, she has traversed mountains, continents, and expectations. It has proven to be a level of achievement, and a life, that has attracted Longines, which tapped the American to be as its first Ambassador of Elegance for the storied brand in 2014.

The relationship between Longines and skiing is not new. Longines’s debut effort in alpine ski timekeeping came about in 1948 at Austria’s Arlberg-Kandahar race. Fast-forward to today and the Swiss watchmaker remains the official timekeeper of the International Ski Federation (FIS), Alpine Ski World Cup, and the FIS Alpine World Ski Championships.

About the match, Shiffrin says, “It was one of the first [opportunities where] I felt like, ‘Wow, I’m actually branching outside of my sport a little bit.’ And it means that I’m developing—not only as an athlete, but also as a personality in my sport.” She adds, “It was exciting to work with a brand that’s so well respected and values the same things I do: precision, conducting yourself in an elegant way, excellence, and always striving to be on the cutting edge of whatever it is you do. I felt like if they could see those values in me, and they wanted to align, then I must be doing something right.”

Shiffrin’s off-the-cuff candor is quite comes off as quite the understatement, considering that she has 60 World Cup wins under her belt and won the Gold Medal in giant slalom at the 2018 Winter Olympics in PyeongChang, South Korea. But this is a champion who is refreshingly cognizant of and transparent about her privileges, and just how integral they’ve been to her successes.

“[Success is] also about opportunity,” Shiffrin says. “There might be somebody out there who’s much better suited for this sport than I am, or than anybody else ever has been. It’s the argument of nature versus nurture, and I think nurture is a huge component.” Shiffrin, who grew up in both Colorado and New Hampshire, adds, “To be honest, if I was born into a different family, with different parents with a different lifestyle, I don’t think that I would be a ski racer. I’ve had a lot of opportunities through my family, through my parents, through where we lived, and the coaches that I came into contact with and was able to work with, throughout my career, from the beginning. A lot of that just kept propelling me forward.”

And that very inertia has yet to cease. To that end, Shiffrin has imbued her Conquest Chronograph with her personal brand of sincere effervescence, and has aestheticized the timepiece as such: Its blue aventurine dial benefits from an opalescent effect meant to mimic the snow Shiffrin so often shreds, while the chronograph’s flange and hands reference Team U.S.A.-red. The piece marks the aventurine dial debut for the 187-year-old watchmaker, just as it marks Shiffrin’s first foray into luxury accessories.

Rigidity and discipline are attributes shared between athletes and watchmakers alike. Intimidating to some. But it’s something Shiffrin relishes and, perhaps, is part of what makes her and Longines a match made in timepiece heaven.

“It’s a sport that takes me around the world—we go to new, exciting, crazy places,” Shiffrin admits. “But in the sport itself, there’s so much discipline and structure—racing, the feeling of improving, and the tangibility of time. I feel like that’s the thing I thrive off the most.”