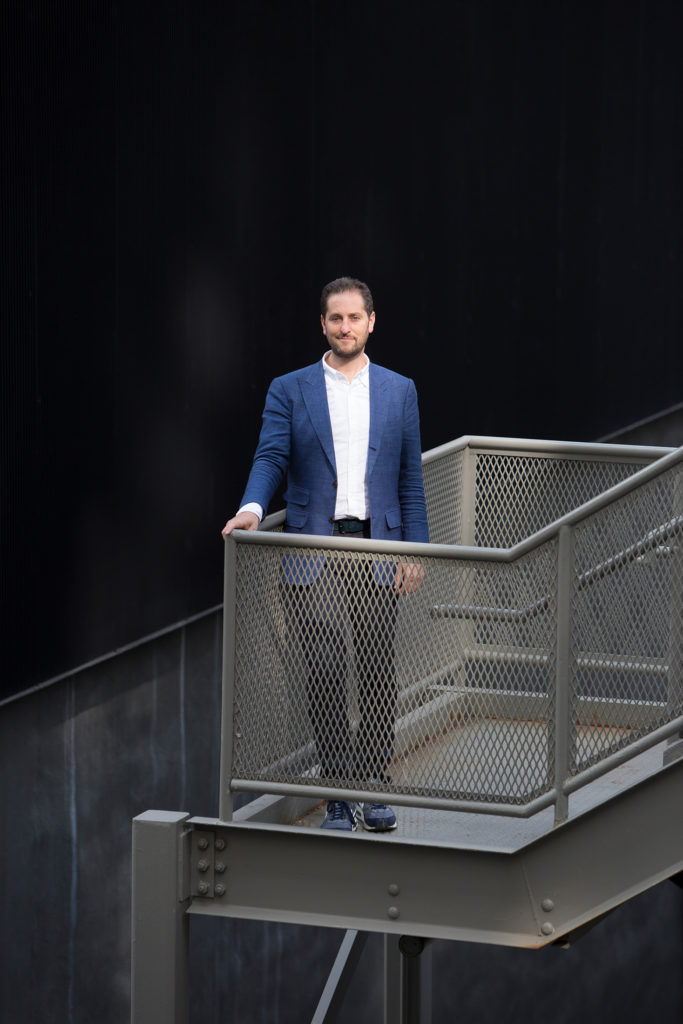 As the director of Art Basel Americas, which includes the Miami Beach fair, Noah Horowitz is on a mission to expand the organization's horizons, cultivating the arts in none of the usual places.

By Rachel Small
Portrait by Scott Burry November 21, 2016
Share
Back

As the director of Art Basel Americas, which includes the Miami Beach fair, Noah Horowitz is on a mission to expand the organization's horizons, cultivating the arts in none of the usual places.

It’s not easy to get a read on Noah Horowitz.

I think he likes it that way.

Last year, after three years at the helm of The Armory Show, during which he imbued the historic, once-stale New York fair with a welcome burst of energy, Art Basel named him director of the Americas, which puts him in charge of Art Basel Miami Beach. He’s polite and exudes an air of calm neutrality, which is the only approach a person in his position can safely take when dealing with the torrent of egos that coalesce around art fairs, particularly the one he currently oversees.

Once the main attraction is underway on Dec. 1, the art-fair-going public will be greeted with handshakes, smiles, and measured responses to questions. True, it’s a civilized facade for the frenzied, highbrow spectacle that is contemporary art collecting. But Horowitz has a deep understanding and appreciation of both the monetary and cultural value of art as, well, two sides of the same coin. His 2011 book, Art of the Deal, offers a meticulous take on the numbers to explain the fluctuations—and, particularly, the astronomical growth—of the contemporary market in the aughts. Toward the beginning is a quote from 20th century art dealer Leo Castelli that ascribes the value of art to its “myth.” His job, then, was “myth-making.”

This year marks Art Basel Miami Beach’s 15th anniversary—round two for Horowitz, who has been busy building out his ranks with a new office in New York that opened this fall. He’s been traveling nonstop, and he stresses his efforts on outreach to regions that are less connected to the international art world: In the United States, his focus is between the coasts, in places like Chicago and Milwaukee, and he is beginning to get a sense of the potential within Central and South America. In seeking out latent art scenes, as well as prospective collectors, he is also feeling out options for Art Basel Cities, a global initiative launched last March that will aim to create international programs that eschew the art fair format. The first, it was revealed in September, will be Buenos Aires; the announcement, scant with details, emphasized that the results will be “mutually enriching” for the city and the international art scene.

When we met in Manhattan in late August, Horowitz had just touched down in New York. The following week, he headed to São Paulo for the opening of its biennial, and then flew to Buenos Aires. A week earlier, he had been at the fair’s global summit week, in which the teams behind Art Basel in Switzerland, Hong Kong, and Miami—about 70 employees total, which is a marvel given their scope—gather, “without all of the distractions from other times in the year,” he says. It’s no revelation that Horowitz has plenty to occupy his mind. But it’s simpler, sometimes, to lock all that away to focus on a task at hand. Like an interview.

The Miami team and the teams for Hong Kong and Basel work closely and share resources.  How is your process for Miami different?

How does Art Basel Cities fall into this?

Basically, up until now, people’s understanding of Art Basel is that it produces the greatest art fairs. Art Basel Cities will create these art weeks in different cities and regions where we’re not currently producing shows, [with the aim of having some] cultural production or dialogue that happens outside of the fairs.

It sounds like a good way to get feelers out to any given locale, to connect with potential collectors, and also to discover new, smaller art scenes.

I think that it does a number of things. For us, and it’s where crowd funding comes in as well, it’s about looking at opportunities that exist outside the mere production of trade fairs for art, but where we have the competence. In this case, we feel that we have the resources to work with other cities to produce meaningful cultural engagements in any number of ways. The example of crowdfunding is how we can leverage our scope and our network to help support not-for-profit cultural institutions that don’t have a natural, obvious place within the halls of our shows. That’s allowed us to direct resources to more than 40 institutions throughout the world.

Have you received any misdirected attention because of the name of your book in recent months?

I was just curious. Please continue.

I think one of the reasons I’m thrilled about being part of the organization is that it understands these things implicitly. The crowdfunding initiative, again, is a great example of that. We support galleries at all levels of the market. A different iteration of it is our Global Patrons Council, [a group of] collectors in different areas of the world who we want to be part of our network. We don’t want it to be a mirror image of the top 200 collectors list, or who-spent-the-most-in-the-last-12-months list. They are philanthropists, who uphold solid business practices, and support galleries and institutions. They make the whole thing go round. I think that, as a lens into understanding what we do as an organization, is very pointed.

What are some major themes that a more mainstream businessperson—that is, for instance, someone coming from a corporate side, who has no reason to engage with creative communities—would never guess about the art world?

Within the market, predominantly at auctions, there is a fairly narrow caliber of art being presented. At our shows, there are thousands of artists on view, everybody has a voice. For the business community, we try to push forward [the idea] that art is much more than painting. One of the other things that’s important to understand is the role that museums, biennials, and public exhibition programs play, not only in getting the word out, but also [in giving direction to] artists.

Yeah. What a museum chooses to collect can influence the market. People on the board will vie for an artist that they’d like to see in the programming or permanent collection.

I think that also differs a lot from one institution to the next.

In Miami, the city’s museums all put on big shows during Basel. Do you have relationships with them?

That’s an aspect of my job, to build relationships and to represent Art Basel in communities. So, when I’m in Miami, I’m checking in to see Franklin Sirmans at the Pérez Art Museum, or Alex Gartenfeld and Ellen Salpeter at the Institute of Contemporary Art, and Silvia Cubiñá at the Bass. [We meet] just to compare notes. The earlier we know what they’re planning, the better we can adjust our own events and programming in response to it.

There has been some recent flooding in Miami Beach, and even though the threat seems overblown, there’s a lot of concern about Zika. Do you have plans to address those issues?

Clearly our audiences are asking questions about it. We’re in regular contact with the mayor’s office and the health authorities to understand what the implications are for our show and all the people coming in early December. We’re monitoring it closely.

What’s the most interesting part of every cycle for you?

I love working with our committees. I enjoy that selection process a lot. This year, we have 12 new exhibitors in the Galleries sector [the central and largest component of the fair]. We had four last year, and there’s a 98 percent reapplication rate. We’re also in the midst of this long-term renovation project with the Miami Beach Convention Center, which kicked off as soon as last year’s show closed. The new facility will be opened and inaugurated in its entirety in 2018. Next year, we unlock an entirely new design and layout to the show. It’s exciting because it will give a new look and feel to the identity of Art Basel Miami Beach from the inside. Long-term planning is something else that we spend a huge amount of time on. The fruits of that labor won’t be visible this year, but they certainly will be in the future.

Alex Prager Is In A League of Her Own