Art of the Restaurant Interior

Singapore's Odette channels the creative spirit of its gallery-filled surroundings. 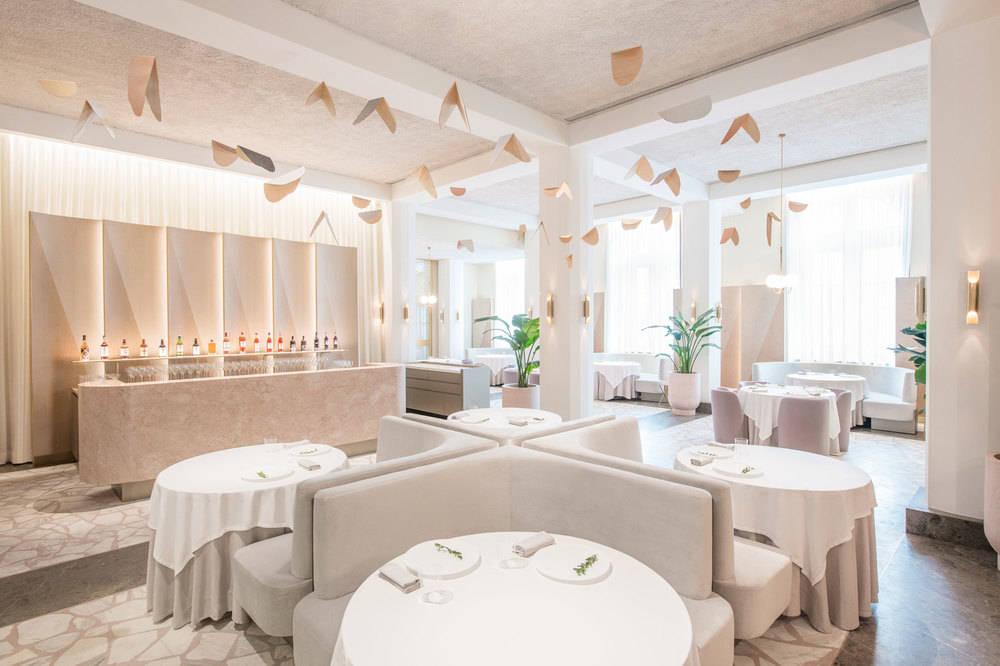 When Singapore decided to create a world-class art museum within two historic buildings, the former Supreme Court and City Hall, it was determined that almost half of the four-story complex would be dedicated to food-and-beverage outlets. That proved something that most locals already know: In this major Southeast Asian hub, food is considered a fine art.

The competition for space in the Studio Milou–designed National Gallery was formidable: Restaurateurs and chefs were required to submit extensive concepts and plans during the application process. To be chosen was an honor; the goal was to showcase not just the world’s largest collection of South Asian works, but also the city’s top gastronomes. Enter celebrated chef Julien Royer, who came to the country by way of France, and his backers, the well-respected Lo & Behold Group. Their restaurant, Odette, named after Royer’s grandmother, was given a prime area on the ground floor, and London-based firm Universal Design Studio was tapped to design it.

The intimate jewel box of a space has only 32 seats; stepping through its arched doors is like entering an ethereal blush-colored shell. Universal’s Jason Holley, whose résumé includes the interiors of London’s Ace Hotel and Stella McCartney boutiques, says the firm had several starting points when conceiving Odette’s interiors.

First, they considered the context of the buildings, constructed in the 1930s in a classical colonial-era style with a marble facade and lots of Corinthian columns. “We wanted to refer to some of the historical details, not copy them,” Holley says. “When we first started researching, we became drawn to the idea that it was a very crafted building in the sense that it was created by many craftsmen. We felt the interiors of the restaurant should feel that same way.”

The space is highlighted by modern faceted columns, a pink terrazzo bar, glass-encased kitchen, and white marble floors cracked and filled with light pink grouting. “The juxtaposition of the fine texture of the marble with the cracks gave it a modern roughness,” Holley says. On the whole, both the designer and chef wanted to keep the aesthetic light, playful, and elegant. Hometown artist Dawn Ng created a dramatic mobile as the centerpiece, taking the ingredients that Royer employs in his dishes and reimagining them as floating abstract shapes. In fact, Royer’s culinary themes inspired the overall design vision.

“It was seamless,” Holley says. “How he constructs his dishes is very much how we construct a space. It’s about understanding and respecting materials, their integrity and purity, but then transforming them into incredible creations.”

Odette is named in tribute to my grandmother, who taught me that some of the most remarkable dishes can come from the simplest ingredients. This ethos has directed every aspect of the Odette brand—focusing on the fundamentals and applying the utmost care to every detail. Our creative director is Singaporean artist Dawn Ng; together, we spent months in the kitchen, where she meticulously documented our processes and ingredients.

A focal point of Odette is an installation above the quadruple banquette, which was painstakingly hand cut from oak, polyfoam, brass, and paper. This is a part of Ng’s “A Theory of Everything,” a collection of abstract collages crafted from a series of deconstructed food photography, which reveals the textures and patterns of ingredients such as truffles and scallop shells. Universal Design Studios also directly mirrored this approach in the design of the space, by using natural, raw elements that communicate warmth and comfort, all while respecting its historic and iconic location within the National Gallery.

The Forest of Forgotten Vegetables aims to showcase autumn root vegetables that are typically overlooked, in a simple yet comforting dish that highlights the differing textures and flavors of each component. Similarly, this signifies the coming together of creative sensibilities in the collaborative making of Odette.