At Tate Modern, Olafur Eliasson’s Vision of a Sustainable Future

The impact of Olafur Eliasson’s remarkable body of work becomes clearer as the climate crisis intensifies. An extensive mid-career survey at London’s Tate Modern sheds light on how the prolific Icelandic artist is addressing today’s most urgent environmental issues—and inspiring us to follow suit.

Olafur Eliasson plays with how we perceive and interact with our surroundings—a result of the Icelandic artist’s research into complex geometry, motion patterns, and color theory. Recently, such conversations have been inextricably linked with the climate crisis. “I don’t want to use a fear-based narrative, but we’re living in a climate emergency,” Eliasson recently told Artnet News. The artist leverages that activist motive to underscore his monumental mid-career survey, “In Real Life,” at the Tate Modern in London.

The exhibition invites viewers to contemplate our collective carbon footprint through 40 interactive works that span more than three decades of his career. It makes sense that “In Real Life” closely follows “Ice Watch London,” in which he installed a series of centuries-old ice blocks from Greenland in the Tate Modern’s courtyard so visitors could experience the freshness of earth’s air before it was adulterated with CO2. “We have to emotionalize data and make it physically tangible,” he said shortly after the installation. It’s a noble gesture at a time when climatic concerns dominate headlines, but have been slow to provoke widespread action.

Nearly every work illustrates this urgency. Beauty, one of Eliasson’s earliest achievements and one of the first encountered in the exhibition, features a punctured hose that sprays a curtain of fine mist from the ceiling of a darkened chamber. From certain perspectives, a rainbow appears within the falling water, shifting in intensity as the viewer moves away. Meanwhile, Your Blind Passenger, a tunnel shrouded in dense yellow fog, severely hampers visibility. It’s a dystopian portrait of a future in urban environments should we fail to reduce air pollution—a grim reality that already afflicts China, where pollution from coal and biomass burning has reduced the effectiveness of solar panels and upended day-to-day life for the country’s citizens.

Of course, it wouldn’t be an Eliasson survey without large-scale light works that dole out mesmerizing visual experiences. Three works in particular offer temporary reprieve from the dour theme of the show. Your Spiral View immerses viewers in a dizzying, kaleidoscopic tunnel of mirrored steel plates that reflects fragments of space. Your Uncertain Shadow casts colorful, lifelike silhouettes onto blank walls. Stardust Particle is a hanging chandelier-like sculpture that changes appearance as its filter glass playfully reflects light onto surrounding walls. (Surface visited Eliasson’s studio in April, when he was finalizing production of Stardust Particle and other works in the show. Get a behind-the-scenes look below.) 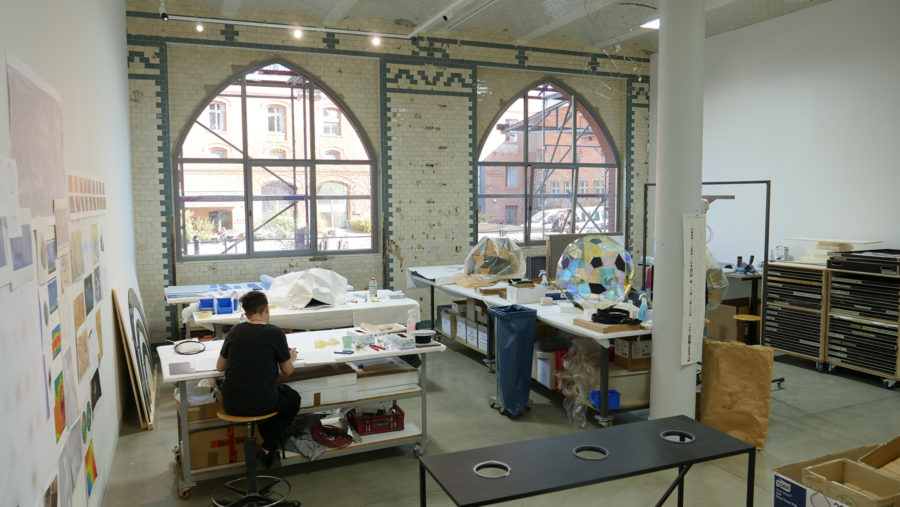 “In Real Life” also ventures beyond artwork. One of the most fascinating components is a vegetarian kitchen, adapted straight from Eliasson’s studio in Berlin, that will take up residency in the museum for the duration of the show. Victoria Elíasdóttir, his sister and a professional chef of Scandinavian cuisine, established the in-studio kitchen to provide Eliasson’s 100-plus assistants with organic, locally sourced meals four times a week—as well as a midday salon that includes lectures by renowned artists and scientists. The vegetarian menu, Eliasson notes, “empowers [us] to understand that eating isn’t just about passively consuming.” His OE Quasi pendants, designed for Danish legacy brand Louis Poulsen, hang above communal wooden tables, recreating the dining experience in his studio with near-mathematical precision.

In a recent interview with Surface, Eliasson explained that he “subscribes to the necessity of re-humanizing space”—a statement that invites a diversity of interpretations, but perhaps that’s the point. The experiences dreamed up by Eliasson have the power to overhaul modes of thinking about the climate crisis, but they also offer passive amusement by means of mesmerizing light and shadow play. Both are necessary for his work to resonate. Regardless of how one approaches “In Real Life,” Eliasson’s raison d’être is clear: “I’m carefully following more sustainable ways of coexisting on earth.”