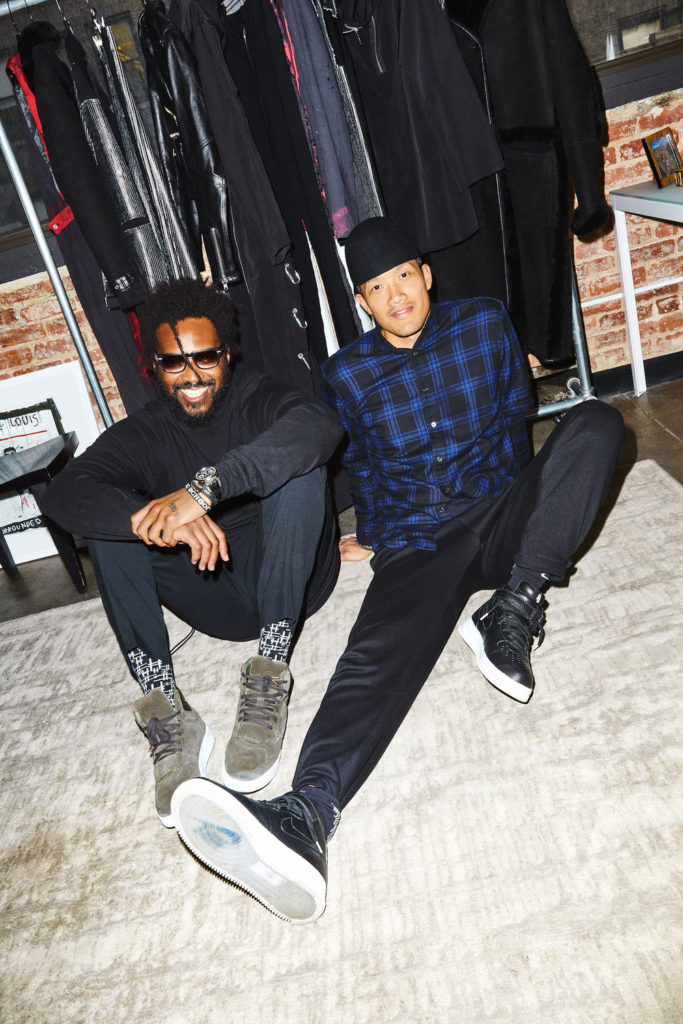 Strategic decisions made by the duo at fashion label public school have increased their velocity of business.

Strategic decisions made by the duo at fashion label public school have increased their velocity of business.

Maxwell Osborne has taken 6,300 steps, and it’s only 1 p.m. He and business partner Dao-Yi Chow have just wrapped up a high-energy women’s runway show at New York Fashion Week for Public School, the tailored streetwear label they cofounded. A week before, their latest men’s collection was shown on a Manhattan sidewalk to glowing reviews from consumers and industry insiders alike, and just a few days later it was announced that Public School had been tapped to remix a Fitbit wearable fitness tracker to bring style to an unlikely category. (Both Osborne and Chow adorn their wrists with one.) Two days later, they would take a bow at DKNY, where they are co-creative directors—their third show of the month. It’s a whirlwind week. But Obsborne and Chow know that they must stay kinetic to keep the momentum.

The speed at which Osborne and Chow move might give others whiplash, but their composure through back-to-back presentations mirrors their keen ability to navigate the fashion autobahn. Originally founded in 2008 as a modest menswear line, Public School has become a runaway freight train in the U.S. fashion industry, with Osborne and Chow as the mad conductors. Aside from introducing a sought-after women’s line, the New York natives’ lauded casual urban aesthetic has been employed in a variety of ways, mostly through partnerships with established brands. For American luggage giant Tumi, they designed a suitcase, bag, and backpack; for Nike, two pairs of Jordan sneakers; and for J. Crew, a 2014 capsule collection sold out within hours of launch. According to an article published by The Wall Street Journal, it’s now a $4 million business with sales that have grown 30 percent annually in 2014 and 2015. Their climb reached a crescendo last year when Osborne and Chow were tapped to be the new creative directors of the dusty DKNY label after Donna Karan announced she was stepping down. Once considered upstarts with only a cult following, the duo has successfully broken into the mainstream, setting up a strong infrastructure with no plans to slow down.

“It’s clear the business is burgeoning, but with so many things to do, they have to relinquish some control,” says Anthony Landereau, president of Public School. The former Marc Jacobs International executive was appointed in January for this very reason, marking a sea change in the operations of the company. His role relieves Osborne, 32, and Chow, 41, of managing growth and strategy as well as the day-to-day operations necessary to run an efficient team. The solid hire adds a stem that will help balance Public School’s left brain/right brain. After all, great creative does not necessarily equate to great strategy. Take designer Scott Sternberg, for example, whose seemingly booming label Band of Outsiders abruptly halted its operations last year, citing financial distress. (His stated ambition to to grow the popular preppy line into a multimillion-dollar cash cow fell flat when it was reported that the well ran dry.) “It’s an interesting transition phase to see how our team will adjust to not working directly with us for every single decision,” Chow says. “That’s how companies get big and go on to be successful.”

Despite this new engine in place, success is not something Osborne and Chow acknowledge as part of their experience—at least not yet. “There’s always that idea of being one step away from success and one step away from failure,” Chow says. Adds Osborne: “We’re not really in a place to celebrate. I feel like we’re far from it. At any moment this could all be in the past.” At one point it was. In 2010, Public School shuttered its doors, two years after launching. As hindsight does, it provided clarity for how to proceed. Going back to designing under another person’s direction wasn’t an option. “I knew early that working for somebody was not going to be my end all be all,” says Osborne. So they regrouped, did some Monday morning quarterbacking, and in 2012, came back with a renewed focus.

Then came the prizes. The catalyst for Public School’s meteoric rise in the U.S. market began in earnest the following year after Osborne and Chow won a slew of awards from the Council of Fashion Designers of America (CFDA), including the esteemed CFDA/Vogue Fashion Fund. With it, as evidenced by other winners like Alexander Wang and Proenza Schouler, comes high-profile industry mentors and access to the inner workings of top companies. By 2014, the number of stores carrying the label jumped from 6 to 30. “They managed to surround themselves with the right people,” Landereau says. In fact, Landereau himself came to work at Public School by “mentor” recommendation. Still, that doesn’t discount Osborne and Chow’s ability to establish a clear vision and distinct image on their own. “The CFDA Awards were without doubt an important boost for the brand,” Landereau says, “but I really admire the fact that Dao-Yi and Maxwell managed to create a very defined DNA.”

The thing that makes Public School so appealing to both consumers and other brands is exactly that. Like the guys themselves, it’s well-liked and approachable, but unabashedly cool. Still, there’s a caveat to coolness—with it comes the possibility of oversaturation. Chow and Osborne have managed to pilot these decisions without misstep by choosing products that fit their own lifestyles, but can simultaneously expand brand awareness. “We view the collaboration with Public School as a win-win-win,” says Tim Rosa, vice president of global marketing for Fitbit, whose partnership with Osborne and Chow has drawn buzz. The duo reimagined the fitness tracker’s band to be a sleeker, more wearable wearable. “We get to work with a really current brand that brings a new aesthetic that offers more versatility for our customers, and Public School gets the benefit of our global footprint,” he says. Adds Chow: “It gives us leverage to make a splash.”

In 2015, Caroline Brown, CEO of DKNY, capitalized on the designers’ impact in perhaps the biggest way when she, along with Donna Karan, the brand’s founder and namesake, strategically brought on Osborne and Chow. It was an attempt to catapult the struggling label back into the closets of fashion’s “It” girls, like in its ’90s heyday, when Cindy Crawford and Naomi Campbell sported the logo. Their most recent task, redesigning the Soho store to be a reflection of their DKNY, debuted last month. The sleek, pared down retail concept, concieved with architect Andreas Bozarth Fornell, combines raw and refined materials, which represent the evolution of the label as a work in progress. “[DKNY] began as a brand pushing right to the edge of fashion,” says Brown. “We’re looking to move that forward to the edge of what is right for today. Max and Dao-Yi have the pulse on what that means.” The hire was an eye-opening move for the guys, placing them into a contrasting setting, which is lorded over by major conglomerate LVMH. (The French luxury juggernaut bought DKNY in 2001.) “We are in both worlds now,” Chow says. “A huge corporate structure makes us really appreciate having our own business.”

Though small in comparison to the house that Donna Karan built, there is much to be explored on the Public School side of things going forward. “Now the challenge is to take the brand to the next step,” Landereau says. For him, that means expanding further into to Europe and Asia and establishing a more substantial e-commerce business. The opportunity for growth is immense, but there’s something to be said for the job Osborne and Chow have accomplished thus far. They’ve helmed a company that now employs a dozen people with retailers in 14 countries, all the while keeping production in their native New York. Still, when it’s suggested that the pair are adept entrepreneurs, their modesty prevails. “Great?” Osborne asks. “One day, I hope.”