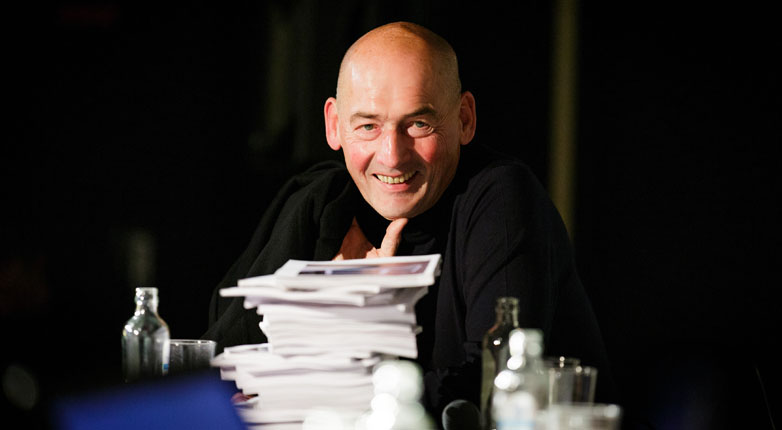 Architect and perennial provocateur Rem Koolhaas, 69, is the curator of this year’s Venice Architecture Biennale (June 7–Nov. 23), themed Fundamentals. He had been asked to take the role a number of times in years past, but held out until two conditions were met: a year and a half to plan the show and permission to flatly exclude contemporary architecture.

Three interlocking exhibitions make up the Biennale. “Absorbing Modernity 1914–2014” examines the profound influence of modernism in nation-building worldwide. “Elements of Architecture” is a historical survey of basic architectural components like the door, ceiling, window, and staircase. And “Monditalia” devotes the Arsenale to a comprehensive cultural study of Italy.

Even before the 1978 publication of his landmark text Delirious New York, which explores the development of Manhattan-style urbanism, Koolhaas had made history and cultural contexts focal points of his practice. Fittingly, the 2014 Biennale offers visitors a rich tapestry of architecture’s past, which has impacted its present in unexpected, sometimes counterintuitive ways. In this exclusive interview for Surface, the architect discusses the Venice showcase and his vision for it.

As far as I understand it, the theme you chose for the Biennale, Fundamentals, is an interest that you’ve had for some time. Could you go back to the beginnings of this idea? Was there a trigger or an epiphany?

For the “Elements of Architecture” exhibition, you broke the practice down to fundamentals by creating spaces dedicated to singular building elements. How did you choose these basic entities?

It’s a core group: floor, wall, ceiling, window, door, facade, balcony, fireplace, toilet, stairs, ramp, escalator, and elevator. Where there was a complication—items that transcend from one element to another, like pipes—we stopped. You would think, in principle, that each element is fundamentally stable, but we discovered that through modernization in the 19th century, some elements became machines rather than architectural elements, or they became robots, or they disappeared entirely due to our consideration of comfort or security. Each element reflects enormous social changes.

We’re also discovering interesting similarities between the past and the present. For instance, fortresses built in the Middle Ages, specifically the doors, have an enormous number of zones. There is never a direct way in; entry always involves detours. The current American airport syndrome, and the process of checking in, is almost exactly alike in terms of the layers and the buffer zones. We’ve discovered in the elements both radical changes and surprising continuities.

No two rooms in the exhibition are the same. There isn’t a pattern that connects all the rooms, and the sequence doesn’t really follow history. In the first room, there’s a kind of a history of the ceiling, but the room for windows is a factory. So each room is a surprise. Can you talk a little bit about this?

We tried to make each room different but also aimed to highlight the most pertinent, or most acute, dilemmas. For instance, the fireplace: We actually have a sample of the location where the oldest man-made fire was found. We have the remnants of that fire, from Bolomor Cave in Spain. The other part of the fireplace room is an exhibit by MIT called “Local Warming.” It proposes that in the future we will not heat entire rooms anymore, but will be followed by rays that create a skin of heat around us.

So the elements are also points of connection between the old and new.

Yes, we have discovered many amazing similarities of interest; certain generations have rediscovered, or seem to have focused on, certain subjects. We’re talking particularly about a generation who are now in their 90s.

Or perhaps it’s not a rule but a pattern.

Yes, it’s a pattern. We discovered that three men who focused their life on analyzing a specific element are all from the same generation and they invested a lot in making the ramp more secure or more ubiquitous, or retelling the entire history of architecture through the staircase. These people belong not only to the same generation, but were born within two years of one another. What that means we don’t know yet.

These older participants are the only living architects or practitioners in the Biennale. You’ve broken away from the tendency of past curators to make the Biennale an exhibition space for recent architecture projects. It’s all going to be about the past, or, as Erwin Panofsky said, “the future invented with fragments from the past.” Tell me about some of these figures, like Claude Parent, who are in their 90s.

The stair exhibit started with the work of the 90-year-old German professor Friedrich Mielke, who lost a leg in Stalingrad and, as a result, developed an obsession with staircases. He wrote 50 books on staircases and collected an amazing amount of information about the regional differences among staircases in German villages. I think he began with the hope of being able to generalize, but he then gave up that hope; it was not as systematic as he had expected. There is a series of fantastic drawings by Mielke in which you vaguely recognize something familiar, but it’s redrawn with complete emphasis on the staircase.

In the case of Claude Parent, we have a man who wanted to reinvent the ramp and declare it the surface of the future. It was more interesting to him than horizontal surfaces. He developed ways in which you could inhabit ramps, and with this idea he built houses. On the other hand, we have an American expert, Timothy Nugent, who made elevated spaces more accessible for handicapped people and who was singlehandedly responsible for the incredible proliferation of ramps we now know in every city.

This cluster of the exhibition will be spectacular and will clearly emphasize the advantage of looking at the elements. The ramp and staircase are so humble that they’ve never significantly been part of any theory—apart from these extreme pockets.

These elements can also produce new iterations and reappropriations. I’m thinking of the late Elaine Sturtevant, the artist who revisited Duchamp’s “Fresh Window.” Of course, Duchamp used the door typology, and he also invented the ceiling as a display feature, hanging coal bags from it for his 1938 Surrealist exhibition.

Once you look deep into one subject, after a while the substances seem to become transparent. Suddenly you see some relationships, and this 1923 pattern is the strongest we’ve seen so far.

There is probably also a battery of technologies being prepared that correspond perfectly to ubiquitous listening and spying. So future architectural elements may be the elements that betray our innermost thoughts or beings.