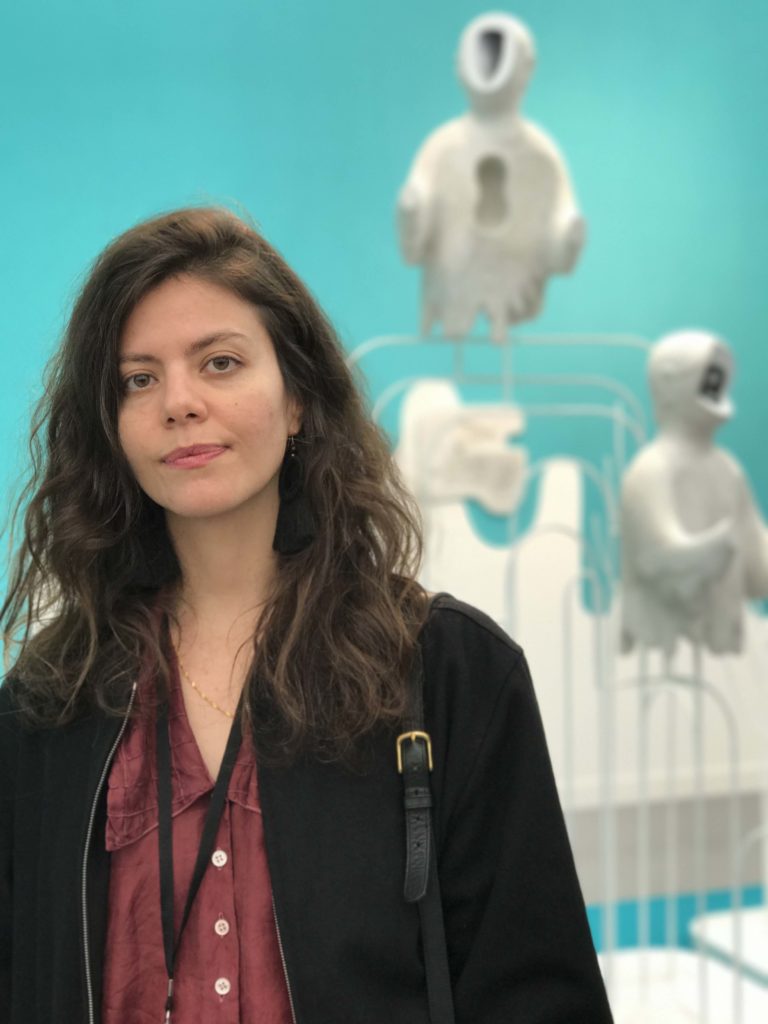 The New York-based curator gathered galleries showing emerging artists from around the world for this year’s Frieze London art fair.

The New York-based curator gathered galleries showing emerging artists from around the world for this year’s Frieze London art fair.

As a curator at Sculpture Center in New York, Ruba Katrib made a name for herself by introducing artists making waves abroad to stateside viewers, often in group exhibitions that were at once demanding and playful, including “The Eccentrics” and “A Disagreeable Object.” She recently announced that she’s moving to MoMA PS1—the Museum of Modern Art’s contemporary art outpost just down the street from her current job in the borough of Queens. Before taking over her new post, she worked with Fabian Schoeneich of the Frankfurt contemporary art space Portikus to organize the Focus section of this year’s Frieze Art Fair, including the performance series Frieze Live. We caught up with Katrib during the Frieze preview to talk about art fairs and her plans for PS1 while watching a performance based on Medieval marginalia.

We’re in the middle of an art fair watching a group of people in bunny costumes do what look like yoga poses. What’s going on here?

“It’s a work by Candida Powell-Williams, who is represented by Bosse & Baum from London. Based on what I remember from the proposal, she has created these characters and these costumes after medieval drawings. This is the first time I’m seeing it. It’s interesting to work on the performance part of the fair because the artists and the galleries have a proposal but then it always changes in the end.”

How many performance works are you presenting at the fair?

“There are four performances running throughout the show. They’re going to repeat every day. Project88 from Mumbai brought Neha Choksi, Southfirst in New York brought U.K. artist Mark Fell, and The Commercial in Sydney is presenting Agatha Gothe-Snape.”

Is there a thread connecting them?

“There really isn’t a specific thread. [Frieze] Live is a great opportunity for galleries to participate in the fair and bring artists who normally wouldn’t work in a traditional booth. Sometimes it’s a chance to bring in a gallery that’s super young, really new. Emalin from London did Live last year and this year they have a booth.”

The Focus section of the fair seems larger this year.

“It’s actually fewer galleries. There are thirty-four, which I think works really well because it feels more spacious in here.

The geographical range is really important when we’re selecting exhibitors. Revolver Galeria from Peru is new this year. Cooper Cole from Toronto is also new, and they’re showing younger artists from Canada. It’s really important for the fair to bring galleries that are integral to particular regions but don’t have an international profile.”

So why are you leaving Sculpture Center for PS1?

“I love Sculpture Center. It’s been really amazing, but I felt that now was a good time. I feel like I’ve done a lot there—twenty-six shows, including five large-scale group shows. PS1 is a totally different world. It works so differently, and I’m really looking forward to learning all the things I can learn there and working with more colleagues and a huge space.”

What do you think you’ll bring to the curatorial mix at PS1?

“I think I fit the profile of what PS1 does in some way because it’s one of the few museums that does group shows that aren’t geographic or based on a time span or something. We can do idea-based group shows.

But that’s always such a hard question [to answer] before you’ve started. I don’t even know where I’m sitting. It’s still, “What’s my email? Where’s the copy machine?”