The Seamarq harmonizes with Gangneung's seaside landscape and is Richard Meier and Associates' first ground-up hotel.

The Seamarq harmonizes with Gangneung's seaside landscape and is Richard Meier and Associates' first ground-up hotel.

With a distinguished career spanning more than five decades, one would think that architect Richard Meier has done it all. Yet his New York firm recently celebrated the completion of its first ground-up hotel, the 150-room Seamarq in Gangneung, South Korea. The project proved challenging in numerous ways, not least of which being the harmonization with the diverse natural surroundings. “The first impression is that you don’t want to touch anything because the landscape is so beautiful,” says Dukho Yeon, an associate partner at Richard Meier & Partners Architects. “We wanted to preserve the quality of the site as much as possible.”

The 2018 Winter Olympics may still be two years away—Gangneung will be hosting the games along with nearby Pyeongchang—but Seamarq is already changing the makeup of this ancient city known more for its classic Joseon-era buildings than modern architecture. The milky white structure rises above a tree-covered hill overlooking Gyeongpo Lake and the Sea of Japan, with views of the Taebaek Mountains in the distance. “Both the hotel tower and banquet hall are integrated into the landscape,” Meier says. “The whole entry sequence, a winding road from the gate up to the hotel, gives you a sense of being out of the urban area and into a special place.”

The location is, indeed, special, and not just because it now houses a 21st-century architectural marvel. The land and the hotel that stood on it previously are owned by billionaire Chung Mong-joon, scion to the Hyundai empire and a prominent South Korean politician and former FIFA official. (He’s currently serving out a six-year ban for corruption.) This scenic stretch is where he was born and also where his father would go to get away from the frenetic pace of the city. Because of a deep personal connection to the site, the owners were hands-on in every stage of its development.

“The architect can do his work, but when you have a good relationship with the owner it makes it even better because they add so much,” Meier says. “They brought a lot of ideas to the table that maybe we wouldn’t have considered, but they knew what they wanted and were able to articulate it in a way that makes it better for everyone.”

The result of that synergy is an airy structure of glass, metal, and porcelain-like concrete cladding imported from Italy, all positioned in a geometric tilt that maximizes the views in every direction. “Even though it’s a tall building, it feels light,” says Meier. “I wanted to have a certain amount of transparency, openness—you can see the sky, the sea, the landscape around it.”

The cavernous two-story lobby feels like a design showroom. The centerpiece is a 65-foot table crafted from a single Japanese zelkova tree trunk, with George Nakashima chairs and a wavy check mark-shaped chandelier by Ingo Maurer hanging above. In the lounge, a soaring granite fireplace wall is accented with Mies van der Rohe– and Eero Saarinen–designed furniture. A Venetian plaster staircase that resembles a martini lemon twist leads to the mezzanine. “As you move through the hotel, your curiosity is aroused so that you want to see everything,” Meier says. That includes a locally sourced Cantonese restaurant, a spa lined in oak slats, spacious rooms with Jasper Morrison tables and floating balconies, and an infinity pool rimmed by a teak patio. While the complex is contemporary, the grounds—the work of New York studio James Corner Field Operations, whose past projects include the High Line—are dotted with ancient pine trees and a cluster of small suites modeled after traditional Korean hanuks that incorporate local stones and wood, not to mention an open-air amphitheater.

But no amount of planning—and with the 12-hour time difference between New York and Seoul, plenty of it was required—fully prepared Meier and Yeon for the dramatic end result. “You always have an idea about how it is to be there, and how it is to experience the spaces,” Meier says. “Butwhen you see the reality you say, ‘Hey, this is even better than my ideas!” 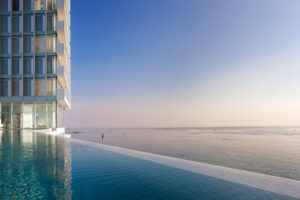 A Restaurant Redesign by Rolf Sachs