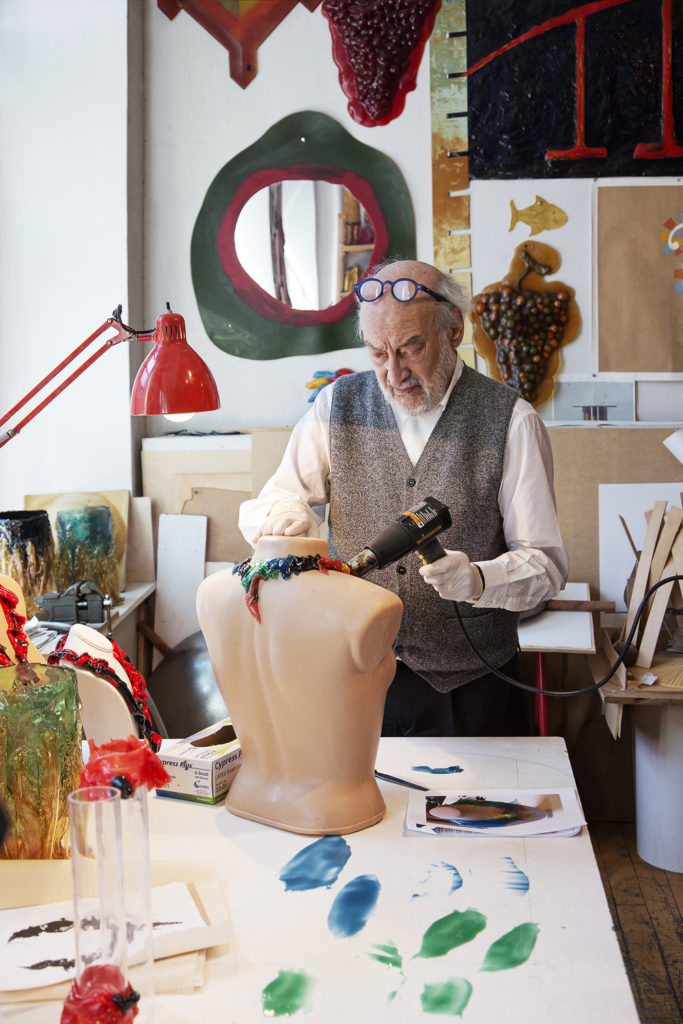 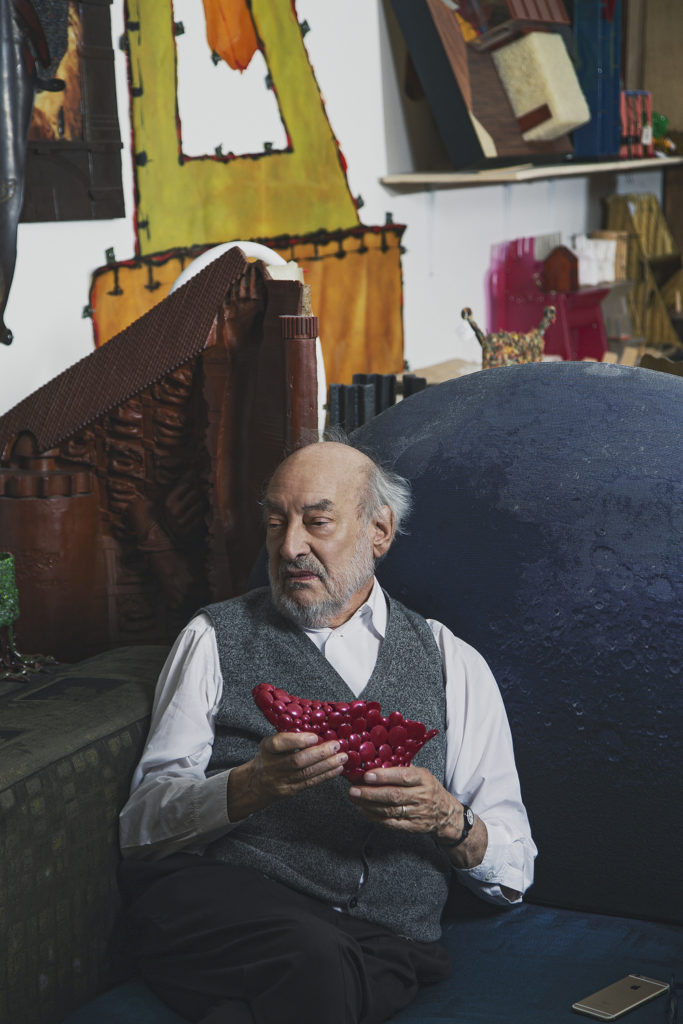 He's one of the most celebrated Italian designers in modern history, and, as ever, social issues are his inspiration.

He's one of the most celebrated Italian designers in modern history, and, as ever, social issues are his inspiration.

You designed a chair made of rags in 1970. Do you have one of these in your home?

How sad for you. It’s definitely one I’d want. For which room in my apartment would you suggest I place it?

The rag chair is a piece of reality. It’s good in any place, like the lobby of a hotel, for instance. The one I did is in a living room.

No, because they are treated in a way that they are fireproof.

So you’re aware of such hazards when you’re designing? That falls under the category of “functionality,” no? If a piece is beautiful to look at, but at the same time one spark away from becoming an instrument of death, one of your boxes as a designer isn’t being checked, right?

More or less everything I do, I take care of the practical side first. If you do something that’s not practical, it’s not a service to people. Functionality is very important.

What other things do you take care of in your work?

I generally try to give meaning to an object—what I think politically guides me, things I was reading in the paper in the morning. Treating the object in this way, it becomes art.

This is a wonderfully cluttered studio you have here. Did you design it?

I did very little things. It’s very simple. It was empty at first, but after 30 years we have no space to move around.

The “Donna,” or Up 5 and 6, chair and ottoman from the late ’60s are among your most famous creations. They were designed as a statement about the endemic mistreatment of women. Are you an activist?

No. As a citizen of a country, you participate in the political debate. You take a position in front of certain problems. We don’t need to pay close attention to see that women are mistreated in many countries—not only 50 years ago but today. We’re talking about half the population of the world. Even in the U.S., a very evolved country, women are paid less than men. That’s when identity becomes like a prison. I was trying to give the “Donna” chair the body shape of a woman. It’s the image of a prisoner. With the ottoman, it looks like a ball and chain.

Have things improved since then?

I don’t think so. I thought maybe the situation was changing. But no.

How often are you motivated by society’s ills?

It’s my job to witness what’s going on in everyday life. Also, sometimes with my work I touch philosophical points of view, such as: People must be free of coherence. It’s a state of mind that asks you to always be the same. When I was 20 years old I was talking about the necessity of being incoherent. Are we living in incoherent times? Yes. We’re living in a time that’s very liquid. Values go up and down. It’s like the waves of the sea. In reality, we have very weak values today. They appear in reality and then they disappear. In a certain way, this is good. It shows that our time has a lot of vitality.

I hear a lot of people being contradictory toward Donald Trump because he’s vulgar. The moment we accept democracy—when someone is elected by the people—we can’t discuss it. If we talk about vulgarity, a lot of politicians are very vulgar. The political class is at the end of an era because in the old days being a politician meant serving a country. Now it’s the contrary. Now the people have to serve the politician.

You’ve been living in the U.S. for decades. Are you a citizen yet?

If you could vote here, who would your candidate be?

Personally, I hope a woman will be the president. She will represent half the population of the world. That can give hope to women globally who suffer in their reality, knowing that a woman occupies the most important political position in the world. The job of a man is an old job. The personality closer to the nature of our time is the female one.

What does that last part mean?

I don’t want to talk about revolution. But an evolution in society can take place when women take power.

Is Hillary that woman?

What about Sarah Palin?

Between a man’s Right Wing and Sarah Palin’s, I take Sarah because she’s a woman.

A show of your work recently opened at the Palazzo Morando in Milan (through July 31). What can we expect?

My work is multidisciplinary. I’m a jewelry-maker sometimes. When I see a movie, I’m someone who’s watching a movie. We are not static in one thing. In Milan, it will be architectural drawings; sculpture made of ice; resin jewelry, Up 5 and 6. And I stress multi-disciplinary because in America there’s an emphasis on specialty. It’s very important. Michelangelo was a poet, a painter, and a sculptor.

You mean he was a “Renaissance Man”?

[Points to this interviewer, waving his finger, and nods his head in agreement.]

What’s next for you?

Soon it will have been 50 years since I created Up 5 and 6. We’re making a special edition [with B&B Italia] that will correspond with times of days and seasons. At night, it will be wrapped in pajamas, for example. Objects in a certain way are like people. They both have the right to be different. The best that we can say is that we’re unique. In 1975, for Cassina, I made the first chair where each one coming out of production was similar, but not the same. It was a very important moment. That chair is now at MoMA.

You mentioned architectural drawings. Where have you built buildings?

That’s an important subject, buildings. Big projects in New York, for example—that’s not architecture. Those are products. They’re not pretending to be architecture, but we call them that anyway, and I don’t know why. Architecture is very rare. The radical side of it is not there. In New York, we have maybe two examples of architecture: The Louis Sullivan building on Bleecker Street and the Guggenheim building by Frank Lloyd Wright.

So architecture doesn’t exist in this country?

I think it’s rare in America that people know what architecture is. Frank Gehry did something important with the Guggenheim in Bilbao, but then he started to repeat himself a little bit. When I was in university, [Finnish architect] Alvar Aalto came to give a lecture. He came in and said, “Architecture is very difficult.” And then left.

That’s all he said?

Yes. How many Gandhis in the world? One. How many architects? Not many.

As a New Yorker since 1980, do you feel the city’s skyline is changing for the better?

We’re not pursuing equality, but we are pursuing diversity. The buildings going up in New York reflect that.

Mies van der Rohe brought us the paradigm of the monolithic, vitreous tower with the Seagram Building of 1958? Are you a fan of his?

Would you ever design a luxury tower?

Yes, if someone asked me. It would be very innovative.