Longtime collaborators Daito Manabe and MIKIKO discussed how they use technology and dance as a means to blur the line between fantasy and reality.

Longtime collaborators Daito Manabe and MIKIKO discussed how they use technology and dance as a means to blur the line between fantasy and reality.

On August 24, Surface hosted the 47th installment of its Design Dialogues series. This edition featured Daito Manabe, who is the co-director of Rhizomatiks Research, as well as being an artist and interaction designer and programmer, and MIKIKO, the director and chief choreographer of the dance troupe ELEVENPLAY. Surface’s design editor, Tiffany Jow, moderated the discussion, which took place at the just-opened JAPAN HOUSE salon in Los Angeles, California. The three discussed how Manabe and MIKIKO use cutting-edge technology to enhance live performance, culture, and entertainment. 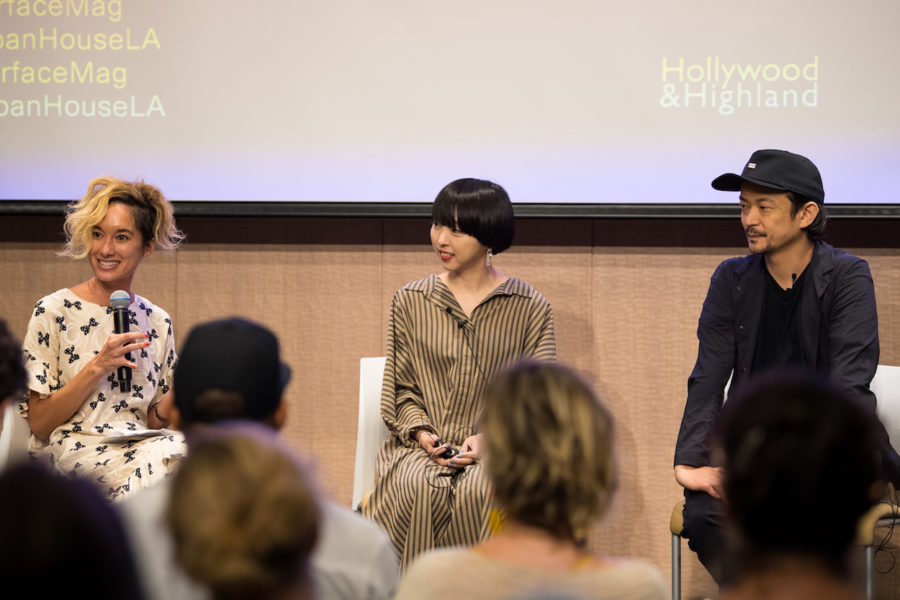 Manabe described how he works with MIKIKO and the dancers of ELEVENPLAY to create their remarkable, futuristic performances: “My objective has always been to give MIKIKO as much creative control as I can. I take care of the physical programming and software,” he says. Although previous dance performances have incorporated elements including drones, robotic arms, and lasers, Manabe explained that the dancers humanize the experience. “With the dancers up on stage, the performance becomes relatable to audiences. They can picture themselves up there, experiencing the technology in the same way as the dancers.” Asked if his interventions posed challenges to the performers, Manabe replied, “The drone stuff is really dangerous—we had one dancer running away scared! But, the feeling once we had overcome the challenge [of combining dancer and drone in a choreographic work] was pretty tremendous. That’s why we keep trying new things.”

“It takes a lot of technique and skill for the dancers to, in a sense, ‘beat’ the technology, and go beyond the technology,” says MIKIKO, who works constantly to fuse technology and dance. “Through this whole process, the message I’ve wanted to put forward is that humans are really infinite. They have infinite potential in terms of their capabilities for expression.”

Manabe elaborated on how he creates pieces that take viewers a step beyond traditional live performance: “In our work, you get a sense that [things oscillate] between the real and the virtual. What I’ve been finding interesting lately is neither of those things; rather, I’m interested in the grey area between them. So we’ve been exploring that.” As an example of how he accomplished this, he offered an example of his use of VR goggles: “[We don’t have people] put the goggles on and become immersed in a world. Instead, we take a camera and attach it to the goggles, so the viewer is seeing a combination of what is actually there, and what is in a virtual world we created. You lose a sense of what’s real and what’s not.”

Near the end of the conversation, MIKIKO discussed how technology affects her choreography—that idea intrigues her as a dancer: “What I find really interesting is how far the technology is going—it isn’t just a dancer dancing anymore. That plays a role in how I choreograph. Rather than creating a crazy experience that requires an explanation afterward, I enjoy [devising otherworldly] experiences that an audience may not understand.” The result of this kind of performance, she says, is priceless. “Sometimes people have come up to me after a performance [with tears in their eyes] because they had a moving experience during the show. That’s the type of reaction I really go after when creating a piece.”