Floating over water in the middle of parkland, it's a masterclass in making heavy materials lighter than air.

Nestled into the placid, wild wetlands of Swan Lake Park of Rongcheng in China’s Shandong province, is Swan Lake Bridge House, a ribbon of gray floating over a pond like a bit of morning fog. On approach, it’s lighter than air—something that might blow away with a strong wind—despite having a structural form of a sharp-angled, perforated, wood-cast concrete sarcophagus. It’s no mean feat that the designers of TAO – Trace Architecture Office were able to make the building so boxy, so heavy, into something that—along with its wood non-attached observation tower—has a certain fairytale poetry to it.

TAO – Trace Architecture was commissioned to create a viewing platform and visitor’s center—the park is a favorite spot for birdwatching—that spoke to the reedy, quiet surroundings, and offered the same sense of peace as the site itself. Their response is this low-lying, cantilevered wood-cast concrete shaft and a wood-clad tower with spiral staircase, both of which mirror the local pine materiality. The structures offer a neutral color scheme that does not class with the surrounding reeds and soaks up the light as well as the surrounding flora. Under a setting sun, structure and nature reflect the same orange hues.

But the Bridge House does more than provide shelter and snacks to birders. Through internal vertical and horizontal shafts along with the naturally lit tower, the structure splits the views, creating narratives and options that a simple 360-degree platform would not. Yes, the inside of the Bridge House is where it achieves weight and heft (its passages are almost tomb-like). But they do, however, offer a certain drama that, along with the building’s graceful exterior, provide a sense of discovery and a journey between shadow and light that seems pulled straight from a bedtime story. 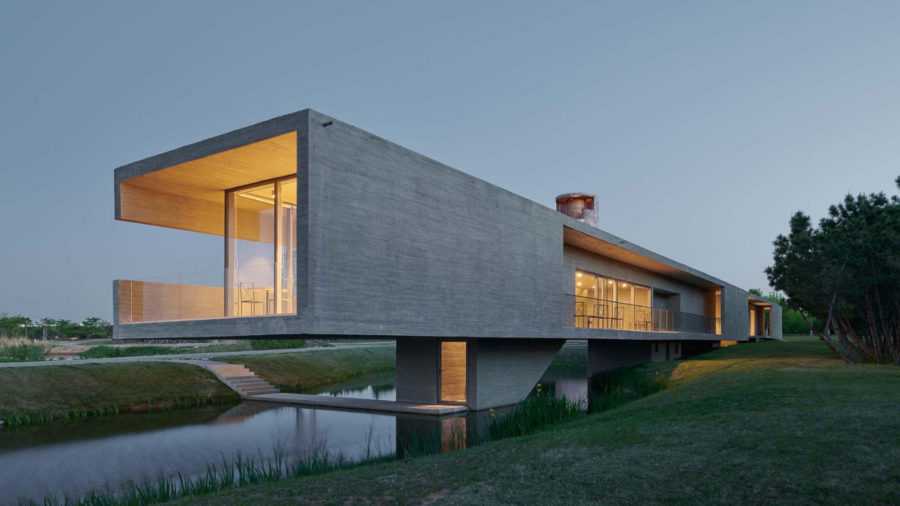 Can a Group of Designers Solve London’s Urban...

These Lucky Birds Are Balling Out at the Brooklyn...

One Brand’s Bid to Build the World’s Greenest...

A New Elevated Park Offers a Blueprint to Cooling...

Should the U.S. Create a National Memorial for Gun...

This L.A. Restaurant is the Pinnacle of Atmospheric Design