In Senegal, a Transformative Hospital Steeped in Local Tradition

Thanks to the Josef and Anni Albers Foundation, the Swiss-based architect Manuel Herz upgrades an overcrowded Senegalese pediatric hospital into a state-of-the-art facility tailored specifically for its community.

Three years ago, when Nicholas Fox Weber visited the pediatric unit of Senegal’s Tambacounda Hospital, he was shocked to see three babies squeezed together on a broken incubator. The severely overcrowded hospital is the region’s only major medical facility; it serves more than 20,000 patients per year, including from the neighboring country of Mali.

Seeking to use his platform to improve these conditions, the director of the Josef and Anni Albers Foundation soon launched a design competition to build an entirely new Maternity and Pediatric Unit for the hospital pro bono. “With our many projects in eastern Senegal, we at Le Korsa felt that it was unconscionable, and unnecessary, for three premature babies to be put on a small surface less than a meter square, with a light bulb hanging over them, instead of in a proper incubator,” continues Fox Weber, who’s also the founder and president of Le Korsa, the foundation’s philanthropic arm. “Dilapidated structures, inadequate planning, and a grim atmosphere: surely it was possible to do better.”

Fox Weber knows that to be fact. Since establishing Le Korsa, in 2005, the foundation has provided ample educational and medical support to rural Senegalese communities. In 2015, Le Korsa launched THREAD, a cultural center for inhabitants of the rural village of Sinthian designed pro bono by Toshiko Mori. The firm then spearheaded an elementary school in Fass, a nearby village, that offers secular education alongside traditional Quranic teachings. Both structures share subtle yet evocative references to Josef and Anni’s practices and Bauhaus principles, such as woven rooftops reminiscent of Anni’s textiles and the geometric wall and door patterns that recall Josef’s prints.

The Swiss-based architect Manuel Herz—a published scholar of African Modernism—easily won the design competition for the hospital after visiting Tambacounda and immersing himself in the community. Working closely with local leader Dr. Magueye Ba, Herz enlisted the expertise of local craftsmen and engineers to devise a two-story, curvilinear building that houses 150 patients and incorporates passive climate design features to combat the challenges posed by the region’s scorching climate. The snaking structure’s 23-foot width and mashrabiya-inspired use of lattice-like brickwork, meanwhile, allows for natural cross-ventilation and cooling—it also provides a compelling play of light and shadows that undoubtedly uplifts patients on a sunny day.

Though Herz never cited Josef or Anni Albers as influencing his previous work, the new clinic seems to exemplify the duo’s shared ethos of “minimal means for maximum effort.” Its test facade, for example, was expanded to build a new school for neighboring children, and he also recently completed Tambacounda’s first-ever playground. “Designing and building the Pediatric and Maternity clinic at the Tambacounda Hospital has been maybe the most rewarding experience in my architectural career so far,” says Herz. “This process has led to designs that were surprising, much more interesting, better adapted to local conditions, and more beautiful than any single-authored project could’ve delivered.” 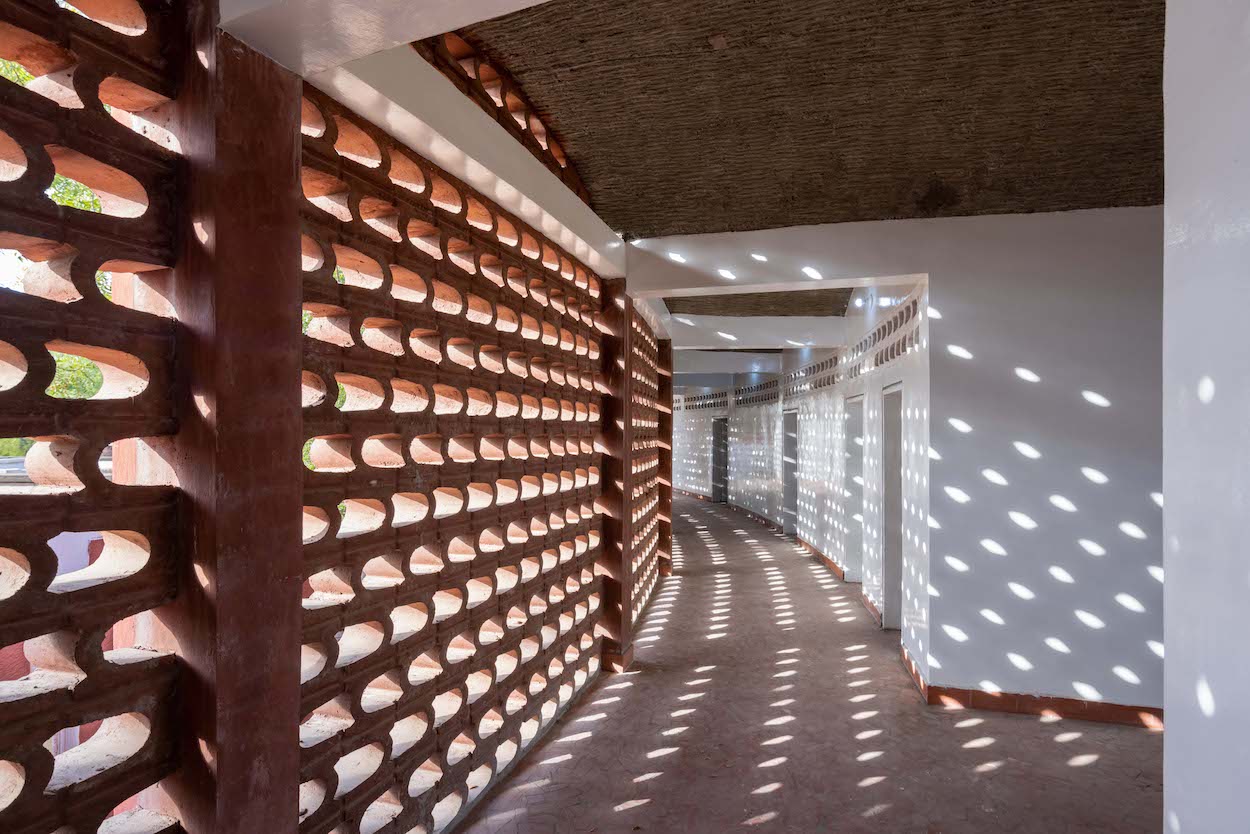 Herz’s work isn’t done, either: He’s currently designing staff quarters inspired by an Anni Albers print to attract more doctors from the city. Le Korsa is currently raising an additional $500,000 to see the project through to completion. “It can be hard to attract doctors and nurses to Tambacounda,” Fox Weber tells The Art Newspaper. “It’s remote and it’s terribly hot, even by Senegalese standards. The solution, in part, would be to have really nice housing for the staff.”

At the Venice Biennale, which is slated to open May 22, Herz will present an installation called “The Many Lives of Tambacounda” to showcase the hospital’s wide-reaching impact within Senegal.