With two new properties under her belt, the Texan hotelier reflects on her burgeoning empire (and breakfast tacos).

Liz Lambert is the accidental hotelier. The longtime Austin resident spent years as a buttoned-up prosecutor before purchasing her first run-down motel on a whim in 1995. Now, her eclectic sensibility, on display at the six retro-meets-modern properties that make up Bunkhouse Group, stands out in an industry that too often turns to the same playbook. (It got the attention of Standard International, which acquired 51% of the company in 2015.) Inside the bar of the new Austin Motel, Lambert dishes on her recent openings, hometown pride, and Texas’s favorite morning snack.

As a fellow Texan, I have to ask: Do you like breakfast tacos?

What’s your favorite thing to put on them?

Jalapeños. I love a really good corn tortilla with eggs, thin slices of potatoes, and salsa. I had to learn to make tortillas when I lived in New York because there aren’t any up there. I have a dream of taking the breakfast taco nationwide.

Why did you decide to leave New York?

I feel like you hit a point in New York, after around three to four years, where you either stay or go. I remember this one time, it was super cold in New York in March. I came down to visit Austin, borrowed a friend’s truck and drove barefoot across Congress Avenue bridge, thinking, “What am I doing?” Austin felt like home.

I left Austin in 2013 after six years. How has it changed since then?

South Congress is on the precipice of a whole lot of change, and it’s sort of heartbreaking to me. What’s great about this part of town is that for so long, it’s been about Austin, and been run by people that love and care about preserving it. You’re supposed to be keeping it weird there.

How did you come into owning Austin Motel after all these years? It’s right next door to another Bunkhouse-owned property, Hotel San Jose.

The former owner, Dottye Dean, passed away and her son took over. As neighbors, we were helpful and friendly to him and when he decided to get out of the business he called me first. Most people who would’ve bought this place would’ve had to tear it down, because the land is more valuable [than the building]. But because we have the San Jose it was easier to extend our back house and run it as a hotel. We were in a unique position when we took over.

How did you decide on the style for the renovation?

There were a few different decades—thirties, fifties, and eighties—that were important to the Austin Motel and served as the time-period inspiration. Then there’s the iconic sign. Everybody knows that sign. There’s a certain roundness and bulbousness to it, which got it the nickname “The Phallus Palace.” We had to double down on that—we couldn’t just slyly say, “Oh there’s a big dick out front.” So we totally went for it. Our pool floats and rope hooks in the rooms are basically penises. And in homage to the old Austin Motel, we have a cooler with Boone’s Farm wine, Mad Dog 2020, and Mickey’s. All things that have definitely been drunk here before. 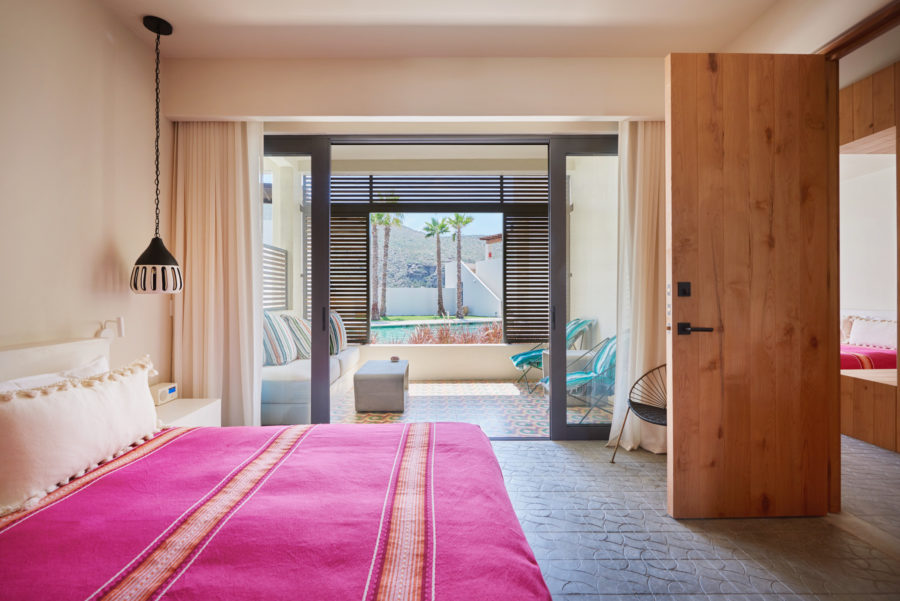 Your other new hotel, San Cristobal, is your first outside Texas. How did you decide on a location?

It chose us. I had never been to Baja before and completely fell in love with the place. Todos Santos is the polar opposite of Cabo Wabo spring break. We’re the only hotel on the ocean, though it’s not swimmable. (Fisherman have been launching out of there for eighty years.) There’s a great beach a few miles down called Cerritos where you can take surf lessons and lay around and drink.

Tell me about the design of San Cristobal.

The design firm Lake Flato and our team did everything we could to build in a local style, which is different from the beautiful textiles and leathers you think of in Mexico. The white stucco buildings are really minimalist and we used some old techniques we discovered in the restaurants and homes in Todos Santos, like floors with stamped patterns. We had most of the furniture made in Guadalajara, and used a ceramics place there, Cerámica Suro, which recently did a wall for Guggenheim.

What is your dream destination to open another hotel in?

There’s something about New Orleans. It’s the only European city in the U.S. I really love the grit and the layers. A hotel to me is about uncovering a place, to be inspired by the things around it whether it’s music, art, smell—you name it. I want to expand El Cosmico, and I’d also love to have a ski hotel. Somewhere in the snow would be beautiful.