A Jewelry Line That Is Both Brutalist and Buoyant

When the German designer Amelie Riech launched her jewelry studio in 2012, she felt uncertain about her career trajectory. The fashion designer, who also studied architecture and photography, decided to name her venture “Uncommon Matters”—a title meant to evoke both mystery and inclusion. To that end, her creations defy expectations of how jewelry should look and feel. Her debut collection featured a series of torus-shaped porcelain necklaces and rings. Her latest collection comes full circle, she says. Called Full Volume and now available at the MoMA Design Store, it expands on her experiments with the torus shape while delivering the durability of sculpture along with an extremely lightweight construction.

The collection consists of brightly polished gold and silver earrings, necklaces, and bracelets in tubular shapes that curve and arc. “I wanted to design big voluminous pieces of jewelry that were lightweight and comfortable,” says Riech, “while resembling something much larger and heavier.” She likens the forms to puffy intertwining donuts.

Striking this balance proved tricky. Many of the collection’s torus shapes have very small radii, which are difficult to bend, making it nearly impossible, says Riech, “to achieve such a lightness with traditional goldsmith techniques.” After testing different craft methods for more than a year, she found a solution using techniques from, oddly enough, musical instrument production. “This is the most difficult yet exciting part of my work—realizing ideas with the know-how of different artisans, from whom I learn so much.”

Citing the ideals of the Bauhaus and Socialist Modernist as her chief inspiration, Reich tried to make each piece feel distinctly her own. “The purism comes from within me, but it also may have something to do with my German heritage,” she says. The simple geometries “help me bring order into a chaotic system, much like life itself,” she says. “It’s meditative and reduced to the essential, which is why most of these forms are archetypal.” 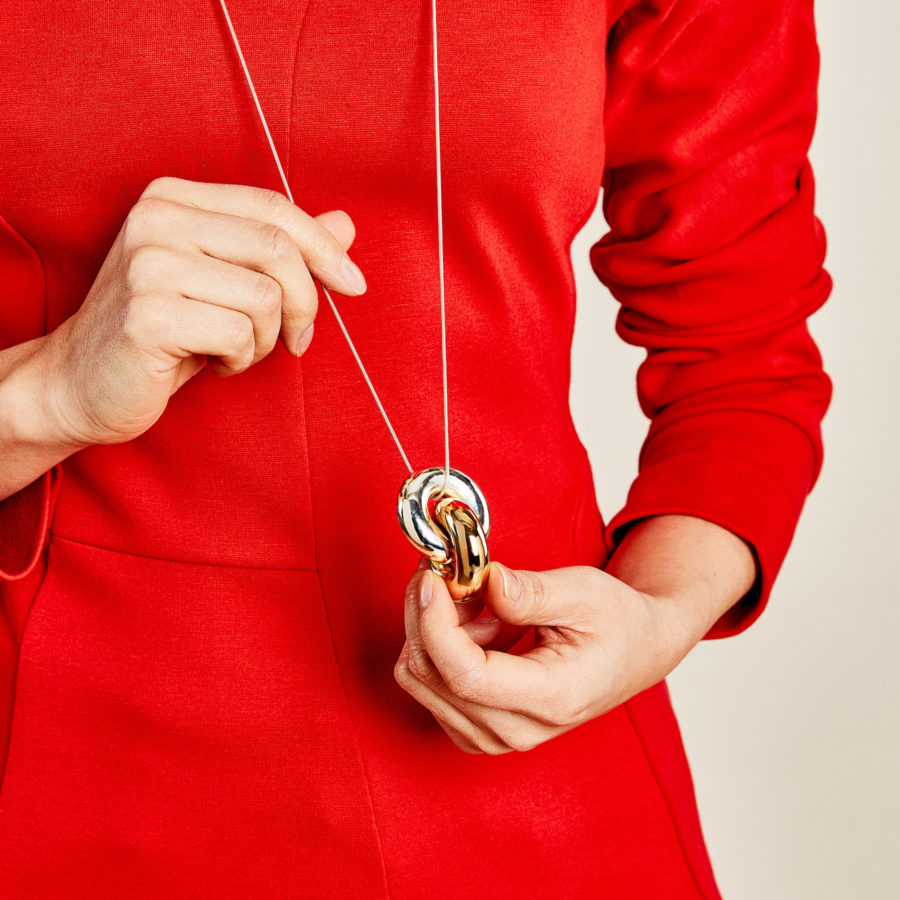 Ultimately, she notes, her pieces are about expressing the sensibility of the person wearing them. “Being a jewelry designer has made it possible for me to work really freely, because there aren’t many limits or requirements aside from wearability,” she says. “Jewelry is like the icing on the cake. Anything is possible.”

The Full Volume collection by Uncommon Matters is available for purchase at the MoMA Design Store.