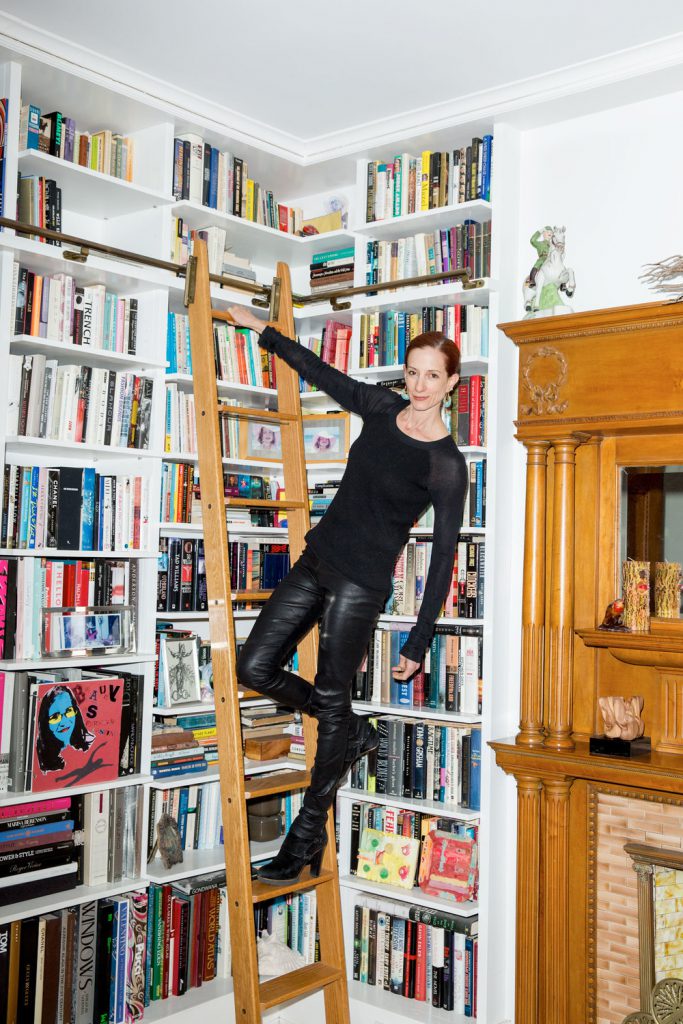 Dressing to meet Vanessa Friedman, the fashion director and chief fashion critic of The New York Times, is a stressful business. Not only is she one of America’s most incisive commentators on style, she has persuasively argued that our sartorial choices reveal a huge amount about our inner selves. So it was with some trepidation that I plucked my East Village writer’s garb from the wardrobe—vintage ’70s shirt, faded jeans, green sneakers with palm leaf pattern, scarf purchased in Bhutan—and made the expedition to Park Slope, where Friedman lives in an art-filled brownstone with her husband and three children.

It was a relief to find that Friedman could not be further from the sort of judgmental ice queen parodied in the likes of The Devil Wears Prada. In fact, from the moment she opened the door, she was relaxed, down-to-earth, almost self-effacing—as suggested by her own pointedly unflamboyant choice of clothing, dressed head to toe in black, with Neil Barrett leather leggings and a Reed Krakoff knit sweater. “I pretty much always wear the same thing,” she laughed, as she curled up on a chair by the fireplace. “A lot of black. Some gray. Some metallic. I choose clothes that are comfortable, that don’t crumple when I travel, and are not immediately identifiable as a certain brand.”

After replacing Cathy Horyn and Suzy Menkes at the Times in 2013 (Menkes, who was critic for the newspaper’s international edition, defected to Vogue the same year), Friedman has become one of the most consistent voices in a fashion world torn by change at every level. Classic magazines and digital outlets have recently disappeared (Details and style.com have dissolved, Condé Nast sold its Fairchild fashion media portfolio), top designers have jumped ship or been ousted (Alexander Wang from Balenciaga, Raf Simons from Dior, Alber Elbaz from Lanvin), and iconic tastemakers have bowed out (Grace Coddington stepped down as creative director of Vogue after 25 years). Meanwhile, trends have swept by with such speed that the entire concept of a fashion “season” has become outdated. Throughout it all, Friedman has provided a wry, sharp critique of the frenzied spectacle.

To hear Friedman tell it, the road to her current status as the thinking person’s fashion critic was less a conscious decision—she had no formal design or journalistic training—than a series of happy accidents. “I wasn’t into fashion when I was young,” she recalls. “I liked looking at Vogue, but fashion was never a big part of my life. I certainly never thought of it as a career.” After graduating from Princeton, she lived in her native New York, working on the bottom rungs of Vanity Fair and The New Yorker. In 1996, newly married at age 28, she suggested to her husband that they move to Britain, not as a career step but as a spur-of-the-moment adventure: “One day I said, ‘Shouldn’t we go live in London?’ He said, ‘Sure.’ And so we did!”

It’s an inspiring parable for all freelance writers. In the late ’90s, after several years of winging it in the U.K., American Elle asked her to report on runway shows around Europe, mostly because she had begun writing for a string of top women’s magazines. It was assumed she must know something about fashion. “I’d never been to a show before then,” she says. The birth of her first child convinced Friedman that she needed a steady job, so she became an editor at InStyle’s newly launched British edition, although her beat was still as much about Hollywood and celebrity as fashion.

Everything changed in 2003, when she heard that the esteemed Financial Times was considering the creation of its first-ever section on fashion, a field the sober newspaper had studiously avoided for generations. Friedman had worked freelance for the FT before, so she applied to become the pioneer-ing editor. “There was a lot of skepticism there about the legitimacy of fashion as a topic,” she admits. “But I argued that fashion is a huge industry and thus a legitimate business story. And it turned out that the FT’s readers were really interested in shopping and clothes.” Still, shaping a major section from scratch was an uphill battle. According to Friedman, people in London were entirely bemused at the FT for the new beat it had adopted.

After 11 years at the job, word went round in 2014 that Cathy Horyn, her counterpart at The New York Times, was leaving. By then, Friedman was securely back in New York—she and her husband moved to Park Slope in 2008—and was intrigued by the opportunity to work for her hometown newspaper. “It was exciting and challenging,” she recalls of being offered the job. “The Times’s readership is so much broader than the FT’s. It was like going from a niche fashion house to a global behemoth.” Even so, moving to another newspaper allowed her to maintain her utilitarian approach to fashion. “Newspapers are rooted in daily life,” she says. “The magazines are monthly, with long lead times, so they are forced to think of fashion in a different time frame.”

Friedman has won a reputation in New York for her clear-eyed and witty commentary on all aspects of fashion and luxury. “The key to being a good critic is not taking clothes too personally,” she says. “I consider fashion’s importance in women’s lives, the history of the brand I am looking at, and what is going on with fashion in general.” Assessing if a garment works contextually is paramount for her. “For Vanessa, fashion doesn’t end at the runway,” says her editor at the Times Styles desk, Stuart Emmrich. “It doesn’t even begin there.”

Italian designer Miuccia Prada has long admired Friedman for her candor and approach. “She always investigates the deeper role that fashion has in culture and society,” Prada says. “I feel Vanessa’s work has been helping fashion in many ways, but mostly she has been constructively building a reputation for the fashion industry that’s definitely deserved.”

It is, by no means, a cakewalk. Today, Friedman has a brutal work schedule, traveling across Europe and the U.S., often writing in hotel rooms jetlagged at 3 a.m., and flying home on redeyes. “The job is not glamorous,” she says. “Although I don’t get any sympathy.” Her spare time revolves around her three kids, now aged 10, 13, and 15. “I go to a lot of track and swim meets,” she says. Her main recreation is the trapeze, which she practices at Streb in Williamsburg. She can even find trapeze partners when she’s in Milan or London for shows.

One of the central conversations in fashion today is whether it is moving too fast. “There are so many collections,” Friedman says. “It’s no longer just the four seasons.” This glut affects consumers as well. “It would be better if there was less stuff in general. You should treasure something and value it. That is what makes it worth all the money.” And it makes it harder for a critic. “In fact, the whole concept of a ‘season’ is an outdated category. You can find clothes for every time period in every collection.”

Then there’s the growth of ‘fast fashion,’ epitomized by brands like Zara, H&M, and American Apparel. “It’s wonderful that there is cool clothing available at an accessible price,” Friedman says. “But the attitude is that you wear something a few times, and instead of fixing it, you get rid of it. It’s a bad ethos.” She prefers to purchase sparingly, putting quality over quantity. “I buy one or two things a year and accumulate them. In fact, I realized that if I lost my suitcase while traveling it would be a huge crisis for me. Nothing can be replaced.” Of her favorites, she singles out pieces by Azzedine Alaïa and Dries Van Noten as well as jeans by Joe Fresh. “They are amazing for traveling,” she says of Alaïa dresses. “Not only are they good for fashion, but all designers love and appreciate him, so you can wear [them] to a show and the designer won’t be offended.”

She covers seismic fashion shifts, like the departures of Wang and Simons, as well as rising stars. At every level, one of the most delicate parts of the job is delivering negative verdicts. “It’s always hard to criticize designers because you know how hard they have worked on things,” she says. “But if you don’t, designers won’t value the praise when it comes. And I hope I deliver criticism in a constructive way.”

Some don’t always take it so well: Olivier Rousteing, creative director of Balmain, told The New Yorker in a profile published last October, “If she hits at me, I can say, ‘I don’t like it,’” in response to her review of his H&M collaboration. She hit at him again later the same month, writing in the Times: “But there is a fine line between calibrated excess and trash, between kitsch and chic, and Balmain straddles it largely thanks to its Paris atelier and the work that goes into the clothes.” Designers who feel slighted have often reached out to her directly to address unflattering reviews. “That is their right,” she says. “I always respond.”

Still, Friedman does admit that she has crept around shows with her head low, hoping to avoid a designer she has criticized. But so far has anybody thrown a glass of wine in her face? “No!” she laughs, eyes wide. “But that would be kind of exciting.”

In Search of Barbie Couture