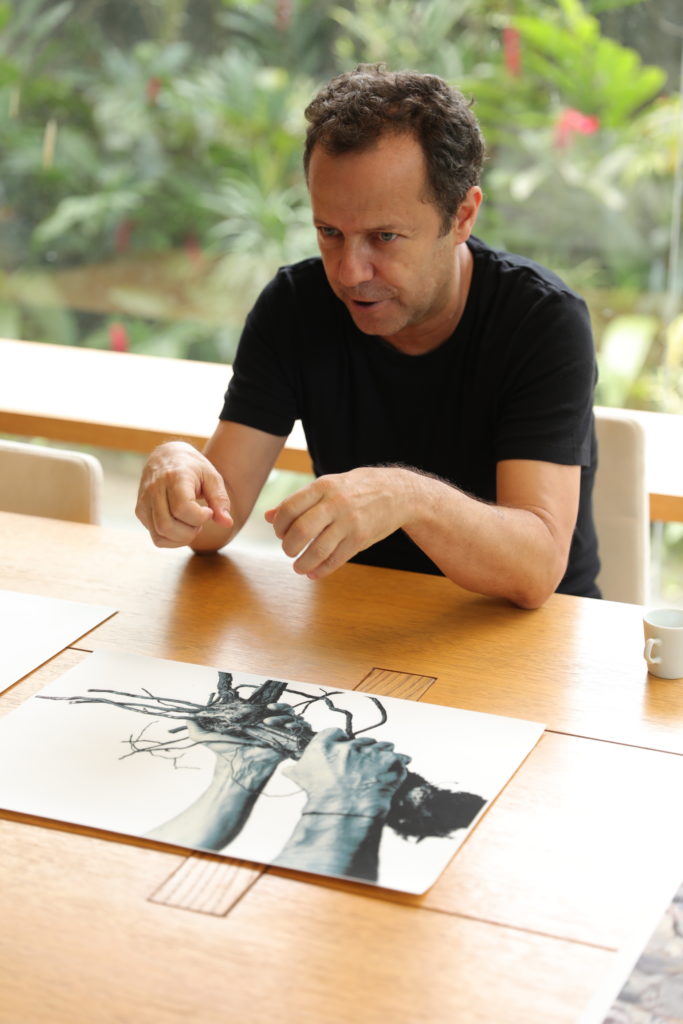 The multimedia artist’s collaboration with the champagne house is unveiled at Frieze New York 2019.

The multimedia artist’s collaboration with the champagne house is unveiled at Frieze New York 2019.

Titled “Shared Roots,” the series was inspired by Ruinart’s vineyards and pastoral setting in Reims, France, and was created as a part of its artist-in-residency program, which dates back more than a century. As part of the project, Muniz worked closely with Frédéric Panaïotis, (Ruinart’s cellar master) during the October 2018 harvest, to master the complexities of winemaking. He was especially taken by the twists and turns of the vine, and the way it reflected human nature.

“If you look at the natural forms [of the vine], it’s behavioristic,” he explains. “Frédéric would say that a plant is like this because it’s in very dry soil. It searches—it has this curiosity that makes the branches grow in specific ways.”

Those machinations are pronounced in each of the six pieces. For instance, “Flow Hands” was based on a photograph of Panaïotis’s hands grasping roots in the vineyard, and was later enhanced with the application of twigs, charcoal, and blackened wood sourced on-site. The added dimension and texture is classic Muniz, as is the human connection. “These works are like a self-portrait for me,” he said.

The series of photographs will tour more than 30 additional art fairs this year. Additionally, Muniz has also created an installation, “Chardonnay Leaf,” chalk cellars at Maison Ruinart, working in tandem with the company’s employees. The partnership, he says, has been synergistic. “They focus on the creative process,” he says. “And my work is about process.”

Designer of the Day: Jeff Martin