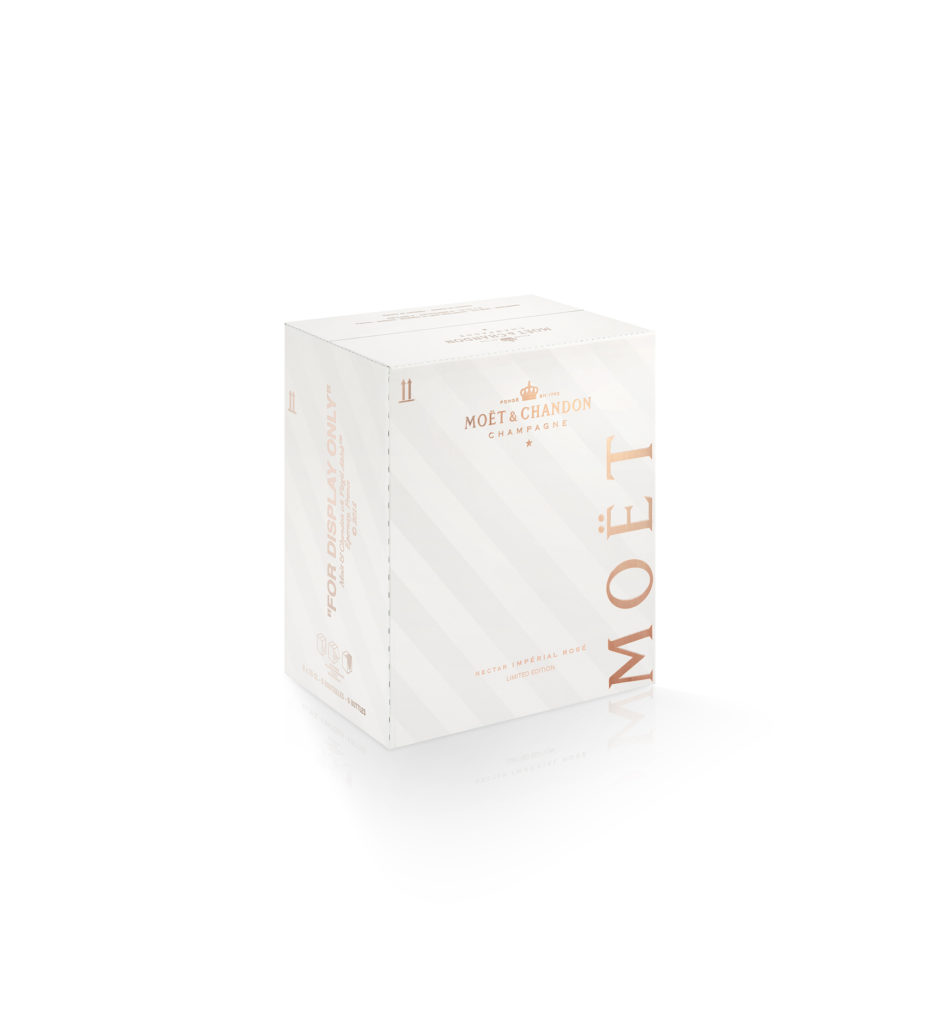 Virgil Abloh speaks in Helvetica. Universal and unemotional, that’s the sound of his voice you’re seeing when you read “keep off“ emblazoned on an Ikea rug, or “AIR“ on the soles of Nike Vapormax as they take off on the resale market. And if you’ve ever wondered whether there’s a deeper meaning behind it—what else can “Do Not Drop” evoke printed on a bottle of champagne?—the multihyphenate creative force sat down with Surface at The Mercer Hotel in SoHo, where he’s directed music videos for Lil Uzi Vert and A$AP Rocky, to discuss his latest collaboration with Moet.

After showing his debut menswear collection for Louis Vuitton, Abloh was tasked with tackling the spirits side of LVMH, designing a limited edition bottle of Moët Nectar Imperial Rosé, following in the footsteps of Public School and Marcelo Burlon. And while he often describes his signature quotations as a form of detached irony, there’s something sincere with his intentions here. Never mind the bottle—he doesn’t want you to drop the ball. “If you’re sipping champagne, the contents are the equivalent of celebration,” he says. “So my phrase is a poem: Don’t take either for granted.”

That’s something other champagne brands have done to their detriment at the height of their own successes. While the rap community devoted their lyrics and videos to promoting Cristal in the early 2000s, all that changed when, in 2006, the brand’s managing director Frederic Rouzzard was asked by The Economist how he felt about the champagne’s association with the “bling lifestyle.” He infamously responded: “What can we do? We can’t forbid people from buying it.” Overnight the yellow bottle lost its place in MTV rotation, was parodied on 30 Rock, and saw its unofficial ambassador Jay-Z pull the champagne from his clubs and took an ownership stake in a new brand, Armand de Brignac.

It’s a moment Abloh remembers, and one he likens to his own defining moment, three years later, crashing Paris Fashion Week as part of Kanye West’s entourage, and forcing the burgeoning streetwear scene to be part of the conversation with Parisian high fashion, not only passive consumers. “These are the tectonic plates of the culture,” Abloh says of the two events. “That’s how new methodologies are birthed. Every generation should feel that abrasiveness.” Still, his designs, for any product, aren’t about settling old scores. When your hallmark is detached irony, there’s nothing less cool than showing you’re emotionally invested. It’s one reason why Abloh didn’t even visit Epernay, where Moët is produced. “I visited Champagne in theory,” he says, noting it doesn’t impact his creative process. “I make clothes about movies I’ve never seen.”

After all, just because a collaboration is “with Virgil Abloh,” that doesn’t mean he has to display depth beyond the veneer of his name. He was just named as one of Time magazine‘s 100 Most Influential People; it’s clear he doesn’t need to give more of himself.

“That’s where it gets very deep and metaphysical,” he says, before questioning whether each of us isn’t more brand than man now. “You have a name. You have an image, an avatar. You make things. You are known as a brand. And then there’s you as yourself? I don’t think you’re able to detach. I don’t have different hats.”

This is why he’ll always feel a greater responsibility to the product than the culture, why he doesn’t want to focus on what he calls the “scorned past.” It limits his reach. “This is a bottle that, to me, is very linked to hip hop, but it’s not triggered by what hip hop might feel like. That’s what I find most interesting.”

Still there is a visual nod to Cristal in the bottle’s design. Cristal’s yellow bottles are in fact clear glass—a rarity in the industry—wrapped in yellow cellophane. And with Abloh’s Moët collaboration, he eschewed dark glass and overlaid graphics, so as to make the bottle’s contents more visible. “My idea was to make the bottle as clear as possible, just to see the product. The color [of the champagne] is beautiful and I want it to be as it would look in a glass.“

Abloh is acutely aware, however, that most of his bottles may never be uncorked. Many of his designs never make it out of their original packaging, appreciating as collectibles or flipped on eBay, Grailed, and StockX. That’s what informed his design for a more limited edition, magnum-only bottle available to his friends and family. “The larger version reads ‘For display only,’ because I wonder how much champagne or wine is sold and doesn’t get opened. I’ll preface this that it’ll be wrong, but I would guess that sixty-five percent never gets opened and just sits on people’s countertops on in their cellar—maybe more.” Not that it bothers him. His job is only to get the product off the shelf, and even though he swears he doesn’t look at resale prices of his products in the aftermarket, he sees his place there as a marker of success. “What I think about more is that it’s a metric to know that an idea has relevance, if it has an aftermarket,” Abloh says. “If an idea isn’t relevant, then it shouldn’t exist.”

“I’m still stuck on trying to make people covet things,“ Abloh admits. “There are a lot of choices, and I want to make something people want.“

And what Abloh finds his audience wants is something artificial in its rarity, like a tweaked sneaker only available at a certain hour, a mass-market furniture collection produced in limited quantity, or his first Louis Vuitton designs, which add toylike plastic hardware to the brand’s signature vinyl bags. “Luxury isn’t so much about is it expensive, is it shiny? There’s a unique generation that’s fine without typical luxury. But the one thing you can’t erase is desire.“

So who’s to say that a $60 bottle of Moët isn’t as delicious as a $200 bottle of Cristal if it’s selling for as much on the aftermarket. You’d have to open it to find out.