What Amazon HQ2 Could Have Been

It seems that plans for Amazon’s gargantuan second headquarters—which were slated to transform a vast plot of land on the Long Island City, Queens, waterfront—were a doomed endeavor from the get-go, despite being championed by New York governor Andrew Cuomo and mayor Bill de Blasio. Several factors soured the deal, including gripes about the city’s overburdened infrastructure, displacement of nearby Queensbridge Houses residents, and the potential importation of a tech monoculture that has rapidly gentrified cities like San Francisco, which now faces a dire affordable housing crisis. The most widely publicized concerns involved $3 billion in corporate subsidies offered to Amazon, the second publicly traded company to reach a market cap of $1 trillion. Why should New York City, which has recently struggled with a budget deficit in the billions, offer generous tax incentives to one of the world’s wealthiest companies?

Then the Valentine’s Day edict came. Citing local opposition, Amazon announced it would renege on its deal to move into Long Island City. “We are disappointed to have reached this conclusion,” the statement reads. “We love New York, its incomparable dynamism, people, and culture—particularly the community of Long Island City.”

Precedent, however, suggests otherwise. Tech companies have long drawn criticism for creating insular, amenity-rich campuses that quash diversity and encourage gentrification. If the campus offers food, coffee, and laundry, says Leslie Miley, a former engineering manager for Slack, Apple, and Google before becoming the Obama Foundation’s chief technology officer, “they have more disposable income to spend on housing.” Tech campuses result in not only disproportionately high wages, but scores of workers whose every need is sated except for housing. Cue rent spikes—the root cause of concern for New York representative Alexandria Ocasio-Cortez and senator Michael Gianaris, whose constituets live within the immediate vicinity of HQ2. The statistics don’t lie. Over the last five years, housing costs in Amazon’s current home of Seattle jumped by nearly 73%, and rents in the tech-heavy Bay Area are among the nation’s highest.

That’s not to say New York City isn’t equipped for a tech bonanza—it is more so, in fact, than any other major U.S. city. Former mayor Michael Bloomberg is largely responsible. After economist Steven Strauss suggested attracting the high-tech sector in 2008, Bloomberg launched a competition to build an applied-sciences university within city limits. That culminated in Cornell Tech’s nascent Roosevelt Island campus, which joins other world-class institutions such as Columbia University and New York University’s Tandon School of Engineering. Investing in up-and-coming tech talent has yielded grand returns—according to a report released by the New York state comptroller, the city’s tech ecosystem added 45,000 jobs (18% growth) from 2003 to 2013, far outpacing citywide employment growth at 12%. It’s safe to assume that Bloomberg predicted Amazon’s encroachment a decade in advance.

The design-savvy understand that from concept to ribbon-cutting, corporate campuses can take years to complete. Take Apple Park, the 2,800,000-million-square-foot neo-futurist headquarters in Cupertino, California, first announced by Steve Jobs in 2006. Apple’s chief designer, Jony Ive, worked with architect Norman Foster to specify every design detail down to window pane curvature and elevator button finishes. Apple Park didn’t open until 2017 and even then, it was still under construction. On the other hand, Google quietly leased 111 Eighth Avenue, famously with more square footage than the Empire State Building, at 2,900,000 square feet. And a few weeks before Amazon’s big announcement, the tech giant revealed plans to lease even more office space in the city’s burgeoning Hudson Park neighborhood—sans the public competition and pleas for government subsidies. In fact, most Chelsea residents agree that Google, despite the inevitable corporate largesse, is a good neighbor. Since its 2010 move-in, Google outfitted a youth technology center with new laptops and smartboards, recruited staff to teach computer science in after-school programs, and assisted elderly immigrants with Google Translate, not to mention donating $1.5 million to help preserve the iconic Stonewall Inn.

The Wall Street Journal reports that if Amazon’s Long Island City deal had progressed smoothly, the campus would reach full capacity of 25,000 employees by 2028. That nine-year time frame would have hypothetically afforded Amazon ample time to liaise with local officials, hear out the community’s concerns, and invest in designing a considered campus around the challenges posed by these parameters. Whatever the case may be, Amazon has spoken. And as poet Charles Bukowski once quipped, “In New York City, you’ve got to have all the luck.” It seems Amazon had no interest in testing their odds.

We asked five local firms: If Amazon entered Long Island City in an ideal world, what would their headquarters look like? How would HQ2 address the needs of Queensbridge Houses, an underserved community threatened by the unrelenting encroachment of luxury real estate? How would it innovate in the workplace design sphere? How would the $3 billion in government subsidies be invested back into New York City? While these questions may never see answers, these firms give it a shot. From pastoral to fanciful and pragmatic to humorous, here’s what they came up with. 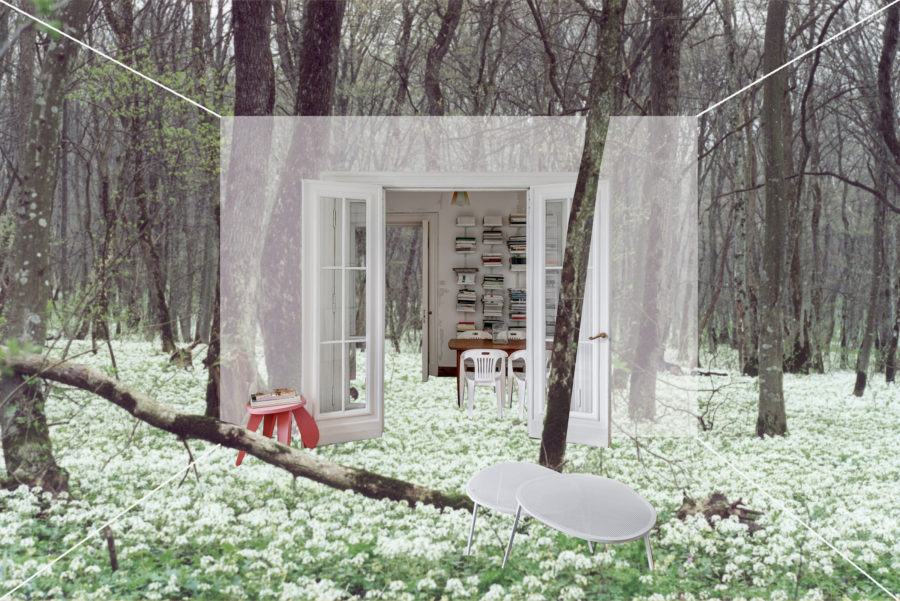 A jungle within the concrete jungle, I want to convey the feeling of being in a place that was created thousands of years ago—where you had no amenities and a simple thing like an elevator was far-fetched. I want to create this space relative to The Lost City—where nature wins over technology.

The building will be one big glass box. Everything surrounding the main entrance of the building may look like a forest but deep inside hides all the technology in different stories underground. The building will also offer a communal space and have full amenities. Each room will be focused on the idea of doing everything from your bed. Each worker will have a small room where they have access to everything they need in their bed. The room will be based on basic necessities—giving the person a simple life focused on Amazon. You can watch Amazon TV in bed, grocery shop on Amazon in bed, eat in bed, work from bed, essentially do everything you need to do from bed, because we live in a time where people are consumed with doing everything in one place. I want to make this room relative to Amazon, a space where you can literally find and buy everything you need. It will be a international hub for meeting people within the company and also living a lavish comfortable life. There will be no barrier between working and living. This will not only solve the problem of affordable housing in the area but will create a new meaning to the work-life convenience standard. The forest will allow people to feel safe and offer housing, and it will help in not overcrowding the subway. If employees choose to live elsewhere, the building inside offers a special railway that transports employees from the surrounding burrows underwater into the building.

“After a seven-day march through woodland, the traveler directed toward Baucis cannot see the city and yet he has arrived. The slender stilts that rise from the ground at a great distance from one another and are lost above the clouds support the city. You climb them with ladders. On the ground the inhabitants rarely show themselves: having already everything they need up there, they prefer not to come down. Nothing of the city touches the earth except the long flamingo legs on which it rests and, when the days are sunny, a pierced, angular shadow that falls on the foliage. There are three hypotheses about the inhabitants of Baucis: that they hate the earth; that they respect it so much they avoid all contact; that they love it as it was before they existed, and with spy glasses and telescopes aimed downward they never tire of examining it, leaf by leaf, stone by stone, ant by ant, contemplating with fascination their own absence.”

wHY
A Real Amazon Jungle

wHY’s proposal conceptualizes a real Amazon rainforest for New York City, a mixture of typologies combining the concrete jungle with the tropical jungle, and embodying the tangled and complex relationship between convenience, urbanization, and density. This Amazon Jungle within the urban jungle acts as connective tissue for the city, creating lush indoor-outdoor spaces that can be enjoyed by all. The green, elevated cityscape will contain individual communities, linked by fauna and flora, with circulation aided by a trunk that brings New Yorkers up and down from this new perch. Just as a trees and skyscrapers rise above their dense canopies to find light and space, wHY’s Amazon Jungle finds space for affordable housing, local artists and creatives of all types, while alleviating stress from New York’s aging transit infrastructure. 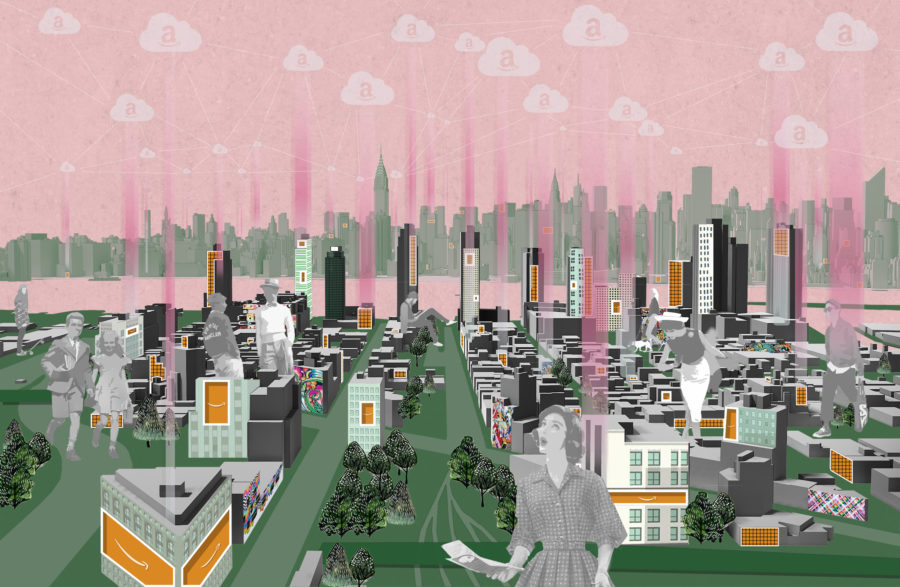 INC ARCHITECTURE & DESIGN
Breaking up with Amazon: A Case for Decentralized Urban Headquarters

Amazon is a corporate behemoth, currently employing more than 600,000 employees around the globe. In growing its ever-expanding empire, Amazon selected two new locations for additional headquarters—New York City and Crystal City, Virginia. Some have speculated that this split was intended to help stave off criticisms about the impact of HQ2 on the chosen cities, trying to avoid a repeat of Seattle, where even some of the best of intentions have failed.

We ask the question, why not take Amazon’s decision to split the headquarters a step further? Abandon an isolated complex of towers or “city within a city,” and move to a completely decentralized model.

Rather than snap up a new 4M square feet in real estate, seek out existing vacancies within New York and distribute the company’s impacts, both positive and negative, throughout the city. This proposal not only eliminates the possibility of losing affordable housing complexes to office towers, but also more equitably distributes the economic rewards of having Amazon in New York. It greatly reduces the stress on any one [train] line or mode of transportation and would encourage holistic improvements to the city’s infrastructure, rather than myopic upgrades to serve a central campus. Bringing Amazon down to human scale simultaneously reduces the amplification of its wants and needs, while elevating the voices of those that live and work in New York’s neighborhoods.

It’s 2020. Amazon HQ2 in Queens has never materialized. Public outcry concerning gentrification, congestion and unfair economic incentives finally dissuade Amazon from building their headquarters as planned. While the HQ2 battle rages in the public spotlight, Amazon focuses its architectural ambitions not on scale, but quantity. Amazon stops thinking like a 20th-century corporation and starts acting like a platform. Quietly, the company introduces a new venture: Amazone.

Amazone is the real estate arm of Amazon that acts as a platform for gigspace. Got a wasted closet in your apartment? How about some extra freezer space? Amazon leases by the minute and by the inch. Every space can be commodified at any time. Your underused corner or empty desk suddenly becomes an asset. Temporary walls will zone your apartment for new uses if necessary. Behind the curtain lies an Amazone. Amazon shifts its entire operation to circulation, relentlessly evading the atrophy and red tape of the built environment. Here one minute, gone the next.

Where to Go During Reykjavík's Design March