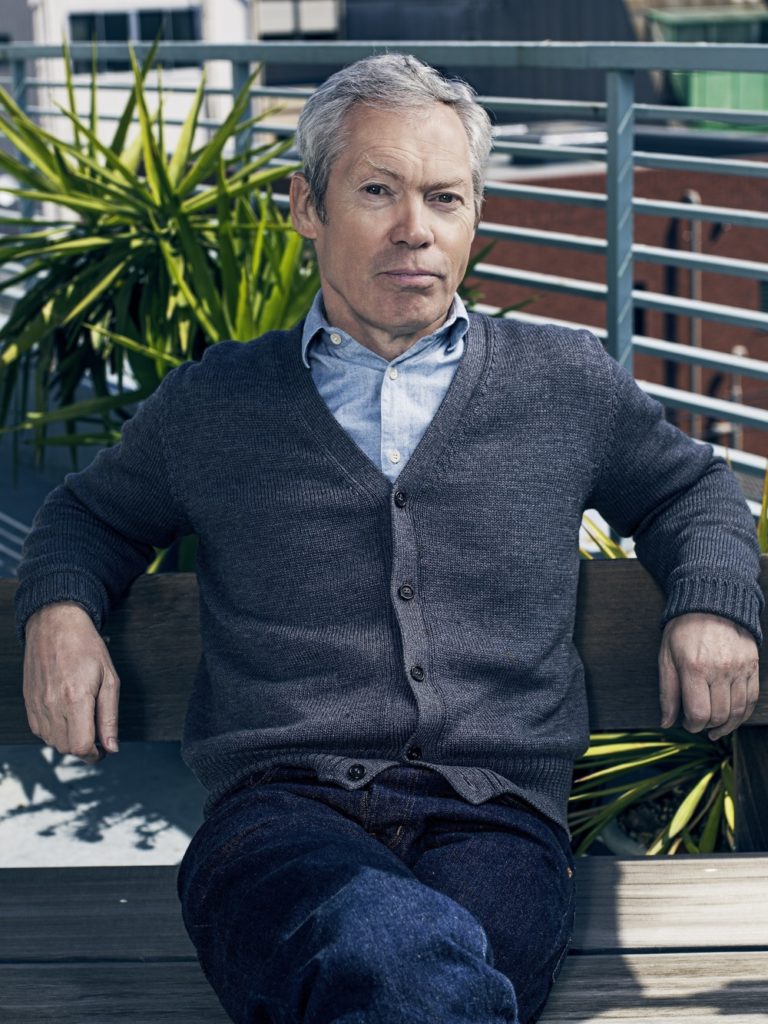 A recipient of the second annual Isamu Noguchi Award, the English product and furniture designer discusses his second home in Tokyo and his latest releases from this year's Salone del Mobile.

INTERVIEW BY NONIE NIESEWAND
PORTRAIT BY OGATA May 15, 2015
Share
Back

A recipient of the second annual Isamu Noguchi Award, the English product and furniture designer discusses his second home in Tokyo and his latest releases from this year's Salone del Mobile.

INTERVIEW BY NONIE NIESEWAND
PORTRAIT BY OGATA May 15, 2015

You were born in London, studied at the Royal College of Art, and founded your studio in the city almost 30 years ago. When did you move to Japan?

About eight years ago, I think. I had started to work for Muji and I met my now-wife there soon after.

What does living in Japan offer you that London doesn’t?

I think pretty much any locale offers something another place cannot, but the cultural differences are quite extreme and I enjoy switching between the two. When I’m in Tokyo, I lead a very local life; when I’m in Tokyo, I never stay still.

What does a typical day – if there is such a thing – in your Tokyo studio look like?

I don’t usually get to work until after lunch, but the studio, which used to be our apartment, is a small box on top of a bigger building with a large terrace around it. There’s a view of a river lined with cherry tree, which are spectacular in March and April. I have one assistant here, and we work very quietly for about five hours, drinking a lot of green tea. There’s no telephone or fax and no room for a workshop, but we use the terrace to make things occasionally. Of the three studios I have, it’s the most productive for me because the rest of the world is asleep for most of the day.

Do you think your design process or approach has changed since moving to Japan?

If it has, it’s just a result of having time to concentrate on things a bit more and not being disturbed.

You’re being honored with the second annual Isamu Noguchi Award-along with architect Yoshio Taniguchi – to be given in a ceremony at New York’s Noguchi Museum this spring. When did you first discover Noguchi’s work?

When I was about 16 years old, I spent about three months chiseling away at a block of granite with some blunt sculpting tools, and during that time – while learning sculpture was more work than it seemed – I discovered the work of Noguchi, Brancusi, Gaudier-Brzeka, Matisse, and others who inspired me.

What impression did Noguchi’s work initially make on you?

I liked the scale of it, and the abstraction, and also his work in other fields: the paper lights he did in Japan, the furniture, and the landscapes.

Your work is very clear-minded. The recent Noguchi Museum citation describes it as having “a quiet respect for materials.” How do you typically present or pitch your ideas to manufacturers?

Usually with a scrappy sketch and a verbal explanation, but occasionally, we develop something further before showing it.

What did you launch at this year’s Salone del Mobile?

A collection of Emeco chairs, called Alfi; the Superloon light for Flos; a new book on my design work with Lars Müller Publishers; a small table with the Danish company Fredericia; some follow up projects with Cappellini and Maruni; and an exhibition design for Molteni’s 80th anniversary.

You lead a whirlwind life of international deadlines and deliveries. Where do you go to seek inspiration or to just relax?

The best escape I know is to go and stay in a ryokan with a hot spring bath outside your room.

Tell us about your new Superloon light for Flos. What sets it apart from the rest of your lighting projects?

It’s a large flat white disc, which sits in a kind of gyroscope mounted on a tripod base, so you can spin it on two axes. It’s my first LED light, and quite a dramatic entry into that field, as most LED lights have been quite small so far. It’s simple, but gives out quite a lot of light at full setting. It’s both a powerful light source and an interesting presence – probably not made for small rooms, though!

Which of your many lighting designs gives you the greatest pleasure to live with or work near?

I’m sitting in a room with three of the existing ones, and each other is pleasing for a different reason and provides a very different kind of light. Hanging over the staircase there’s a Glo-Ball, which sends out a highly diffused light in every direction. Over the table, there’s a Smithfield, which sends an equally diffused light down on the table, and in the corner theres a Luxmaster, which is bouncing light off go the ceiling. I think you need these different types of light to make a good atmosphere in a room.

I have read it, and I loved it. It’s a book that the light-source people need to read now that the incandescent options are disappearing. We’ve lost a lot of subtlety for the sake of a few percent’s efficiency.

You’ve designed a lot of everyday, useful things for brands like Muji and Alessi. Do you find small-scale items are more or less challenging to design that larger ones?

No, I wouldn’t say so. They al have their special reasons for being complex in some ways, and was in others. For example, cutlery – which I have designed for Muji and Alessi – tends to be a question of a basic idea, which gives identity, good detailing, and balance. A chair is more of a puzzle, having to do with structure, materials, and a certain expression of character.

You’ve also designed many pieces for both Vitra and Cappellini. What is it about these two companies that attracts you and keeps you coming back to work with them?

I started with Cappellini in 1987 after Giulio Cappellini came to see me in London and with Vitra a year later after Rolf Fehlbaum sent me a letter expressing interest. They have both been patient enough to put up with my early mistakes, and happily, the relationships in both cases are very special. It’s much easier to work with people you get on well with and respect.

“Super Normal”, your joint 2006 exhibition with Japanese designer Naoto Fukasawa, seems to have had a large impact on your career. Now that nearly 10 years have passed, what’s your perspective on it?

It was one of those happy relations that you no longer have to think of a reason for what you’re doing. Everything fell into place for me, and I think I’ve done most of my best work since then.

Do you still have dialogues with Fukasawa?

Absolutely. We meet quite often in Tokyo.

Your work has become associated with the “New Simplicity” movement, of which you’re seen as a leading practitioner, How do you feel about this label?

It makes me laugh – the idea that simplicity might be anything new!

Is there any “-ism” or label attached to what you do that you dislike?

I only have one way of doing what I do and I’ve never paid any attention to labels, but the one that annoys me the most is being called a “Minimalist.”

If you were to throw a dinner party full of Japan-based designers and architects, living or dead, whom would you invite?

If you could pare down your feelings on Japan into a few words, what would they be?

I like things local / And the feelings of being / A stranger at home.

Designer of the Day: Cecilie Manz

Designer of the Day: Chris Halstrøm

The Unsung Utility of Knitted Textiles

This Virtual Lecture Series Offers a Crash Course in...

A Movie Theater Seat for the COVID-19 Era

Designer of the Day: Paris Forino

Beni Rugs Looks to Brazilian Modernism and the Bauhaus