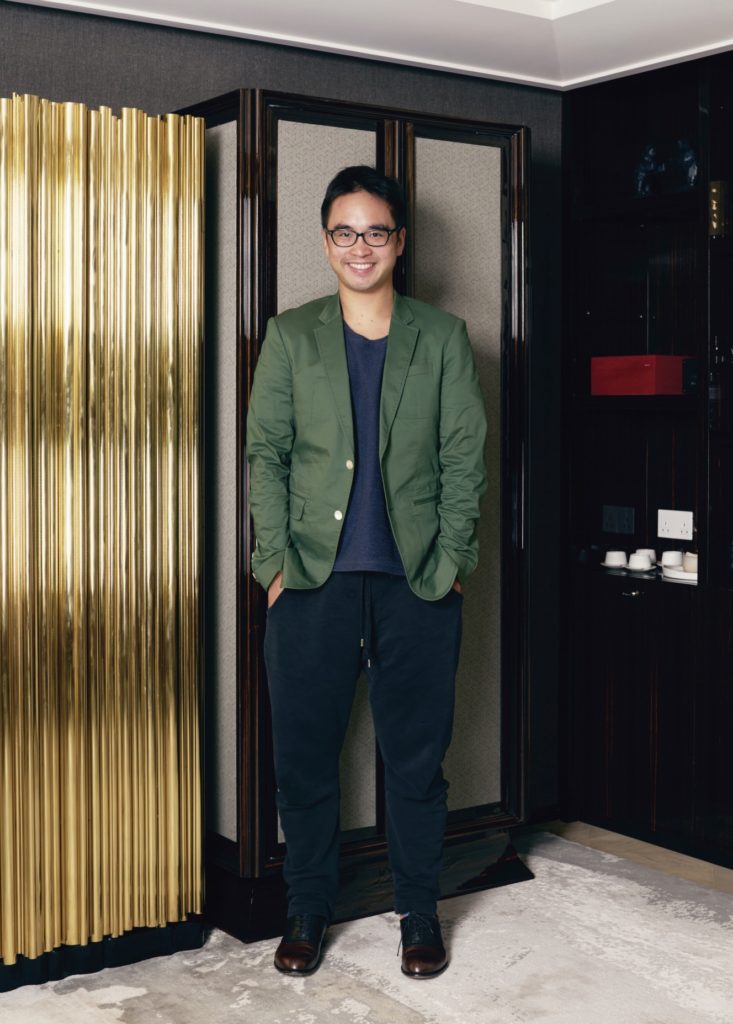 The founder of K11 Art Foundation wants to introduce emerging Chinese artists to the world.

By Nate Storey
Portrait by Egill Bjarki November 30, 2015
Share
Back

The founder of K11 Art Foundation wants to introduce emerging Chinese artists to the world.

Adrian Cheng thinks China’s on the verge of an artistic revolution led by a new generation of creatives, and he’s determined to be their springboard onto the global stage. Inside his office at the gleaming New World Tower, high above the Hong Kong cityscape in the Central district, the 35-year-old Chinese billionaire—he’s the scion to one of Hong Kong’s wealthiest families and his grandfather, Cheng Yutung, is No. 71 on the Forbes billionaire list—lights up when discussing the up-and-coming contemporary artists that are shaping his country’s cultural scene and his plan to introduce them to the world. “No one has ever seen an emerging artist foundation with this big, kind of crazy and bold ambition, started by a young, baby-faced Chinese man,” Cheng says about his non-profit K11 Arts Foundation (KAF), an incubator conceived in 2010 that provides financial support, promotional power, and studio space to emerging talent at an artist village in Wuhan. “It’s a little surreal to a lot of people in the West, because they’ve always had a certain perception of the Chinese.”

That makes the Harvard-educated Cheng, whose youth is pronounced in his cherubic face, puckish grin, and cool-kid glasses, somewhat of a gatecrasher in the highfalutin art world. The powerhouse institutions, however, have taken notice and are embracing his vision if not his renegade style. His attitude toward the arts would find compatriots in the disruption-minded tech firms of Silicon Valley. “The audience is getting younger, and the museums are trying to diversify,” Cheng says. “They don’t just want to talk about Van Gogh. You can’t do a retrospective every time—you need some new stuff.”

KAF is in the midst of a three-year partnership with Palais de Tokyo in Paris that puts on traveling co-produced exhibitions, like “Inside China: L’Intérieur du Géant,” which highlighted six young Chinese artists chosen by the museum’s curator, Jo-ey Tang, and Wang Chunchen of Beijing’s Central Academy of Fine Arts Museum. (The show, which was up for a year, wrapped in November.) Another collaboration, with Paris’s Centre Pompidou, was announced this year. It will focus on a three-year research project led by the museum’s newly appointed Chinese curator to identify pieces to add to its permanent collection.

In October, KAF teamed with London’s groundbreaking NTS Radio to create “Enter the Dragon,” an installation by Shanghai multimedia artist Zhang Ding at the prestigious Institute of Contemporary Art. Inspired by the classic Bruce Lee film of the same name, ICA’s theater was transformed into a massive mirrored sound sculpture and featured dueling D.J.s from the U.K.’s famed underground music scene. It was essentially, as Cheng puts it, “Chinese Studio 54.”

He says projects like these are an illuminating portrait of his country’s next-wave artists, who focus less on national politics and social topics than their ’90s predecessors, and are more inclined to explore their position in the global community through their work. “There’s no borders if you’re a great artist,” Cheng says. “We started to have this vision of creating Chinese contemporary art domestically, but also connecting to the world and cross pollinating with international artists.” At home, Cheng is aiming to make art more accessible by meeting people on their level, a strategy that has borne out in unconventional initiatives that appeal to the masses. For instance, he knew the Chinese have an affinity for shopping complexes, so he opened two art malls with robust permanent collections and rotating exhibitions. At the one in Shanghai, works by Spanish surrealist Salvador Dalí are currently showing; in Hong Kong, the site is hosting the recently unveiled “Event Horizon,” Antony Gormley’s sculpture installation of 31 fiberglass busts of his body. Cheng claims it’s the most extensive public art program in the city’s history. “Art and culture are a part of life, so it should be a part of Chinese life,” Cheng says. “I see them come to the museums, look at paintings for hours, get inspired, and feel cleansed. I’m just giving them a place to experience this process.”

Next year, the foundation will open Beijing K11, another high-end retail-art space hybrid. “We’re trying to democratize art in China and build a new ecosystem because it’s different than in the States, where the institutions and ecosystem are already built. Contemporary art only started here around 35 years ago,” Cheng says. “You’re starting to see more proper museums opening, the younger generation starting artist-in-residence programs, but audience grooming is still a problem because it’s not part of the education system.” Cheng’s mission: Solder the fragmented artistic class and give them a platform. Facilitate partnerships and raise awareness abroad. Educate the public at home. “We want to build a community—it doesn’t have to be all-Chinese—where people can think and be inspired with the institutions and museums and be together,” he says. “A new generation club with no members’ fee.”

As for his personal collection, Cheng isn’t really sure how many works he has, but estimates around a few hundred. Not surprisingly, the pieces are mostly by unheralded names. He isn’t all that eager to talk about what’s hanging on his walls at home, anyway. His enthusiasm lies in the foundation, which he sees as the window into China’s emerging artists. “We aren’t a dealer. We don’t have an agenda. We’re very neutral,” Cheng says. “I want them to become artists of the world, where people can pronounce their names—China isn’t just about a 5,000-year history. The contemporary generation is giving people a new perspective on what it means to be Chinese.”