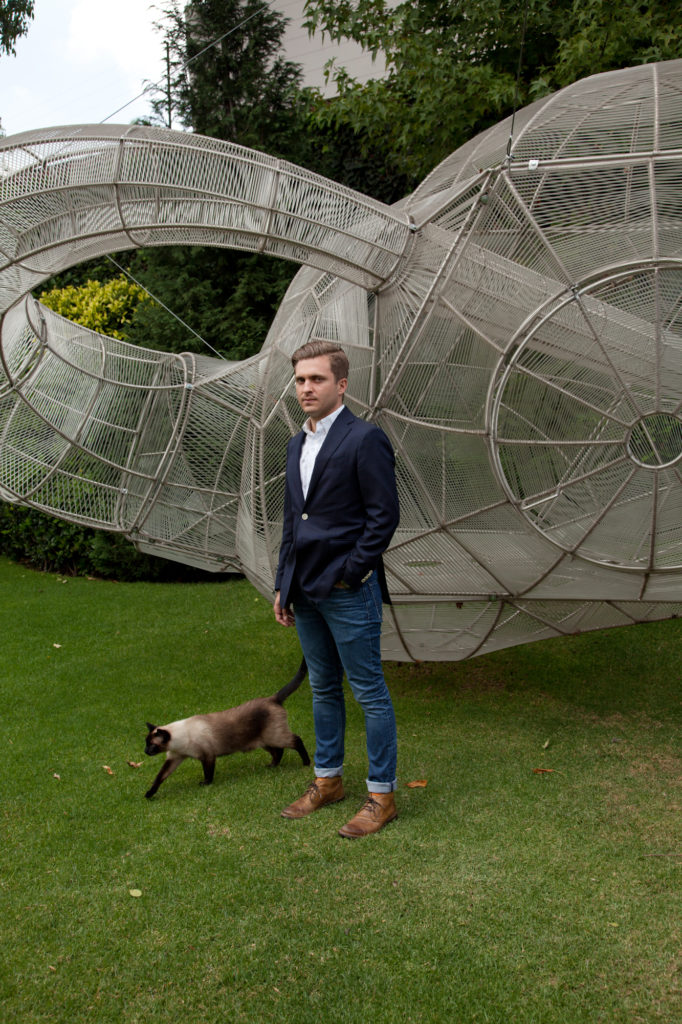 The director of Fundación Casa Wabi in Oaxaca brings a research-focused approach to the institution.

BY SPENCER BAILEY
PHOTOS BY YVONNE VENEGAS November 30, 2015
Share
Back

The director of Fundación Casa Wabi in Oaxaca brings a research-focused approach to the institution.

About a decade ago, Moises Cosio Espinosa was frustrated that he just couldn’t seem to understand contemporary art. Attracted to “alternative practices in music and culture” from a young age, for whatever reason the Mexican-born entrepreneur just wasn’t able to wrap his head around the works of many living artists. “I just remember one time I saw this white canvas with white paint, and the question arose: Why is this art?” he says.

“I wondered why people were putting this in museums.”

Espinosa, 31, soon met the curator Patricia Martin, who had recently left her role as director and senior curator of Mexico’s Colección Jumex, and asked her to help him get a grasp on it. (Martin is now director of Fundación Casa Wabi, an interdisciplinary arts institution in Oaxaca, and a senior advisor of AXA Mexico’s contemporary art collection.) The first contemporary artwork to truly strike him was the video installation “When Faith Moves Mountains” (2002) by the Flemish artist Francis Alÿs. “In the Spanish language, we use the phrase ‘faith moves mountains’ a lot,” he says “[Alÿs] actually got people together with shovels to move a dune.” Discovering this piece was a breakthrough moment for Espinosa: It helped him to understand that art is more than just about technique.

This research-based approach to art has become the focus of the Fundación Alumnos47, a non-profit that Espinosa launched in 2012. Operating on a nontraditional model, the foundation is currently based in an old house in Mexico City’s San Miguel Chapultepec neighborhood and is opening a cultural space designed by Didier Faustino there this month. The enterprise also includes a publications wing, which just published Conversations in Mexico, an archive of 14 interviews conducted by curator and Serpentine Galleries co-director Hans Ulrich Obrist with “pioneers in Mexican art and culture.” Espinosa says he has no plans to open a gallery space anytime soon—or ever.

The reason Espinosa started the foundation can be summed up in one word: inclusion. When he and Patricia toured galleries, they were given special treatment, complete with champagne and backroom receptions. “I realized then that the art world is really exclusive, not inclusive.” This didn’t sit well with him. Alumnos47 is all about access. He even goes as far as to suggest that a place becomes exclusionary once art is hung on the walls, and as such, the foundation won’t be doing that. “It was really important for me in the foundation to not have art,” he says.

This isn’t to say, though, that Espinosa himself hasn’t been buying art. Over the past decade he has amassed a collection of 110 works by modern and contemporary artists including Jimmie Durham, Pablo Helguera, Piero Manzoni, and Hiroshi Sugimoto. When Espinosa can—in part because he doesn’t have a gallery—he partners with museums, galleries, and other institutions to exhibit the pieces he owns: Currently on view at the Redcat gallery in Los Angeles is the exhibition “Hotel Theory” (through Dec. 20), which includes parts of a piece he owns by Pedro Reyes. (The work, “Baby Marx,” was also shown at Minnesota’s Walker Art Center in 2011.) Espinosa is currently in talks with a museum—he won’t say which one—to give the institution his entire collection.

Though he’s certainly ambitious, Espinosa sees himself as an amateur collector, and he doesn’t pretend to be anything more. “For me, it’s not about having a specific piece,” he says. “It’s about talking about it. In that way, I’ve always felt like I’m a weird kind of collector. It’s more about understanding something than owning it.”

Art patronage and collecting wasn’t necessarily an expected course for Espinosa, who was born in Mexico City to a businessman father who ran the Las Brisas chain of hotels and a mother who today works with recovering addicts in jails and leads a treatment center. (Espinosa’s father died when he was 12.) His closest connection to art was through his grandfather, Manuel Espinosa Yglesias, who collected works by artists like Diego Rivera and others of that generation. A banker who was the director of the Mexican financial group Bancomer from 1959 until 1982—when Mexico nationalized its banks and the government took all of them over—Manuel turned to philanthropy in his later years; he passed away in 2000.

With Alumnos47, which Espinosa says is entirely self-funded through inheritance, the focus is about supporting artists, bold social ideas, and the art-making process. Collecting remains on the periphery of Espinosa’s agenda.

“For me, art is less and less about the object and more about the thought process,” he says. “It’s really important to support and understand art as a way of social criticism.” Within that criticism, Espinosa admits, there’s plenty of conflict—largely because of the predominantly very wealthy few who buy the work. As Espinosa sees it, the art world is inherently rife with paradoxes, and through Alumnos47 he is in part seeking to acknowl- edge, explore, and find potential solutions to them. “The art world is a perfect contradiction to art,” he says. “You see all these artists protesting social things, and what they’re protesting against is exactly what the art world is—and what we collectors are. I’m trying to work through this.”