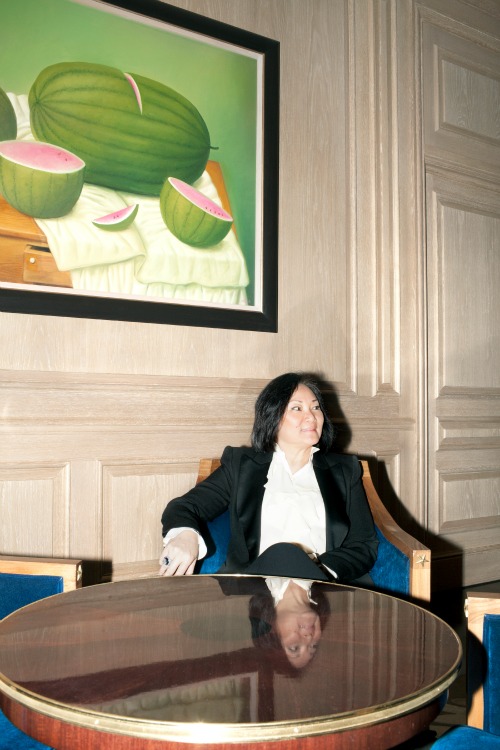 The editor, curator, and collector is a fixture on the global art scene.

By Hally Wolhandler
Portrait by Anja Schori November 30, 2015
Share
Back

The editor, curator, and collector is a fixture on the global art scene.

Gigi Kracht knows artists and seems to be on a first-name basis with many of them. Jeff (Koons), Fernando (Botero), and the late Louise (Bourgeois), to name (drop) a few.

Thirteen years ago, she wasn’t involved in the art world at all—though she was interested in the subject, and had been given a Bruegel painting and Miró lithographs by family. One day, over breakfast at home in Zurich, that all changed. She and her husband, Andrea, the sixth-generation owner of the city’s famed Baur au Lac hotel, were discussing what she should do with her time now that their youngest child had left home for boarding school. He suggested she write, adding that she might start by calling up the artist Fernando Botero, who was then staying at their hotel (and had been a frequent visitor for 30 years).

“I called him and said, ‘Fernando, my husband wants me to write, and I think you’re the most famous person I know who is at the hotel today, do you want to meet me for breakfast?’” Kracht recalls. The 10 a.m. meeting ended up lasting until 4 p.m. Kracht published their conversation as an article in Views, Baur au Lac’s in-house magazine. Since then, she has interviewed more than 175 artists, including Louise Bourgeois, Christo and Jeanne-Claude, and John Chamberlain. So started her life as an arts writer and patron. “I became a serious collector that day,” she says of the meeting with Botero.

These days, she’s a fixture on the global art scene. Besides editorial duties at Views, she’s the curator of an annual exhibit called “Art in the Park”; a voracious collector who travels the world finding new works; and a member of the International Directors Council for the Guggenheim. “Gigi’s parties and sculptural projects at the hotel are well-known,” says Richard Armstrong, the director of the Guggenheim. “Within a few minutes of our first meeting a few summers ago, I was overwhelmed by her infectious enthusiasm, and she’s become a great ally of the Guggenheim as well as a personal friend.”

Indeed, she makes friends as prolifically as she buys artwork. “When I write about people, they become my friends,” she says. “Louise sent me drawings on wrinkled paper, which I’m very happy to say I have in my private home. And I was invited to Chamberlain’s memorial at the Guggenheim.” Her affiliation with Louise Bourgeois sparked an interest in finding and promoting female artists, though it’s not always easy (“It’s just that it’s difficult to find a woman artist that’s not replicating a man,” she says).

Botero was also the catalyst for her side act as a curator, when he suggested Kracht use the Baur au Lac’s outdoor space for an exhibition series. “He said, ‘Gigi, you’re the only one with space right in the middle of town. You should do something during Art Basel, and I’ll lend you my fat woman,’” Kracht remembers. Thus far she’s done 13 iterations of “Art in the Park,” which premiers each year on the Sunday before the fair. The series has hosted work by the likes of George Condo, Robert Indiana, Yves Klein, and most recently, Allen Jones.

The Klein show in particular represented a real coup: Kracht says both New York’s Metropolitan Museum of Art and MoMA were interested in displaying the exhibition of blue busts on columns, a staging the artist had envisioned but never carried out. How did Kracht’s yard beat out two storied institutions? “Because of my strong affiliation with Rotraut,” she explains, referring to the artist’s widow, Rotraut Klein-Moquay, whose work Kracht had previously bought and displayed. Klein-Moquay was also drawn to the venue’s location in front of a hotel. “She said Yves had envisioned it in front of Caesar’s Palace in Las Vegas,” Kracht says. “Another hotel about 35 years ago thought about doing it, but then it went bankrupt. So Rotraut decided to create the exhibition with her own money and to give it to me.”

Kracht does not only collect works but also commissions them, buying special pieces from artists like Pat Steir (who she calls her “favorite living artist”) as well as Jani Leinonen and Botero. Her collection of 40 contemporary artworks also includes pieces by Robert Klippel, Richard Serra, Chantal Joffe, and Donald Baechler. She describes her drive to buy as highly personal, based solely on an indescribable instinct of excitement that is not about appreciation or the name of the artist. “Collecting is not about just buying a Jeff Koons sculpture,” she says. “People who buy those things are show-offs,” she says without irony. “I know Jeff, but it does not bring me anything. That’s not art, that’s money, and I leave that to my husband.”