Jouin Manku Is Bringing the Stars Back to Sin City

Alain Ducasse’s new restaurant inside the Delano Las Vegas has an ethereal touch.

Not long ago, the 64th floor of the Delano was open to the elements. The former Mix restaurant had run its course—it was a product of turn-of-the-millennium extravagance that felt out of place in the post-crash world—so the original Parisian design team, Jouin Manku, came back to the scene to create something new. “The floor-to-ceiling windows needed to be replaced,” recalls partner Sanjit Manku, “so there was a moment during construction when the whole space was completely open air, nothing but a single long table with construction lights overhead. It was magical. We almost wanted to keep it that way.”

Instead, they did the next best thing: bring the elements indoors. The new restaurant Rivea, has a warmer, softer look than its predecessor, with a menu of Italian Riviera-inspired cuisine by acclaimed chef Alain Ducasse. “In Vegas, you get so much sun,” says Manku, pointing out the one similarity between Sin City and the towns of Portofino, Sanremo, or Varnazza. “But here, you never see the clouds or stars.” So Jouin Manku set the design mission accordingly, beginning with the lofty ambition of bringing the stars and clouds back to Sin City. Two nebulous overhead formations greet guests at the entrance, each one painted in high-gloss metallic blue car paint that reflects off the tinted glass walls. “They’re magnified and multiplied at the same time, almost like they’re being projected into the outdoors,” says Manku.

Rivea is glamorous in a modern way: toned down, more human, with a strong feeling of wonder. It retains only one piece from the original space, bubbles chandelier that has since been copied in nearly every city around the globe. The tables, tucked into curved fabric-covered booths, feel semi-private, and have custom built-in champagne holsters that pop up from a hidden compartment with the push of a button. (This is Vegas, after all.)

The main dining area puts a new twist on maritime décor, with a three-dimensional wave wall made of blue-toned plexi-glass tiles that’s a sort of pixelated interpretation of the shimmering Mediterranean. A massive horseshoe-shaped, mahogany banquette anchors the room, with enough seats for40 and the elegance of a Riva yacht.

For the stars, head to the private dining room, where a brass-paneled ceiling is outfitted with light bulbs meant to portray the constellations in the Nevada sky. At the adjacent Skyfall lounge, a nightspot by the team behind the groundbreaking Death & Co. in New York, amorphous forms on the ceiling resemble clouds that join purple hues, honey gold accents, and red furniture pieces to evoke the sunset. Both have dead-on panoramas of the cityscape.

“The design can’t talk over the view,” says Manku, pointing to the Strip below. But clearly, the two can harmonize. 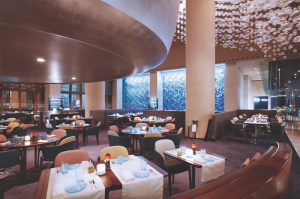 A Hospitality Brand for the Post-Pandemic Future