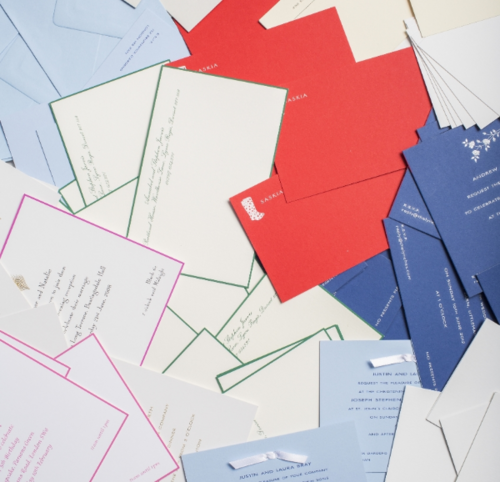 Author Elliott Holt on the Waspy Allure of Smythson Stationery

Author Elliott Holt shares her thoughts on Smythson and the hand written note.

By Elliott Holt
Photograph by Michael Ryterband September 15, 2015
Share
Back

Author Elliott Holt shares her thoughts on Smythson and the hand written note.

My favorite joke goes like this: “Why don’t Wasps have orgies? Because there are too many thank-you notes to write.” I feel entitled to tell that joke because technically, I’m a Wasp, even though I’m not particularly Waspy. I grew up in Washington, D.C., and learned to waltz at age 9, but my family didn’t conform to most Wasp stereotypes. My father is from Alabama and my mother was from Ohio, and they always felt like outsiders in the preppy milieu in which they raised their children, despite being Ivy League–educated. They sent my sisters and me to private school, but they went into debt to pay the tuition. Unlike many of our classmates, we didn’t take ski vacations in Vail or “summer” in Maine. We weren’t members of Washington’s most posh country club and our parents weren’t listed in the Green Book, the city’s anachronistic social registry. But there is one Wasp tradition to which we always subscribed: the prompt writing of thank-you notes. It’s etiquette I continue to practice religiously; a proper note means so much more than a hastily composed email. And for years, I’ve been writing those notes on stationery from the London company Smythson of Bond Street, which I discovered when I moved to England in 1999. Smythson, which was founded in 1887 and is purportedly the Queen’s official stationer, uses dye stamping—“the highest form of printing,” according to the company’s website. When I ordered my bespoke paper, Smythson engraved my design onto copperplates, dye stamped it onto their watermarked paper, and then stored my personalized plate for future orders. I have engraved note cards and letter paper, with envelopes lined in my chosen navy blue tissue, and whenever I run out—which happens often, given my penchant for old-fashioned correspondence—I order more. It’s not cheap, and as a writer with a modest income, I can’t justify the cost. But I love writing on my stationery; it’s a tactile experience—I can practically feel the ink from my pen seeping into the page. My name—raised and sharp and intensely blue—looks Waspy on that paper. My stationery suggests that I’m more blue-blooded than I actually am. After a childhood spent knowing I didn’t quite belong, every thank you I write feels like an attempt to claim membership in an archaic club.

Elliott Holt is the author of You Are One of Them. Her writing has appeared in The New York Times, Slate, Time, Virginia Quarterly Review, and in the 2011 Pushcart Prize anthology.

Drink Up to Wind Down: The Rise of Snazzy...

Why Do All Millennial Companies Look and Sound the...

David Yurman Has a Side Hustle Creating Themed...

How We Could Have Predicted Kanye’s...

Manhattan’s Starrett-Lehigh Building Is Covered in...